10 Questions About THE NIGHT PORTRAIT 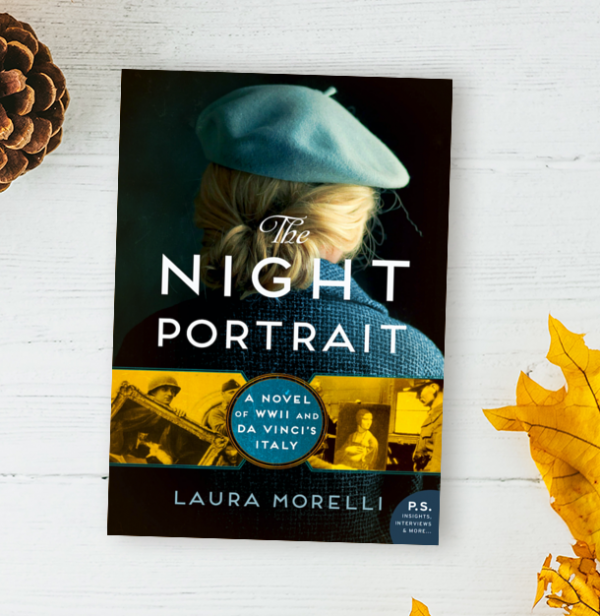 1. Where did the idea for this book come from?

Few parts of World War II were more brutal than the Nazi invasion of Poland. So when, a few years ago, my teenaged son Max invited my husband and me to watch a TV documentary about Hans Frank, the Butcher of Poland, my first reaction was to recoil and bury myself in a novel set during the Italian Renaissance instead. But my son (who, incidentally, was born a short drive away from Milan’s Castello Sforzesco) had grown into an avid, knowledgeable World War II buff. As a small kid, he knew all the plane models and major players from the Normandy beaches to the Pacific theater. He interviewed World War II veterans as part of his Eagle Scout project. He loved to play the board game Axis and Allies, and yes, he always won. So in the name of family time, I joined my husband and my son on the sofa.

The 2015 documentary “What Our Fathers Did: A Nazi Legacy” included interviews with Niklas Frank, the son of Hans Frank. I found myself immediately wrapped up in the incredible story, but when Niklas Frank described how Leonardo da Vinci’s Lady with an Ermine had once hung on the wall of his childhood home in Bavaria, it stopped me dead in my tracks. Truth is often stranger than fiction, but how on earth did that happen, I wondered?

I did what I always do: I plunged headlong into research. What would it be like, I wondered, to be the person tasked with the job of stealing a painting by Leonardo da Vinci? The curiosity led me down rabbit hole after rabbit hole, until a story told in two timelines emerged clearly in my head. Edith and Cecilia suddenly seemed as real to me as my next-door neighbors. After that, the book seemed to write itself.

Fiction titles are tricky things… They have to be just right for the genre. My agent suggested THE NIGHT PORTRAIT as a title that might inspire readers to pick up the book and see what it was about. It also resonated with the fact that the portrait traveled back and forth across Europe under cover and often at night.

3. How long did it take to write this book?

About a year. That’s super-fast for me! 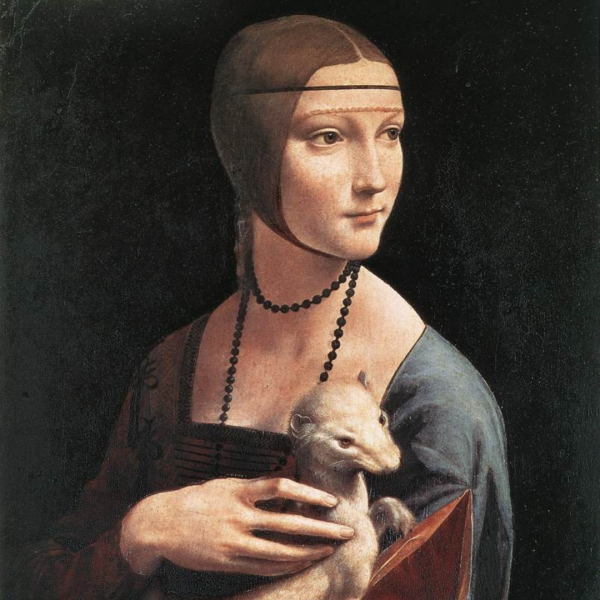 4. What happened to Cecilia Gallerani after Leonardo da Vinci painted her portrait?

Cecilia became an esteemed author, musician, and patron of the arts. The son she bore with Ludovico Il Moro, Cesare Sforza Visconti, was dedicated to monastic life and became abbot of the Church of San Nazaro Maggiore in Milan. Cecilia also bore four more children with the other Ludovico, Count Ludovico Carminati de Brambilla, known as “Il Bergamino.” Cecilia ultimately presided over one of the most celebrated courts of northern Italy, drawing artists, writers, nobles, and politicians from across Europe. She lived to an old age and even befriended Beatrice’s older sister Isabella d’Este, one of the most influential women of the Italian Renaissance.

5. What were you thinking about as you developed these four very different characters?

I wanted THE NIGHT PORTRAIT pinned squarely on the historical record, but my goal was also to bring these two very different eras to life. I want readers to ask themselves what they might do in similar situations. The four different narrators deal with challenges that sometimes seem insurmountable. I believe historical fiction allows us to relate emotionally to the larger human experience. Following a protagonist’s story makes us ask what we would do, facing such challenges. An immersive historical tale allows us to understand how we are connected to the long threads of history.

6. How did you approach the research for this book?

Historical research is my passion and joy! I always start with primary sources–things written at the time.

For the Italian Renaissance, there are so many great primary sources. My personal favorites are legal accounts. Sometimes the laws are so weird! And consider that laws are only made when someone does something considered egregious at the time; it really helps you understand what a culture valued and what they condemned.

Of course, the World War II-era is full of fantastic sources, everything from the transcripts of the Nuremberg Trials to personal war diaries.

When reading primary sources, it’s interesting to consider what people choose to focus on–and what they omit. I also find the cadence and tone of the language important for framing the book’s setting and the characters’ mindsets.

For me, the fun of historical fiction is taking the facts as far as they go, then realizing there’s a whole lot of stuff we don’t know. It’s like putting together a complex jigsaw puzzle with a bunch of missing pieces. You make up the rest.

7. How do you balance the fact and fiction in a historical novel?

But the nature of studying history is to realize that many details are lost, even from the recent historical record. For me, that’s where imagination takes over, and the fun of fiction begins! I think the best characters for historical novels are those with only a tantalizing handful of known facts.

At a certain point, I’ve only done my job if all this research “disappears” for the reader. If a reader picks up a historical novel rather than a history book, they want to embark on an immersive journey to the past. A historical novel has to deliver a great story above all.

8. How did you approach the moral questions this book raises?

One of the themes of this book is the relative value of art vs. a human life. All the characters struggle with this question—especially Dominic, our fictionalized Monuments Man in the story.

Many German art professionals who were conscripted to the Nazi effort to “safeguard” works of art—functionaries like the fictional Edith Becker—quietly returned to their lives and their jobs after the war. A few of them later spoke about their attempts to assist the Resistance, either by documenting stolen works, saving convoys from bombing, or returning works to their original owners. Others undoubtedly took these secret activities to the grave.

I wondered what it must have been like to have to make these choices. Probably no one pursuing an art history career in the 1930s could have imagined themselves in such a strange and challenging position. But many early readers of The Night Portrait have told me that the story has confirmed their faith in the crucial importance of art to a culture—and the power of individual action. 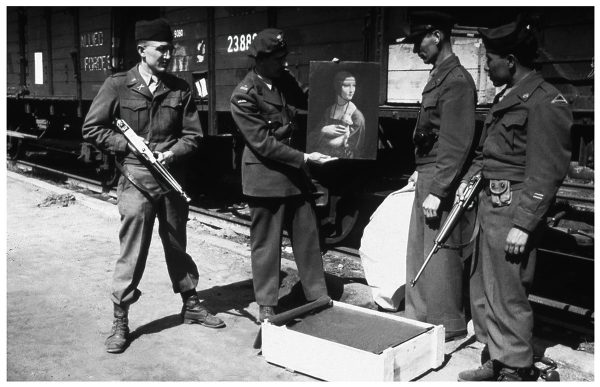 9. Powerful men determine so much about the lives of Edith and Cecilia yet each of these women pursues her own needs and desires. How is that?

Part of what drew me to this dual-timeline story was to realize that this portrait was an object of desire for two powerful men separated by 500 years. What was it about this woman—Cecilia Gallerani—and her likeness that was so captivating? Why did Ludovico Sforza of Milan, and later Hans Frank, Nazi-appointed governor of Poland, HAVE to possess this picture?

Part of bringing women in historical fiction to life is to place them before realistic challenges. For a woman living at the turn of the sixteenth century, that would have meant choices about marriage, motherhood, and religious life. When Cecilia Gallerani agrees to become the mistress of a man like Ludovico Sforza, she has to own the stakes and consequences of this choice, because there’s no going back to chose something different.

During World War II, many art professionals like Edith Becker would have probably told us that they had no choice. Saying no meant risking their lives. So, how could a woman in the household of one of the most ruthless Nazi leaders have exerted some control over the situation? What was within her power to change? This was a compelling question for me to ponder.

10. Are you surprised that The Lady with the Ermine didn’t go missing?

Yes! The scale of the Nazi effort to confiscate works of art is simply staggering. Given that so many priceless objects were moved all over Europe as if pieces in a great chess game, it’s amazing to me that so many works went safely back to their owners after the war. In fact, it seems like a miracle! The Lady with the Ermine itself traveled so many times between 1939 and 1945. It could have been lost or destroyed so easily.

Part of the Nazi “story” was that they were safeguarding works of art so that they didn’t fall into the hands of Jewish collectors or museums. Of course, the opposite was true!

BONUS: Why did you write Leonardo da Vinci’s character in the first person?

Because that’s how his voice came to me! I started researching this book by reading Leonardo’s point-by-point “resume” sent to Ludovico Sforza. After “hearing” his voice in this letter and in other of Leonardo’s writings, it was impossible for me to write his chapters in any other way. I hope you enjoyed it!

Drop a comment below and let me know what else you’d like to know about The Night Portrait!