A HISTORY OF NEAPOLITAN NATIVITIES

A HISTORY OF NEAPOLITAN NATIVITIES

They lure us with their facial expressions: proud, sad, joyful, lewd, angelic, humorous. Few Italian traditions have this ability to pull at our heartstrings, to surprise and delight us, to make us laugh out loud. Neapolitan presepi (nativity figures) and pastori (pastoral figures) have delighted viewers for several hundred years, and they still draw visitors to the San Gregorio Armeno quarter of the city, where the tradition of making these modeled figures by hand remains vibrant. More than any other artistic tradition, Neapolitan presepi (called o’presebbio in Neapolitan dialect) encapsulate the spirit of the city—dramatic, Baroque, dark, animated, and funny all at the same time.

A profoundly Roman Catholic region, southern Italy’s craftspeople turn out some of the world’s widest selection of high-quality, artisanal works of Christian art.  Naples—with its love of unrestrained funeralizing, the Baroque, the macabre, and the melodramatic—is the natural home for some of the most extravagant religious scenes in the world.

PRESEPI VS. PASTORI: WHAT’S THE DIFFERENCE?

Today, both presepi and pastori are made of terracotta and/or papier-mâché, and—just as in everyday Neapolitan life—the sacred and profane coexist seamlessly in the elaborate ensembles. 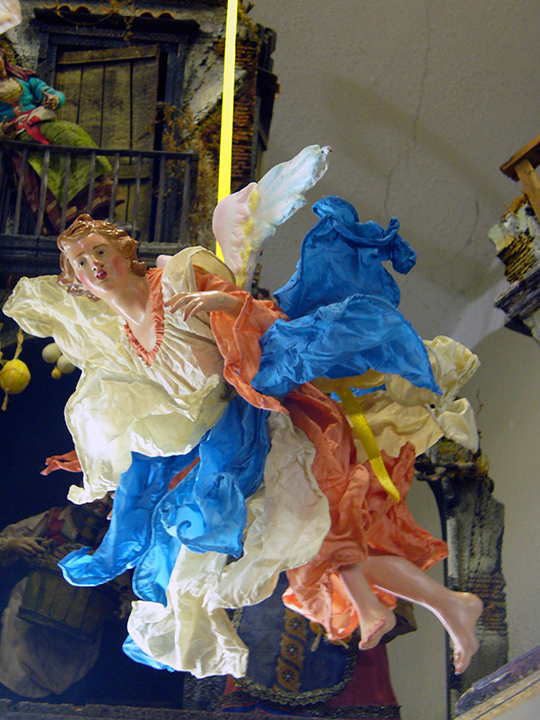 HOW IT ALL BEGAN

According to legend, the tradition of nativity scenes began with Saint Francis of Assisi, who first reenacted the birth of Christ with live animals and actors for a public audience in the central Italian town of Greccio in 1223. The first mention of a presepe in Naples comes about a hundred years after this, when a nativity with the Virgin and baby Jesus is documented inside a church in the city. There is also mention of a presepe set up in a private home chapel in Amalfi in 1324. By the mid-fourteenth century, Neapolitan sculptors were beginning to design elaborate sculptural ensembles with life-sized figures inside the city’s churches, and the birth of Christ with his parents emerged as a popular subject. By the second half of the fifteenth century, ecclesiastical and private patrons engaged Neapolitan artists to create large-scale sculptural groups inside the churches and private chapels of their city. Elaborate religious groupings crafted of wood, terracotta, and other materials began appearing across town. Whether representing the birth or death of Christ, or any number of other well-known Christian subjects, over the course of the 1400s each one became more elaborate than the next.

In contrast to the concept we have today of sculpture as white or grey, the vast majority of these works, in the tradition of medieval sculpture, were originally formed of wood or terracotta, then covered with brightly colored pigments and gold leaf. In the 1470s, the sculptor Pietro Alamanno was tasked with creating a nativity group of no less than forty-two painted and gilded sculptures for a private Neapolitan chapel. The Alamanno family of sculptors also created other nativity groups for the churches of Sant’Eligio and Annunziata. Over the following decades, Neapolitan sculptors would erect elaborate sculptural groupings inside the churches of San Domenico Maggiore, Santa Maria La Nova, San Gregorio Armeno, and many regional churches. Guido Mazzoni’sPietà, created in the church of Sant’Annadei Lombardi, features life-sized, glazed terracotta figures with writhing bodies and grief-stricken expressions powerful enough to reach out and touch even today’s most jaded viewers.

In 1532 a Sorrentine nobleman named Matteo Mastrogiudice commissioned the sculptor Domenico Impicciati to create the earliest documented paesaggio—or landscape—filled with nativity figures, to be installed in Mastrogiudice’s private grotto. According to the documentation of this commission, only the figures of Mary and Joseph were to be painted, while the other figures were to be left in oiled terracotta. 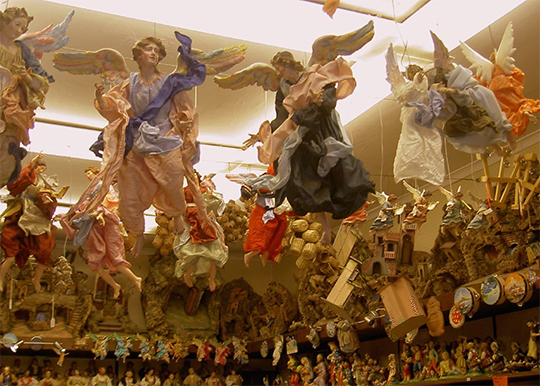 By the second half of the sixteenth century many historical documents attest to similar private commissions for wooden or painted terracotta ensembles. For ecclesiastical patrons, these sculptural groups served as powerful images to catechize people during the Counter-Reformation.Around the same time, other important centers of nativity production began to spring up in Italy, including Rome and Lecce, as well as elsewhere, including Murcia and Valencia, Spain; in Marseille and the Provençal region of southern France; and in the Alpine region of Südtirol. Each of these centers developed its own particular style, and the Neapolitan presepe tradition quickly formed its own distinctive personality. Neapolitan sculptors created figures on both large and small scale, and became masters of mixed media, creating nativity scenes and dramatic groupings of saints and angels crafted of wood, terracotta, stone, and its most distinctive medium—papier-mâché.

Papier-mâché—known in Italian as cartapesta—is one of southern Italy’s most astounding artistic media. Neapolitan sculptors began crafting statues in papier-mâché on a wide scale in the 1600s as a cheaper alternative to stone, terracotta, and wood. In addition to its economic benefits, papier-mâché also provided infinite creative possibilities, as it was easy to add to and modify the design mid-project.

By the 1700s papier-mâché figures filled churches, civic buildings, and homes throughout southern Italy. Although religious figures made up a large percentage of the figures crafted in cartapesta, sculptors also made animals and pastoral characters—shepherds, peasants, and other workers of various types from bakers to innkeepers, shoemakers and butchers—all engaged in traditional activities and daily life. Their typically Baroque forms, with bright colors, dramatic poses, and a love of heavy, billowy drapery, appealed to the fancy, ornate Neapolitan taste of the 1700s. Smaller-scale figures became popular collectors’ items.

By the mid-seventeenth century the landscapes and scenes in which figures were displayed had become incredibly complex, some with ruined temples, reflecting the interest in antiquity that accompanied the amazing new discoveries at Herculaneum (discovered in 1709), Pompeii (discovered in 1748), and other regional archeological sites.  They often showed the annunciation to the shepherds, with many of animals involved. Finally, a tavern background became popular, probably based on the gospel story of the Holy Family being turned away from an inn.

True to Neapolitan culture, the sacred and secular worlds collided. Suddenly water-sellers, bar maids, politicians, peasants, and shepherds took up places alongside saints and the Madonna and Child. Neapolitan peasants attend the birth of Jesus. These elaborate landscape and architectural settings allowed the Neapolitan popular imagination to run wild, including many stereotypical figures of daily life on the streets of Naples, figures that would be humorous to a contemporary audience, as well as representations of abundant food.

THE HEYDAY OF NEAPOLITAN NATIVITIES

The heyday of Neapolitan presepi and pastori was the eighteenth century, when Neapolitan pastorai enjoyed the patronage of King Charles III. Francesco Celebrano, one of the most important Neapolitan artists of the day, made a large number of presepi for the royal family, but he also was a renowned royal painter and also the director of modellation for the royal porcelain works, the Real Fabbrica di Porcellane a Capodimonte. Giuseppe Sanmartino was another noted master of mixed media who enjoyed royal patronage. Some of Sanmartino’spresepi are now housed in the Museo San Martino, one of the city’s best places see presepi of this period.

Interestingly, this heyday of Neapolitan presepi corresponded with the flourishing of Neapolitan theater. King Charles founded the Teatro di San Carlo as an opera house in 1737, even before Milan’s La Scala and Venice’s La Fenice. Setting aside the role of royal patronage, the two arts of theater and nativity scenography were closely intertwined. The Neapolitan Baroque love of theatricality married perfectly with the Neapolitan aesthetic, and when designing their elaborate landscapes, nativity makers had to have a sophisticated sense of mise-en-scene to appeal to audience of regular theater-goers.

By the mid-1700s pastorai sought to make their figures appear more dynamic, more theatrical, more “alive” than ever before. They crafted wooden bodies with heads and limbs hinged with iron attachments. They designed various sets of clothing made from silk, satin, brocade, velvet, and other sumptuous materials. Each figure was designed from the start as a flexible mannequin that could be repositioned and dressed in a different way, a veritable stage set with a changing panorama. Each year at Christmastime, these figures could be brought out an arranged in a new, theatrical way. Terracotta heads were painted by hand, eyeballs were crafted of blown glass, and wigs were fashioned with real hair. Workshops evolved to handle or outsource the various media to craft each figure.

Pastori were considered special enough to be given as royal gifts: when King Philip V arrived in Naples from Spain in 1702 to ascend the throne, he was presented with a group of them crafted by some of the city’s best-known pastorai. Naples’s aristocracy and bourgeoisie followed suit by collecting significant numbers of presepi. The Prince of Ischitella, Emanuele Pinto, became a noted collector of presepi, displaying examples in every room of his palace, specimens made of wood, silver, terracotta, wax, and papier-mâché. In 1743 alone, he purchased 132 pieces, including not only figures but animals, silk clothing, jewelry, and other accessories. The following year he commissioned the pastorai Francesco de Leonardis no less than 182 new pieces. Giovanna Battista AragonaPignatelli, duchess of Terranova and Monteleone, also boasted a vast collection of pastori displayed in complex scenography. For the Neapolitan bourgeoisie, collecting presepi and pastori developed as much as a hobby as a devotional aid, an enjoyable pastime to be shared with friends and visitors. During the 1700s, the city’s pastorai began to standardize production in order to churn pieces out more quickly. The standard scale of pastori became established at a third life-size (terzina), measuring between thirty-five and forty centimeters high.

Through the nineteenth century, the Neapolitan Bourbon court continued to keep the tradition of erecting nativity scenes alive but the tradition declined somewhat toward the end of the century. By that time, nativity production became concentrated around the church of San Gregorio Armeno.  Although there was still a robust demand for higher-quality pieces among collectors, presepi had become more available to the masses, not just nobles and wealthy bourgeoisie. The size of the works became smaller, the quality declined as terracotta replicas were stamped out in molds, and prices began to fall. On the other hand, the introduction of electricity allowed for new creative experiments, such as lighting grottoes or the shepherd’s star, and even mechanizing the figures themselves and bringing the scenes to life.

Today, a few pastorai continue to create works faithful to presepi of the 1700s, with heads of terracotta, poseable bodies, and clothing of silk and satin. These figures, of course, command higher prices than the cheaper trinkets churned out in terracotta molds. Today some 200,000 terracotta figures are made for the nativity trade in Naples annually, a third of which are produced in San Gregorio Armeno, while others are produced elsewhere in the city or on the outskirts. Every year those pastorai making terracotta figures for the tourist trade come out with funny version of figures from popular culture, politics, the papacy, and celebrities.