Adventures in Artisanship And the Challenges of Tourism in Venice

Adventures in Artisanship And the Challenges of Tourism in Venice

The first time I visited Venice as a wide-eyed teenager, I knew I was supposed to go home with Murano glass but I had no idea why.

All I knew was that my friend and I were lured to the famous “glass island” of Murano by a fast-talking hawker in the Piazza San Marco. We were whisked onto an overcrowded, stinky boat. Arriving on Murano, we were pressed into a bustling group of international travelers. We strained to see over the shoulders of other visitors as a glassmaker placed a long blowpipe into a red-hot furnace. As if by magic, he transformed a molten blob into a beautiful vase. Afterward, we waited in line behind several dozen American and Japanese tourists to pay an exorbitant price for a small trinket. My purchase—a small green fish—brought an end to the bewildering experience.

It’s telling, I think, that a naïve girl raised on a farm in America might already have a notion of Murano glass—and other artistic traditions like carnival masks and gondolas— as synonymous with Venice. Though it was my first visit, I already had an idea that “Made in Italy” meant a spirit of tradition and recognition around the world as a benchmark of quality.

Even after my Murano glass-buying debacle, it was the artistic traditions of the world that continued to compel me to travel, and they inspired me to pursue advanced studies in art history. Over the subsequent years, Venice continued to lure me above all.

If you described Venice to someone who had no prior knowledge of it, they might think you were making it up, that it was a place existing only in a fairy tale. It’s mind- boggling to think that the entire built environment of Venice—everything from the humblest coffee shop to the grandest church—stands atop thousands of wooden pilings driven into the mud centuries ago. Venice has been described as “impossible,” and I think that’s a good way to capture its essence.

Today, when I stroll along the alleys and quaysides, I imagine what Venice must have been like some five hundred years ago: a city-as-artisanal-factory, its doors open to the streets, its wares spilling out onto the cobblestones. It is easy to conjure the ring of the blacksmith’s hammer and aroma of hot coals from the forge; to imagine woodworkers, painters, and gilders sweeping sawdust flecked with red pigments out into the alleys from the thresholds of their doors. That’s because, in spite of cycles of decline and renewal in its artisanal enterprises over the past centuries, Venice maintains its place as a world capital of the handmade, the beautiful, the richly colored, the impossibly ornate.

Once I began graduate studies, I quickly learned that none of it—not the glass or the masks or leather or pottery or gilding—could be found in my art history textbooks.

Instead, I learned about the great Italian artists of the past—Leonardo da Vinci, Michelangelo, and many others. But I knew that there was much more than the names that filled my art history books. The medieval craft guilds may be long gone, but the techniques, the skill, the forms, the knowledge, the spirit of Italian tradition is still intact in world-class objects like Murano glass, Florentine leather, maiolica ceramics, even Parmigiano-Reggiano cheese and grappa. These traditions are kept alive in the hands of thousands of Italian artisans who take pride in their regional specialties, so ingrained that even in the twenty-first century the products of their labor are recognized around the world as a mark of quality.

Once I realized the importance of artisanal tradition within Italian culture, I was riveted; I wanted to know everything! It was the beginning of a journey that would take me from the Alps to Palermo and become my obsession for more than a decade. I traveled to Sardinia to watch an 88-year-old woman swiftly work a wooden hand loom her grandmother had taught her to use when she was only five. I journeyed to Umbria to watch a ceramicist paint a rabbit on a terracotta pot, drawing inspiration from a five- hundred-year-old ceramic fragment at his side. I went to the gastronomic capital of Parma to watch an inspector poke an aging ham hock with a horse-bone needle and draw it under his nose to rate its quality compared to thousands of similar specimens he has tested over four decades. And yes, I returned to Venice many times. Eventually, I compiled my work into a guidebook called Made inItaly.

Over the course of my fieldwork, it was the stories and the people behind these great traditions that captivated me, that kept me moving forward. The contemporary Italian artisans I interviewed, one after another, told me how important it was to them to pass on the torch of tradition to the next generation.

After hearing this story multiple times, I began to wonder what would happen if the successor were not willing or able to take on the duty of carrying that torch of tradition. And as I interviewed the last remaining gondola makers of Venice, the story of The Gondola Maker, my first work of fiction, began to take shape. The Gondola Maker follows the story of a young man who, as the eldest son, is positioned to inherit his father’s gondola-making boat yard. But because of his complicated relationship with his father, not to mention an unexpected family tragedy in the boat yard, he believes that his destiny lies elsewhere. Soon he finds himself drawn to restore an antique gondola with the dream of taking a girl for a ride.

My second novel, The Painter’s Apprentice, forms a prequel to The Gondola Maker and follows the story of a young woman who wants nothing more than to carry on her father’s legacy as a master gilder, but finds herself swept up in the drama of the plague outbreak that ravaged Venice in 1510. 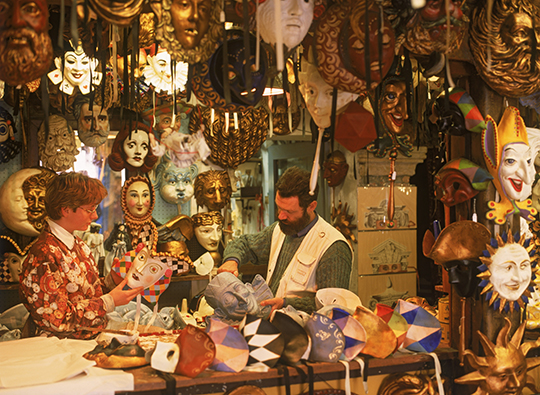 THE EFFECTS OF MODERN TOURISM

As I have returned to Venice over the years—whether to interview artisans, research a novel, or just to enjoy myself or share it with friends—I have watched the flood of international tourists transform the city. Over many trips, I have come to understand that the effects of modern tourism are complex, but that they are not universally bad. The modern tourism industry finds its origins in Venice in the early 1970s, with an initiative that began with the well-intentioned desire to reinvigorate the economy of a crumbling old city. Venetians who remember that era have told me that the city was remarkably quiet back then, full of generations of Venetian families but without the staggering volume of international visitors that the city drawsnow.

Today, the downsides of tourism are particularly hard-felt: the crushing crowds, controversies surrounding cruise ship traffic, the challenges of water and waste management, and—significantly for me—the problem of cheaply made souvenirs imported from overseas and passed off as authentic. Increasing numbers of carnival masks, glass objects, and other souvenirs flood into Venice, and it’s not easy for today’s casual visitor to tell the treasures from the trash. Carnival masks, for example, are imported from Asia and passed off as authentic every single day on the streets of Venice. This is true now more than ever before.

Tourism is not all negative, however. The influx of international visitors to Venice means that the appreciation for important historical arts is continually renewed, and there are more resources to support craftspeople. Some Venetian traditions, such as the making of carnival masks, had all but died out until the tourism industry was bolstered in the 1970s. In recent decades, individual makers and family enterprises have planted a flag in the soil to preserve the legacy of the handmade. In the last twenty years, local organizations have sprung up to help sustain and promote artisans who choose these careers, and the Internet has provided many new opportunities.

Still, let’s face it: shopping in Venice can be overwhelming. We all want to go home with a special souvenir, but selecting which Murano glass vase or which lace handkerchief to buy can become a bewildering experience. How do you know if you’re buying something authentic, something made in Venice, something made in a traditional way? How do you gauge how much you should pay, and how do you know if you’re being ripped off? How do you determine if you have fallen prey to one of the city’s many tourist traps?

Recently art organizations in Venice have worked to develop trademarks and new alliances to help protect their artistic heritage and to guard against fakes and cheap knockoffs. Legal regulations have also tightened. However, many Venetian artisans tell me that the well-meaning organizations that try to promote traditional artisans are not able to keep up in the face of the overwhelming numbers of visitors. And many visitors do not take the time to understand the historical trades. Instead, they go home with a small trinket made overseas. Either they do not know the difference, or do not care.

Over the last decade, I have personally seen multi-generational artisan shops in Venice close their doors—including paper makers, bookbinders, mask makers, and glass artisans. When I saw my favorite mask-making shop and my favorite paper-maker close their doors forever, I felt as though I had been kicked in the gut. At the same time, I do understand the pressures as well as the tough family decisions that stand behind each closure.

Surely there is some happy medium between accommodating the crowds and preserving the past in this one-of-a-kind city? In terms of authentic shopping, the truth remains that there is no substitute for a knowledgeable buyer. If you know what you are buying, you can put your money where it counts: back into the pockets of Venetian makers and not into those of importers looking to make a quick profit without any connection to Venice at all.

For centuries, Venice has appeared to visitors as a surreal vision, a city rising from the swampy Adriatic lagoon as a complicated jumble of rivulets, exotic palaces, mosaic- encrusted churches, Gothic façades, and candy-striped gondola moorings. A feast for the eyes, Venice takes time to absorb. Even after the years of study, Venice still captivates me like the first time I saw it. I know that I am not alone.

Decades after my first visit to Murano, my little green glass fish still sits on the windowsill of my study as a testament to my love affair with Venice. In choosing to write about the history of Venetian craftsmanship, I hope to have played a small role in preserving Venetian spirit for new visitors who are as wonderstruck as I was, the first time I watched this “impossible” city unfold from the back of a boat.