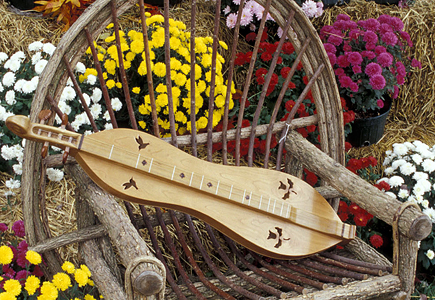 A cheerful strumming sound fills the air of a coffeehouse outside Knoxville, Tennessee. The dulcimer player, a man with a bushy white beard, plies the strings stretched tautly across the hourglass-shaped box on his lap, smiling as his foot keeps time with the beat. From his graceful instrument wafts a sweet twang that sounds both melodious and distinctly southern.

The mountain dulcimer, also known as the Appalachian dulcimer, is the product of a rich craft tradition. Although there are mass-produced versions of this unique folk instrument, most dulcimers are handcrafted one at a time by individual luthiers. These instruments help preserve the distinctive musical heritage of the central and southern Appalachian Mountains, covering West Virginia and parts of Virginia, Kentucky, North Carolina, and Tennessee.

Music historians have attempted to find the roots of the mountain dulcimer among European stringed zithers, especially the German scheitholt. However, it seems that for the most part, mountain pioneers developed the instrument on their own in the early 1800s. The settlers of the Appalachian Mountains—a self-sufficient bunch hailing from Scotland, Wales, Germany, and England—remained isolated from the rest of the country, and preserved the ways of their pioneer ancestors for generations. Their music traced its roots to English and Scottish ballads, both haunting and happy, and their lyrics chronicled stories of survival, love, and hardship in the wilderness. Over time, folk music evolved into one of Appalachia’s most enduring and distinctive cultural traditions, and the mountain dulcimer became its voice.

The mountain dulcimer consists of a wooden box, usually in an hourglass or teardrop shape, though it may be made to resemble a lozenge, trapezoid, or other form. Traditionally the instrument is strung with three or four strings, but occasionally has more. Sometimes accompanied by banjos, mandolins, or singing, at its best the mountain dulcimer is a solo instrument, and may be played in a variety of ways, depending on the sound the player wants to achieve. Some players use a pick, a bow, or even a turkey or chicken quill to pluck or strum the strings. The dulcimer is usually laid flat across the lap, although some play it like a guitar, hanging from a strap around the neck. It can also rest on a piece of furniture as it’s played.

The shape and size of the instrument, as well as the type of woods used to construct it, influence the quality of the sound. Originally, luthiers used roughed planks of hardwoods native to the region, such as walnut or maple, to craft the back and sides of the dulcimer, while reserving softer, more resonant woods like spruce for the soundboard. The boards were fastened together using hide glue, made from melting down animal hides, bone, and connective tissue. They cut sound holes in the shape of hearts, scrolls, diamonds, stars, and other designs, and used wire to fashion frets, pressing them into slots cut into the fretboard. Wooden pegs formed the tuners, and wire or gut strings were stretched across the body of the instrument. Dulcimers were varnished with lacquer or oil, or simply waxed for a more rustic appearance. Several regional variations of dulcimers developed, a measure of the geographic seclusion of these early craftspeople.

Although Appalachian music remained regionally isolated up until the 1920s and ’30s, the American folk revival movement in the 1950s and ’60s spread Appalachian traditions—including dulcimers—across the country and around the world. This renewed interest in folk music and culture brought new developments to the mountain dulcimer. Instrument makers added frets and strings, experimented with a greater variety of woods, and made other modifications to achieve a wider range of sounds. They began to use mechanical tuners, and experimented with artistic inlays on the fretboards, from mother-of-pearl to shells and ivory.

Today small groups of dulcimer enthusiasts—makers, players, and teachers—keep the passion for this instrument alive. One of the best places to learn more about dulcimers is at one of the workshops or performances organized during the fascinating dulcimer festivals that take place across the Appalachian states and beyond. The most popular include Kentucky Music Week and Mountain Dulcimer Week sponsored by Western Carolina University.

Today, the art of mountain dulcimer-making lies in the hands of a few stewards of traditional folk culture scattered across Kentucky, Tennessee, North Carolina, and Virginia. Several of the craft’s most esteemed artisans have passed away in the last two decades, but fortunately, a few others have moved in to continue this tradition. You can expect to pay a few hundred dollars for a traditional handmade dulcimer, and up to $1,500 for a finer instrument—a relative bargain considering that some artisans may deliver a custom instrument only after a period of weeks or months. Whether you want to learn to play or to collect a dulcimer as a piece of history, it’s hard to go wrong with one of America’s most distinctive craft traditions.

Tell me… Have you encountered a beautiful, handmade musical instrument in your travels? Comment below and let me know!