AUTHENTIC SHOPPING IN NAPLES & ALONG THE AMALFI COAST

AUTHENTIC SHOPPING IN NAPLES & ALONG THE AMALFI COAST

For a first-time visitor, Naples can prove an overwhelming experience. All of us want to come home from Italy with a special souvenir, but selecting what to bring home can be intimidating. How do you know if you’re buying something authentic and high quality, something made in the region, something made in a traditional way? How do you gauge how much you should pay, and how do you know if you’re being ripped off? How do you determine if you have fallen prey to one of the city’s notorious scams? 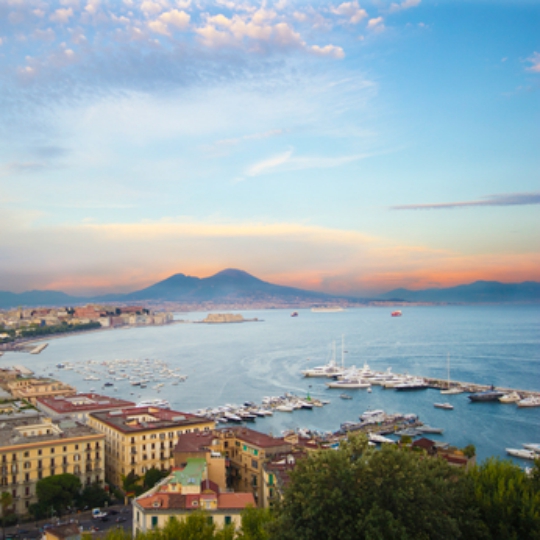 Is the pursuit of authenticity worth all the trouble? You bet. The reason is that to learn about the authenticity of Neapolitan craft traditions is to immerse yourself in the history of the city and the spirit of the Neapolitans themselves. In fact, I would argue that it’s one of the best ways to experience Naples from the inside out, ensuring that you’ll go home with memories–and hopefully a meaningful souvenir—to treasure for a lifetime.

The craft traditions of Naples are deeply embedded in the city’s history, many with roots in the ancient world. The ancient Greeks put their mark on the city’s urban fabric, and the Romans left behind an artistic legacy that encompassed works from life-sized sculpture to minute cameos. Makers of all types, from painters to sculptors, luthiers to cobblers, and makers of everything from hats to belts, keys, bracelets, goblets, rugs, lamps, spoons, shoes, and stockings had a role to play in Neapolitan society. By the Middle Ages, the neighborhoods of Naples pulsed with the lifeblood of these trades. The royal families who eventually made Naples their capital only served to bolster this thriving culture of artisanal expertise by patronizing makers of fine objects in wood, metal, ceramic, textiles, and other materials.

Historically, artisans were scattered across the city, with concentrations of tradespeople involved in the same or related trades. By the late Middle Ages, for example, goldsmiths clustered in the Antico Borgo degli Orefici, along the streets west of the Corso Umberto. Many other artisans occupied the narrow alleys of the bayside districts now known as the Centro Storico and the Quartieri Spagnoli.

Along the Amalfi Coast, the traditional crafts of lace, embroidery, intarsia, and paper developed over centuries. The coastal road on which cars and tour buses careen today was only built in the mid-1800s, and before that, people in these small villages remained isolated. The small towns clung to the cliffsides, and travelers reached them via boat or along footpaths that wound through the hills. Therefore, the craft traditions of the Amalfi Coast developed independently or only through knowledge gained through sea travel. Today, the majority of the high-quality makers of traditional wares still cluster in these small villages so picturesque and characteristic that they have been designated a UNESCO World Heritage Site. 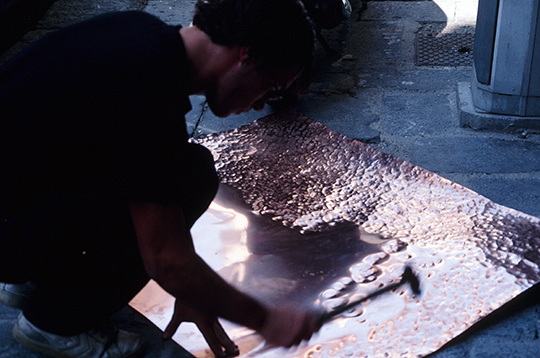 The Spirit of Napoli

Naples’s treasures are not the same as those in other Italian cities like Venice, Rome, and Florence. At first glance, many travelers see only crumbling façades, grimy alleyways, piles of neglected garbage, and graffiti. Although the city boasts a number of excellent museums, the truth is that many of its artistic glories are tucked away in monasteries, churches, and palaces so that they take a bit more work and careful attention to discover. The effort pays off when you find something truly extraordinary; even a slow stroll through the historic district of Naples reveals indescribable beauty, and occasionally wonderful surprises, in its nooks and crannies.

The ancient world has exerted a strong influence on Naples and its surrounding region. As early as the eighth century BCE the Greeks began to settle along the coasts of southern Italy. In this territory known as Magna Graecia, Naples, or Neapolis, held pride of place because of its situation on the beautiful and naturally protected Bay of Naples. The Romans expanded the city and built luxurious country estates on its outskirts. Today, the allure of the ancient world is still palpable, as artisans carve cameos like their ancient predecessors, ancient art fills the museums, and the incredible archeological sites of Pompeii and Herculaneum lie just beyond the city.

Over the centuries, the Church also exerted a powerful influence on the visual culture of Naples and its region. In this profoundly Catholic region, the Church’s presence can still be felt in countless street shrines, clergy walking the narrow alleys, and spic-and-span cemeteries festooned with fresh flowers and polished marble headstones. Artisan shops overflow with papier-mâché nativity scenes, multicolored rosaries in gold and silver, and wooden and plastic statues depicting the Madonna and saints both popular and obscure.

The Baroque period of the seventeenth and eighteenth centuries, however, made the most lasting and observable imprint on the city’s artisanal traditions. During that era, the art and architecture of Naples enjoyed a period of extraordinary flourishing as the city emerged as a leading royal city and center for the arts. For centuries already, Naples had stood at the epicenter of a convoluted European royal chess game. French and Spanish dynasties actively vied for the privilege of ruling the Kingdom of Naples, which comprised most of the southern Italian peninsula. Naples had been the capital of this strategically important territory since the thirteenth century, when the French King Charles of Anjou ceded Sicily to his Spanish rival, Peter III of Aragon, and established his seat in Naples. Over the course of the next four centuries, the kingdoms of Naples and Sicily flipped back and forth between French and Spanish monarchs, whose sovereignty was either won in battle or sealed by marriage. The Bourbon dynasty took control of the kingdoms of Naples and Sicily in 1734 under Charles, who traced his descent through the French Bourbon line, yet at the same time was the son of the Spanish king.

Under King Charles and his son, Ferdinand IV, the arts of Naples enjoyed an extraordinary Golden Age. The Bourbon kings’ contribution was to encourage and promote the local traditions of working with stone, coral, wood, shell, precious metals, and other materials with a distinctively Neapolitan accent. Focusing on local master artisans and traditions, the royal court brought to new heights those traditions that still endure today: Capodimonte porcelain, the carving of coral and cameos, inlaid wood and stone. Along with the visual arts, royal patronage helped Neapolitan music and theater make an indelible mark on the history of performing arts. 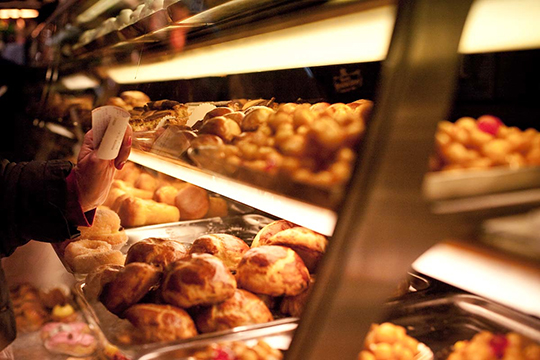 Many of the region’s most significant artistic traditions owe their prominence to royal patronage. Marriage and political alliances closely linked the royal families of Spain, Italy, and Austria during the Baroque era. The Neapolitan kings were keen to bolster their legitimacy and prestige among this group. Not to be outdone by their contemporaries, who founded royal factories churning out porcelain at Sèvres and Meissen; tapestries at Gobelins; ceramics in Madrid and elsewhere, the Neapolitan kings quickly set up shop: 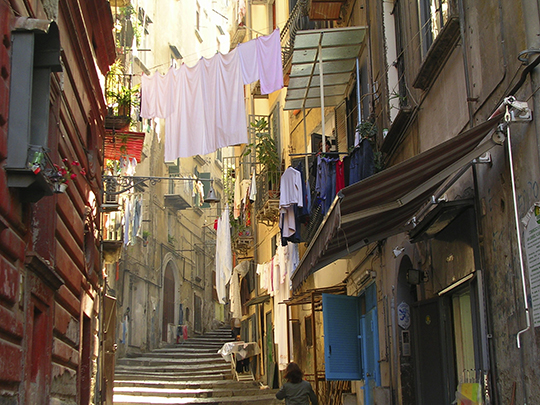 Lured by the reputation of Naples as a sophisticated royal city of art, international travelers flocked to the city. In the eighteenth century wealthy English travelers on the Grand Tour made Naples an obligatory stop, then continued on to the newly discovered archeological sites at nearby Pompeii and Herculaneum, incredible finds that had made headlines across the globe.

The Neapolitan version of the Baroque style developed a distinct character that seemed to sum up the city itself—dramatic, ornate, complex, sometimes lurid, often macabre. In the city’s Baroque artistic campaigns, paintings, sculpture, and architecture were always conceived as multimedia programs. A painting would have never been commissioned to hang on a stark wall and viewed as a singled-out work in the way most paintings are viewed in museums today. It would have been part of a larger multimedia ensemble. A commission for a bedchamber, for example, might encompass masters of not only architecture, painting, and sculpture, but also woodworking, gilding, metalworking, and other trades. Neapolitan artists worked collaboratively on often incredibly complex decorative programs.

After the Napoleonic conflicts ended the era of royal patronage in Naples and the modern period commenced, the distinctive Neapolitan spirit continued to pervade the city’s artistic traditions. Today in Naples, many of the trades of the past remain living traditions. The medieval guilds and royal factories may be long gone, but their arts, their techniques, and their soul still thrive in Naples. The skills, the forms, the knowledge, and more importantly, the spirit of the past, is kept alive in the hands of a small number of individuals who take pride in their city’s unique visual essence. Today, Naples retains the architectural and urban grandeur of a royal city, the beauty of its once grandiose patronage, and an enduring patrimony of artisanal production.