I once spent the month of August on Italy’s largest island and I can vouch for its scorching heat. There’s nothing like a cone overflowing with Sicilian gelato, among the richest and sweetest in Italy. But my favorite Sicilian treat is granita, a shaved ice beverage made with fruit juice—and sometimes coffee or sugar—to cool your engines. Granita comes in every flavor imaginable, from kiwi to espresso, mint and strawberry. Nothing refreshes better than granita on a hot summer day on Sicily.

But granita is much more than a frosty beverage; it’s a uniquely Sicilian ritual. The key is to carve out the time to sit at a table in a town square and consume your granita slowly, one tiny spoonful at a time. Pair it with a group of friends, a newspaper, or a leisurely afternoonspent people-watching against the backdrop ofSicily’s splendorous architecture, and you’ve availed yourself of one of the island’s most pleasurable, not-to-miss experiences.

It would be a mistake to speak of granita without placing it within the larger context of Sicilian desserts, which raise the concept of la dolce vita to a whole new level. Sicily is world-famous for its traditional pastries, candy, and frozen treats. Sweets are closely tied to local traditions and feasts, like the tiny lambs fashioned of almond paste that only appear around Easter time, orthe island’s famous tradition of Martorana fruits.

It’s also important to consider the centerpiece of Sicilian desserts: almonds. The island is one of the world’s top almond producers, and the characteristic flavor and aroma are synonymous with Sicilian cuisine and pastries. If you only try one flavor of granita on Sicily, make it almond.

But there’s much more to Sicily’s famous frozen treat; read on. 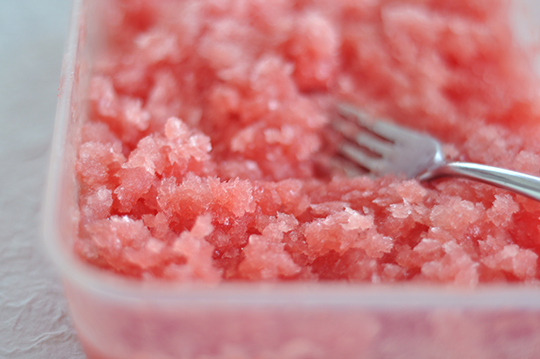 Once upon a time, Sicily was famous for… ice!

Across the mountain peaks of Etna, Iblei, Lauro, Nebrodi, and Peloritani, strange, conical stone structures have survived centuries. Many of these Sicilian snow huts, or neviere, have stood since the Middle Ages as storage spaces for snow and ice collected during the winter months, packed tightly in below-ground pits, and insulated with layers of stone, brick, and straw.

Historical documents from the fifteenth century onwards bear testament to business of Sicilian ice, which was exported from the island’s volcanic peaks to destinations as far away as Malta and the north African coast. When snow fell in the high elevations, a clanging bell would lure day laborers to climb the mountains to earn a few coins by carrying cartloads of snow into the neviere for safekeeping. In the summer, the ice would be transported down the mountains to consumers along the coast looking to mix the snow with fruit juice and syrups for a tasty refreshment.

Of course, the advent of electricity and ice-makers meant that by the twentieth century, granita became widespread not only on Sicily but across Italy. Today, granita with a fresh brioche is a traditional Sicilian breakfast. Many take their granita coffee-flavored, while others opt for an almond-flavored granita with a shot of espresso on the side. But across Sicily, locals and visitors enjoy granita not only at breakfast but throughout the day, paired with a meal or enjoyed as a mid-afternoon snack. 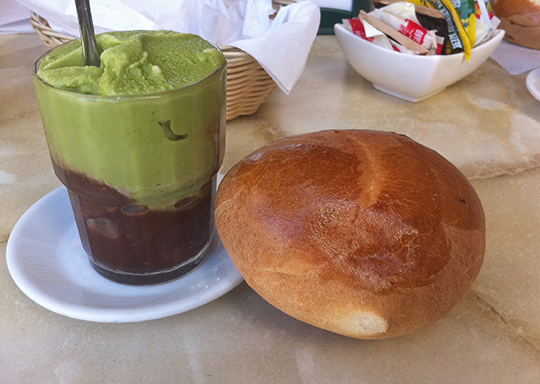 How granita is made

A Sicilian granita requires only ice paired with fruit juice, espresso, or nut milk. However, like many of Italy’s most important culinary traditions, the simplicity of the recipe can be deceiving, and there are as many varieties of granita as there are Sicilians. As in making a fine wheel of Parmigiano-Reggiano or a bottle of traditional balsamic vinegar, a well-madegranita results from high-quality ingredients and family recipes passed down over generations.

An impressive-looking mixer, the mantecatore al bastone, is the traditional machine for making granita. Its large mechanical beater is useful for whipping air into the mixture, making the resulting granita as light and fluffy as possible. Industrial soft-serve and “slushy” machines are also used. In some artisanal pastry shops, the ice is still today scraped by hand.

Here are some of the most popular granita varieties:

How to experience granita on Sicily

Granita is served in bars and pastry shops across the island, but granite are not created equally. Taste and quality can vary significantly from town to town, and from maker to maker. As you become a connoisseur of Sicilian granita, you will find small differences in consistency, flavor, and sweetness from town to town.Bars and confectioners in Messina and Catania brag that they have the best on the island, but the outlying islands off Sicily’s northern coast also have wonderful recipes.

You can also order granitaatmany bars and pastry shopsacross Italy, but sampling it onSicily offers the best opportunity to appreciate the tradition in its native setting.