BEST OF SICILY: Shopping for Ceramics in Caltagirone

BEST OF SICILY: Shopping for Ceramics in Caltagirone

The hilltop village of Caltagirone rises like a mirage above the parched landscape of central Sicily.Scrubby plants and olive treeseke out their existence in the sand-colored earth, along with the hardy residents of this town.When the heat reaches toward triple digits Fahrenheit on a typical summer afternoon, the dozens of Caltagirone’s artisans retreat beneath the awnings of their shops, quietly painting colorful designs on ceramic pots, waiting for the town to come alive again as the sun goes down.

Take one look at the landscape around Caltagirone, and you’ll understand why ceramics became the destiny of this hilltop town. For two millennia, the clay has meant a living for the people of Caltagirone. The word Caltagironeitself derives from the Arabic phrase Qal’at al Ghiran, or Rock of the Vases, which, according to legend, is the name its medieval inhabitants gave it.

Today, Caltagironeis the center of an uncomplicated, exuberant ceramics tradition. The designs are bold and brash, with a palette dominated by blues, greens and yellows and big, bold designs. This pottery exudes a sense of warmth and cheer that feel as if they could only exist on Sicily.

On Sicily, ceramic art is deeply rooted in time. The ancient Phoenicians and Greeks brought their artisanal traditions to the island, creating amphorae, kraters, kylixes, and other typical ancient wares using the ruddy earth and painted with styled black and red figures. The technique of laying bright, saturated colors against a white tin oxide background developed in the Middle Ages, and may have been introduced into Sicily during the Muslim conquest of the ninth through the eleventh centuries. These early artists left their masterpieces to bake in the hot Sicilian sun, and then left them behind, where they continue to inspire Sicily’s artisans today.

The term “maiolica” refers to earthenware painted with tin oxide glazing enamels before firing at a low temperature to reach a reflective, hard finish. On Sicily, you won’t find the refined Renaissance elegance so embodied by pieces from the ceramics towns of central Italy, such as Deruta and Faenza. Instead, you’ll find bold patterns, bright colors, and brash, splashy decorations that capture the vigorous Sicilian spirit.

Today, ceramics are made and sold all over Sicily. The towns of Santo Stefano di Camastra and Monreale, just outside Palermo, also boast important and distinct ceramics traditions of their own. But it’s in Caltagirone, with its famous seventeenth-centuryceramic staircase, the Scala di Santa Maria del Monte, that these colorfully decorated wares are most closely associated with the spirit of the place itself.

The distinctive Caltagirone style of ceramics is characterized by a white background and limited color palette, focused on bright blues, greens, and yellows. Today, most of the artisans crafting ceramics in Caltagirone reproduce pieces from the town’s heyday, the seventeenth and eighteenth centuries. Caltagirone is also known for large jars in the shape of human heads, popular in the nineteenth century. As you stroll the town’s narrow streets, crowned heads of queens and kings peer out at you from shop windows, along with traditional depictions of Moors, recalling Sicily’s history.

The most traditional forms include lidded pharmacy jars decorated with saints and nobles; ancient-looking amphorae; plates with vegetal motifs; tiles painted with fruit and animals; heads of queensand kings; and decorative forms like pinecones. More modern inventions include planters and lamps. 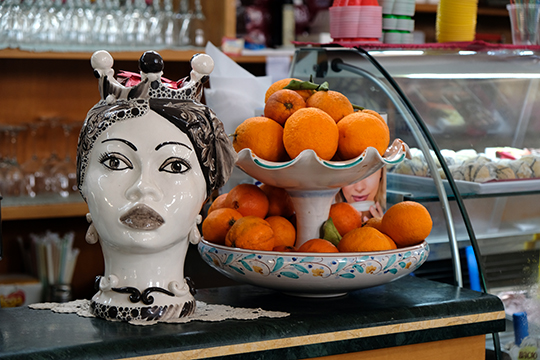 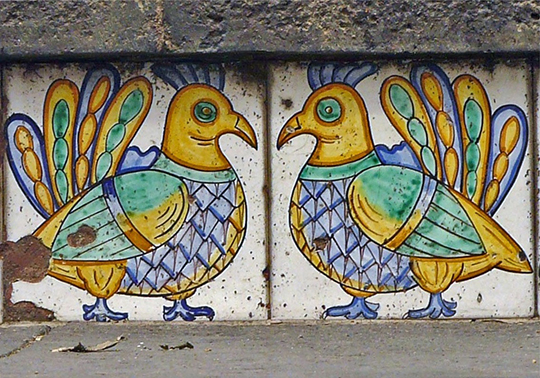 More than a hundred ceramic studios make their home in Caltagirone, and a ceramics shopping excursion can prove overwhelming. Here are a few tips to help you navigate the experience: 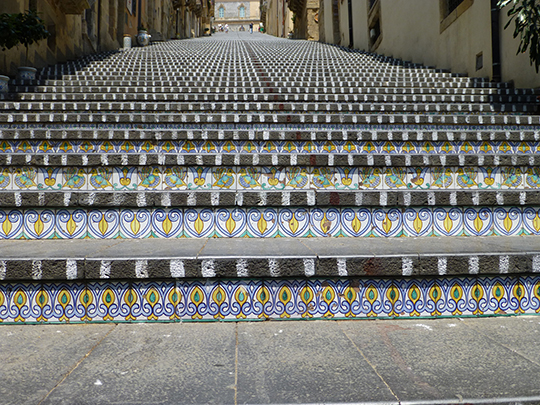 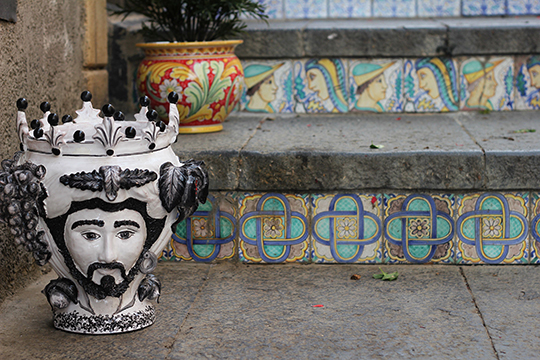 Don’t miss the famous Infiorata, when the grand ceramic staircase of Caltagirone is carpeted in an overflowing display of thousands of flowers.

End of July and mid-August

On balmy summer evenings, stroll the streets and enjoy a magical display of flickering candles during the festival of the Illuminata.