The famous tart-sweet liqueur known as limoncello requires only four ingredients: lemon peels, grain alcohol, sugar, and water. However, like many of Italy’s most important culinary traditions, the simplicity of the recipe can be deceiving.

As in making a good risotto, a fine wheel of Parmigiano-Reggiano, or a bottle of traditional balsamic vinegar, good limoncello results from quality ingredients, generations of knowledge, small but critical tweaks in the recipe, and well-kept family secrets passed down over generations.

Today, the lemons of Capri and the Amalfi Coast are considered extra-special. The trees clinging to the cliffsides hang heavy with fruit, sending a heady scent into the air. One of my favorite walks is along the meandering paths of this coastline, lined with lemon trees trained into arbors that provide refuge from the sun.

These lemons are the star of not only the region’s famous limoncello, but also an array of pastries sold in the wonderful pasticceriein the towns. These include lemon tarts; shaved ice or granita made with lemon; delizia, a dome-shaped cake with lemon-flavored whipped cream; and lemon gelato or sorbet. You can find lemon candies and chocolates filled with limoncello cream. You can even buy soap, face cream, lotions, and other potions made from lemon.

Where did limoncello come from?

Roman fresco painters depicted large citrus fruits on the walls of luxurious villas at Pompeii and Herculaneum, and surely lemons must have been cultivated for many centuries before the first documentary evidence of lemons along the Amalfi Coast,dating to the Renaissance.

According to some historians, lemon liqueur was first made behind the walls of convents and monasteries, where excellent-quality beer and wine was already a mainstay, and where strong alcoholic elixirs were commonly concocted in monastic infirmaries for medicinal purposes. In fact, limoncello may have derived from a group of liqueurs called rosoli, sweet alcoholic drinks comprised of fruits, spices, herbs, and medicinal plants.

Beyond the convent walls, making lemon liqueur became a family affair. Residents of the Amalfi Coast probably have been sharing bottles of lemon liqueur among family and friends for centuries. Recipes began appearing in regional cookbooks around 1900.

In 1988, a businessman from Capri named Massimo Canale registered the first trademark with the word “limoncello,” using a recipe handed down from his great-great-grandmother and commercializing the drink outside of the region. It was an idea—and a product—that would prove wildly successful, as limoncello has transcended not only the region but all of Italy to be considered an international and world-class tradition. 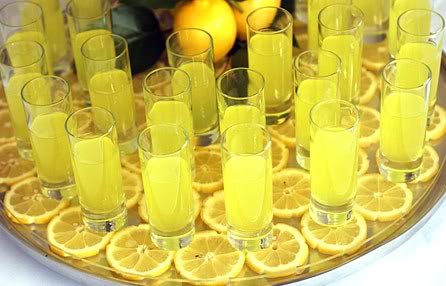 There are several types of lemons grown along the Amalfi Coast. Most are citrons, or grapefruit-sized lemons. Their peels are thick, their insides pulpy and fragrant. The lemons are prized for their large size, oily peels, and intense lemon flavor, all particularities of the environment of rich volcanic soil, salt air, abundant sunshine, and craggy limestone cliffs in which they are cultivated. Here are the two most famous varieties:

Both types of lemons are regulated by a local limoncello consortium. Officials inspect the cultivation, harvesting, production, and labeling of both types of lemons, seeking to protect and promote these local products and their makers. 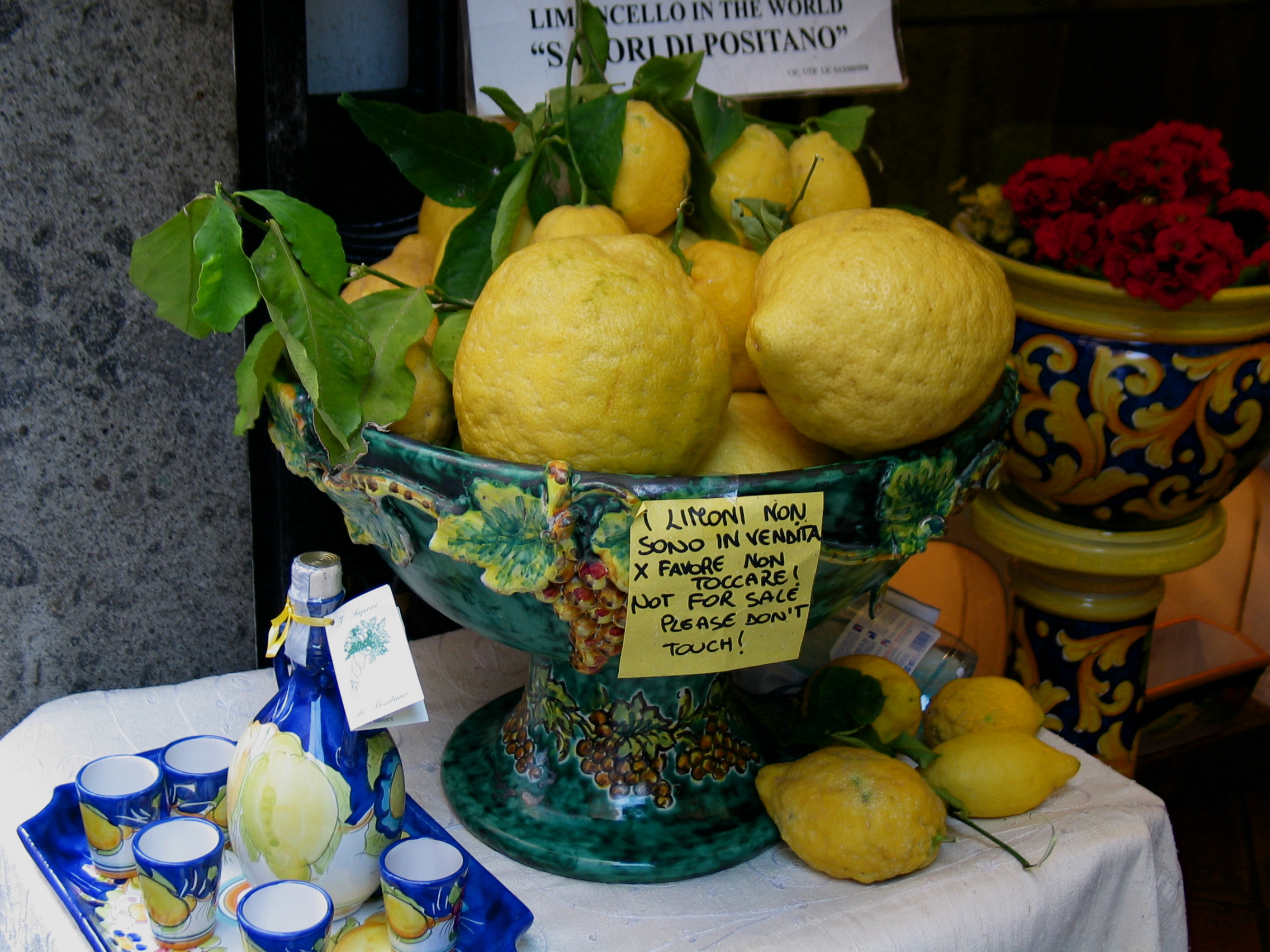 How Limoncello is Made

Italy is one of the world’s largest producers of lemons, and the Amalfi Coast stands at the heart of this agricultural industry. Most lemons used in limoncello production are cultivated by training the trees to climb along a framework made of poles about twelve feet high, forming an arbor. The lemons ripen between February and October, then are hand-plucked based on their size, color, and shape.

From lemon to limoncello, approximately eighty days elapse. It’s a relatively simple process but each producer boasts his or her own limoncello secrets. For example, some use only the rinds, while others marinate the pulp and seeds. People experiment with different ratios of sugar to water in the syrup. The location where the limoncello steeps, with varying temperature and relative humidity, can also play a role. Ultimately, these factors affect the flavor as well as the opacity and texture of the final product. One batch of the final product may be bright, neon yellow; another may be more cloudy and opaque as a result of the emulsification of the sugar and lemon oils. 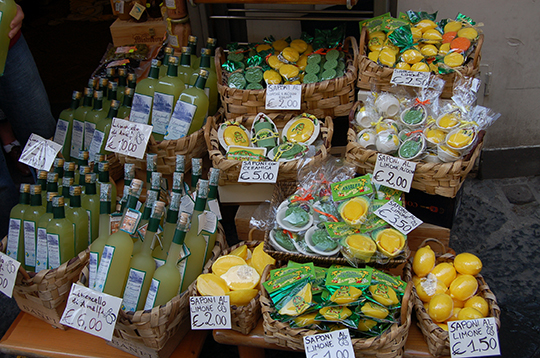 How to Experience Limoncello on the Amalfi Coast

Across southern Italy, restaurateurs serve limoncello after dinner in chilled glasses, frequently offered at no charge.You can also order limoncello at virtually any restaurant or bar in Italy, but visiting the Amalfi Coast offers a wonderful opportunity to appreciate the cultivation of lemons as well as the production of limoncello and other lemon-based products. Here are a few ways to experience it:

Start with the consortia.

In Italy, certain prized agricultural products are strictly regulated. Lemons grown in certain designated regions of Capri and the Sorrentine peninsula fall under the legal protection afforded by an I.G.P. (IndicazioneGeograficaProtetta), a protected geographic area. Two consortiaprotect the two main lemons cultivated there based on their cultural, historical, and culinary importance. These certified areas are protected under laws of the European Union.

Much like the consortium of Amalfi lemons, this consortium regulates the cultivation of Sorrento lemons. For a current list of regional producers of limoncello using these specially designated lemons in their liqueur, check the consortium’s website.

Visit one of the larger producers.

On your own or with a group, you can visit some of the lemon groves where the ovale di Sorrento and the sfusato amalfitano are cultivated. Larger, more industrial-scale producers of limoncello are scattered across the region. These producers employ many people and use specialized machinery to peel the lemons, concoct the recipe, and bottle, cork, and label their products. The assembly-line production process is fun to observe.

Family-based artisanal enterprises, some consisting of several generations, also bottle and sell their own varieties. Many individuals also make homemade versions. Gourmet and gift shops in Naples, Sorrento, Amalfi, and the outlying islands of Procida, Ischia, and Capri are chock-full of limoncello bottles. When you stroll the lanes of the Amalfi Coast, you will see bottles in a variety of shapes, from tall cylinders to squat balloons to those resembling flasks, all boasting the best quality or secret recipe.