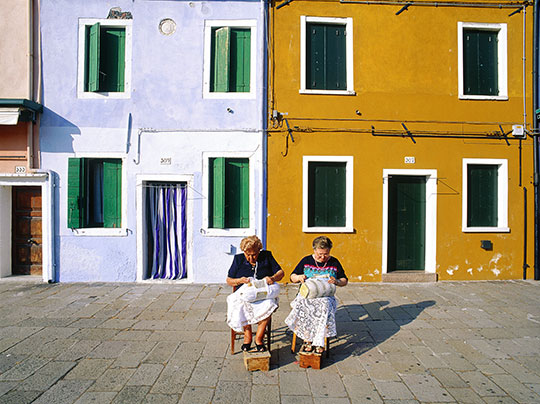 In 1880, twenty-four of the thirty inpatients at the women-only San Clemente “lunatic asylum” in Venice were listed on the books as lacemakers. Whether a coincidence or a measure of the long-lasting effects of such tedious work, one thing is certain: creating traditional Venetian lace is one of the most painstaking endeavors in the history of art.

The Origins of Venetian Lace

The origins of Venetian lace are lost to history. According to legend, a love-struck sailor gave a Venetian girl an aquatic plant called trina delle sirene—mermaid’s lace. The girl was so taken with it that she immortalized its beautiful form with fine threads, and the art of lacemaking was born. Over several centuries, Venetian lacemakers produced wonders of breathtaking intricacy, extremely fine pieces stitched together with gossamer-fine threads. For three hundred years their work boasted the most prestigious lace pedigree in Italy, if not in the world.

The earliest Venetian laces were produced inside convents and were reserved for church vestments, altar cloths, and other delicate church finery. Trade guilds also began to craft lace in the fifteenth and sixteenth centuries, although in Venice—as in other important lace cities in northern France and Flanders—the convents continued to be prolific centers of lace production. Because lace was considered a proper task for a woman, especially one dedicated to contemplative life, many cloistered women spent most of their daylight hours—indeed most of their lives—with a needle and thread. Lacemaking also became the province of the various scuole, or Venetian civic organizations, which, among other charitable activities, organized work for victims of circumstance, including spinsters, orphans, and others who could not find a clear place within the strict social roles of Venetian society.

The heyday of Burano needle lace ranged from about 1620 to 1710, the height of demand among European nobility and royalty. Venetian lace became known as punto in aria or “points in the air” because of its delicate effects. At that time, fashion called for lace collars and cuffs, as well as handkerchiefs and other accessories for both men and women. A type of lace collar that spread out in a fan behind a woman’s head became popular in Venice itself.

Burano lace gained such fame that it became a status symbol for European nobles. Portraits of nobles wearing outlandishly fancy lace collars—the kinds you see in the seventeenth-century paintings of Rembrandt and van Dyck—helped make Venetian lace a status symbol among aristocracy from Ghent to Paris. European nobles wore their Venetian lace finery to sit for portraits that would be handed down to future generations. Painters were challenged to capture the web-like intricacies of lace in paint, portraying their sitters’ collars, cuffs, shawls, veils, and gloves.

Venetian lace is well documented among the most prized possessions of European nobles. In the 1600s, an inventory of the wardrobe of Elizabeth I of England included lace of “Venice sylver” and “Venys gold,” a testament to the practice of weaving braids of precious metals into lace patterns for costly fine garments. Punto in aria is also well documented throughout the Renaissance as part of women’s dowry inventories, a testament to its enduring value.

In order to supply the increasing demand for Venetian lace, cloth merchants moved lace production to the outlying lagoon islands in order to employ lacemakers at low cost. Soon, lace produced on the island of Burano became the most highly coveted lace in Europe. The women began working in almost an assembly-line fashion, churning out trimmings and finery to supply the clothiers’ guild. Although the lacemakers themselves never became wealthy, those involved in the international trade of lace and textiles could soon afford to occupy the finest palaces of Venice.

Catherine de Medici, an Italian noblewoman who became Queen of France, brought Burano lace designers to the French court in the mid-1500s, and punto in aria remained popular in France for another two centuries. King Louis XIV looked to Venetian artists rather than French ones when it came time for his coronation in 1654. For the event, he wore a fine lace collar that took lacemakers Lucretia and Vittoria Torre from the hospice of the Zitelle on Giudecca some two years to produce. The commission created renewed demand among French patrons, and in 1665, Jean-Baptiste Colbert, the French Minister of Finance, brought a group of Venetian lacemakers to train women in the French lacemaking centers of Reims and Alençon.

The End of an Era

Eventually, the rise of French and Flemish centers of production signaled the end of an era for Burano lace. By the end of the seventeenth century, stiff competition with these northern rivals caused the Venetian lace industry to decline, even though Burano lacemakers attempted to evolve along with fashions. French needle lace, point de France, rose in popularity, and Venetian lacemakers began to borrow French motifs. When collars made with Flemish bobbin lace became all the rage in the eighteenth century, Venetian lacemakers emulated it with the needle and thread, resulting in a new type of lace that came to be known as punto Burano.

As Venetian lace began to fall from favor, there were attempts to found a lacemaking school on Burano to revive what was already seen as a waning tradition. However, by the end of the eighteenth century, in the wake of the French and American Revolutions, people no longer wanted to wear fashions that were associated with the reviled aristocracy.

On Burano, however, lacemaking never truly died, as mothers continued to pass on the tradition and the skill to their daughters and granddaughters. The art of Venetian lacemaking ceased large-scale production and returned to its origins as a private, domestic occupation. Many women turned to bobbin lace, a faster and therefore more economical technique for turning out edgings for table linens and other accessories.

Venetian lace enjoyed a revival toward the end of the 1800s, thanks in part to the politician Paolo Fambri, who gathered the right group of people and resources to bolster Burano’s sagging economy and bring the tradition of lace to life again. A small group of supporters rallied around a vision to revive the tradition of Venetian needle lace, as well as other bobbin lace traditions once practiced widely in the Veneto region, particularly in Pellestrina and Chioggia. At that time, a single elderly, illiterate woman named Cencia Scarpariola remembered how to execute the centuries-old punto in aria di Burano stitch, which she passed on to several other women.

Burano Lace in the Modern World

In 1872, the Scuola di Merletti, or lace school, opened thanks to the patronage of Countess Adriana Marcello, Princess Margherita of Savoy, and several other noblewomen who agreed to purchase the work produced by the school. Fambri also brought together several companies to begin producing and selling traditional lace. One of these companies belonged to a Venetian entrepreneur named Michelangelo Jesurum. Mr. Jesurum opened a lacemaking factory, which helped to pass the torch of tradition. In 1939, the business was sold to the Levi Morenos family, who continues to operate the enterprise under the name Jesurum today.

Many of the women you see on Burano today making lace in the squares and on the sidewalks learned the craft from childhood, either from their mothers or grandmothers, or from the old lacemaking school. The craft continues thanks to today’s lively Venetian tourist trade, which still supplies buyers for this longstanding art form.

Have you discovered the colorful island of Burano? Drop a comment below. I love to hear your stories!