Faenza, located in the heart of Emilia-Romagna halfway between Bologna and the Adriatic Sea, is one of Italy’s most important centers of ceramic heritage. In fact, the term faience is just a Frenchified version of Faenza, bearing witness to the importance of the town’s ceramic history. Today, Faenza’s quiet streets and idyllic squares give little witness to the powerful influence this market town once wielded. Instead, it offers a delightful, off-the-beaten-track diversion for fans of authentic Italy and ceramic tradition.

What exactly is maiolica?

Maiolica refers to the technique of painting with ceramic pigments against a white glaze background over terra-cotta. Making maiolica involves layering colored pigments on top of a white glaze achieved with tin oxide. When fired in a kiln, this technique imparts brightly colored, shiny colors that pop from a creamy, opaque background. This bold contrast of color against the white, along with characteristic stylistic conventions based on a visual vocabulary of the Italian Renaissance, first propelled this type of ceramic ware to fame and keeps it popular even by today’s standards of taste. 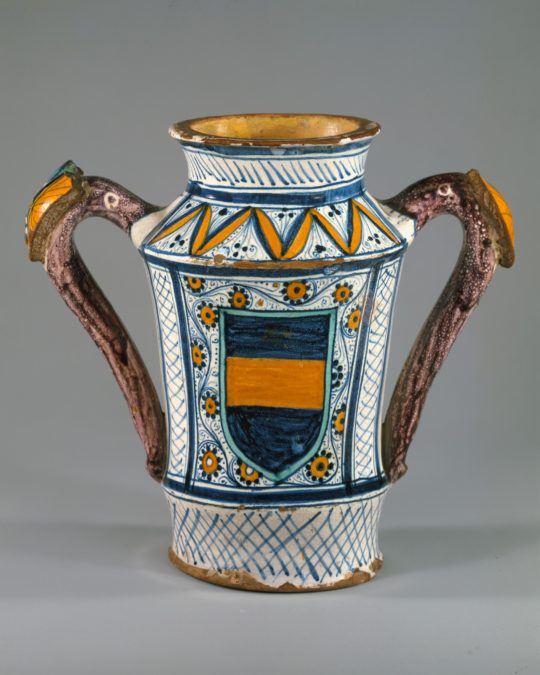 In Faenza, the maiolica tradition began during the Middle Ages. By the 1500s, Faenza was famous for its annual weeklong fiera, which drew merchants and crowds from across Europe to trade everything from sheep to the region’s famous cheeses and cured ham. By that time, ceramicists in Faenza were already major producers and exporters of colorful ceramic wares.

Maiolica was popular with the noble classes for decorating fine homes throughout Italy during the Renaissance and Baroque periods. Pieces of maiolica were exchanged between acquaintances, and special pieces were commissioned to mark engagements, important political or business alliances between families, and other special occasions. Wealthy patrons tasked ceramics masters with creating “his-and-hers” plates depicting the elegant profiles of a bride and groom. They covered their tables with brightly painted wares depicting themes of hunting, mythology, and heraldry.

Faenza became known for its “beautiful lady” plates, popular in the Renaissance as engagement and marriage gifts. Alongside a profile of a lovely female, the name of the lady—Bella Giulia for example—would be paint­ed on a scroll. Today’s Faenza’s artisans make lovely reproductions of these beautiful lady plates, along with many other works— bells shaped like women with long dresses, small plates, pharmacy jars, eggs, Christmas ornaments, oil and vinegar jars, and many other small treasures. 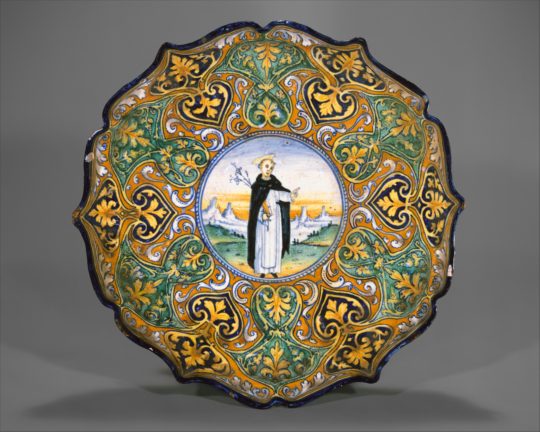 There’s no single style of Faenza ceramics, but today artisans who follow historical tra­dition take their inspiration from one or more of the main ceramic periods of Faenza: 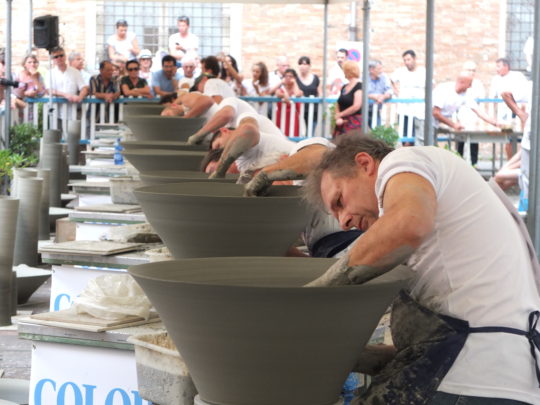 Today Faenza is home to several dozen working ceramics firms whose artisans quietly turn out small master­pieces. Quality and price vary tremendously in Faenza, but in general, you can find good values on ceramics given that the town is off the beaten tourist track. You can purchase a high-quality, authentic work directly from one of Faenza’s ceramic masters for less than a hundred Euro. These pieces hold their value over time; authentic works produced in Faenza between 1500 and 1530 often command six figures at auction.

In recent years the Italian Association of Ceramic Cities (the Associazione Italiana Città Ceramiche, or AICC) has invented trademarks to designate ceramics that adhere to certain historical standards, much as the term D.O.C. is given to wines that follow standards for a particular region. In Faenza, this “ceramic D.O.C.” is a trademark with an image of a handshake, one of the traditional decorative motifs of Faenza ceramics. Look for it prominently displayed at the entrance to the town’s ceramic merchants that have earned this designation.

If you want to shop Faenza like the locals, rent or borrow a bicycle; it’s the way most people get around this small, flat town. Start with the ceramics museum—one of the best in Italy—to get an overview of Faenza’s impressive heritage of working clay.

La Nott de Bisò
First Saturday in January
Roughly translated from the local dialect as “wine night,” this rowdy event culminates in the liberal pouring of local wines from pitchers made of Faenza ceramics.

Read more about Faenza ceramics in my guide, Made in Italy.