Etruscan Art in Italy: Not-to-Miss Collections to Put on Your Itinerary

Etruscan Art in Italy: Not-to-Miss Collections to Put on Your Itinerary

Etruscan art is having a moment. While most visitors to Italy are already familiar with sites and collections from the Roman era, many are beginning to discover the fascinating culture of the ancient Etruscans. This distinct civilization occupied central Italy between about the seventh and the first centuries before Christ. There is something about this fun-loving, vibrant ancient culture that feels alive today for those who take the time to seek it. 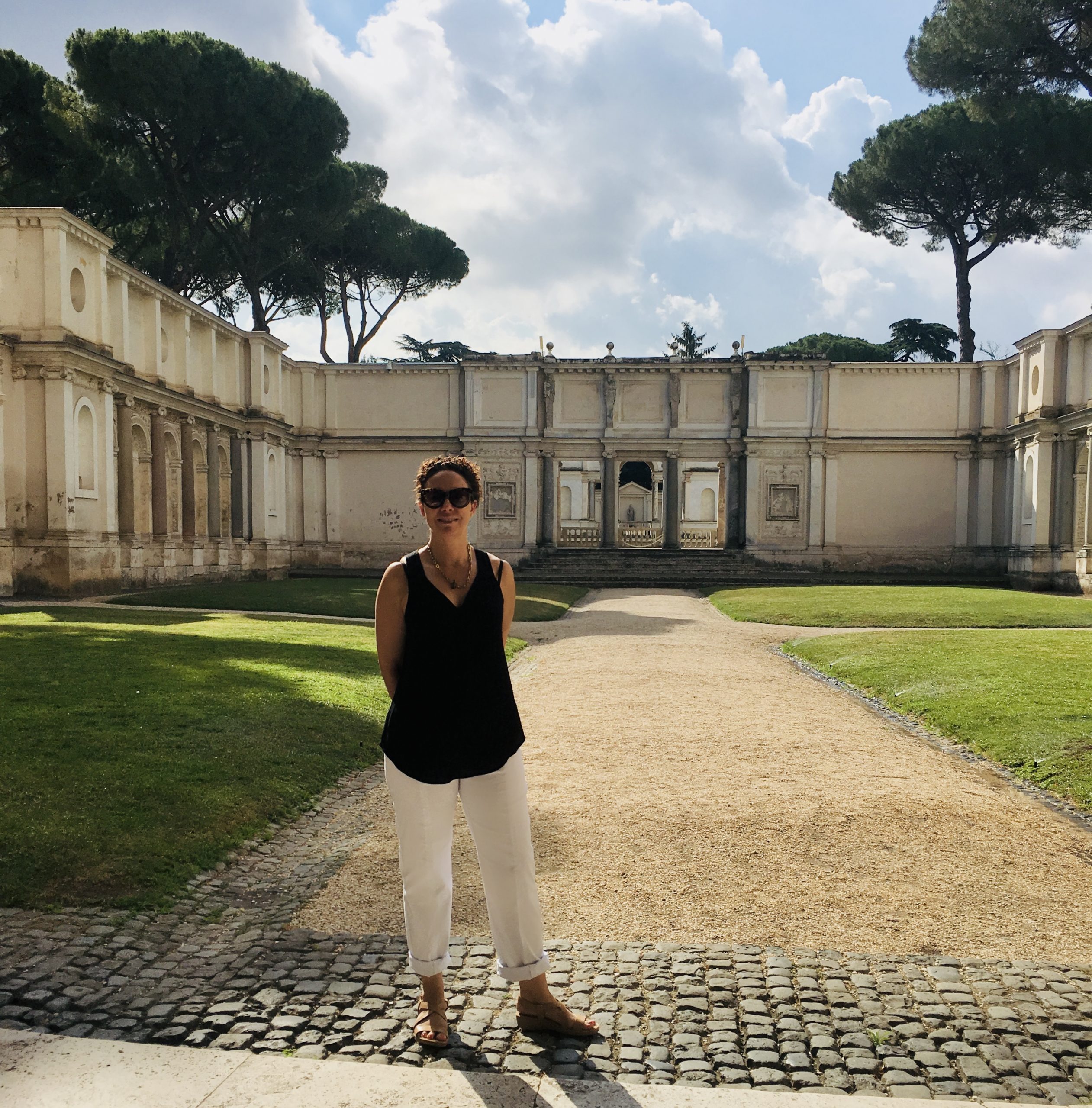 The National Etruscan Museum at Villa Giulia in Rome is one of my favorites!

Across central Italy lie hundreds of national, regional, and local museums that, in one short visit, can transport you to the world of the ancient Etruscans. More famous destinations like the Uffizi and the Sistine Chapel are bursting with visitors, but collections containing Etruscan treasures remain oases of peace. On a recent visit to the National Etruscan Museum in Rome at the height of the tourist season, my kids and I arrived at opening time and had the entire museum to ourselves for nearly an hour. What a treat!

If you want the pleasure of immersing yourself in the world of ancient Italy, put at least one of these destinations on your itinerary: 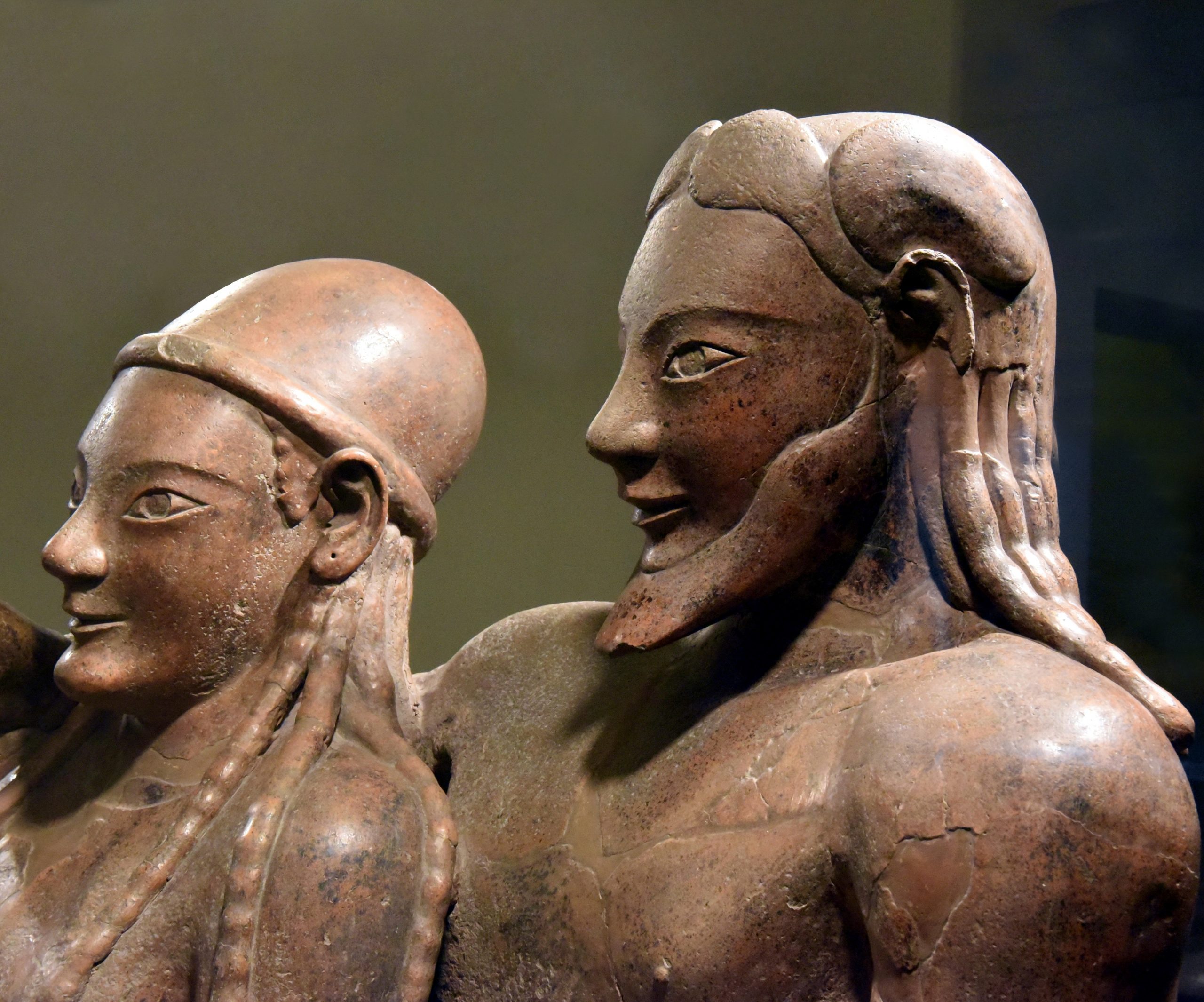 Along with the Etruscan collection of the Vatican (below), the Villa Giulia holds some of the most important masterpieces of Etruscan art, including the famous terracotta Sarcophagus of the Spouses, the Apollo from Veii, the FicoroniCista, the TitaVendia vase, and the Centaur of Vulci, among many other specimens of pottery, painting, bronzes, and other works. This must be one of my favorite museums in all of Italy—and that’s saying a lot!

This amazing sarcophagus, the so-called the “Sarcophagus of the Spouses” (sarcofago degli sposi) was discovered during the course of archaeological excavations in 1881 at the Banditaccia necropolis, outside of Cerveteri. The Etruscan Museum at the Villa Giulia in Rome purchased the sarcophagus, which at that time consisted of some 400 fragments which had to be pieced back together! This work stands as a symbol for the festive, fun-loving spirit of the Etruscan culture of the sixth century BCE.

Aplu (Apollo of Veii) and related sculptures, from the roof of the Portonaccio Temple, Veii, c. 510-500 BCE

This life-sized terracotta sculpture was part of the roof decoration of the Temple of Apollo in the sanctuary at Veii. The figure is what is known as an acroterion, an ornament placed on a flat base, often used in Etruscan roof decoration. This statue formed a sculptural group that included Apollo’s mother (the goddess Leto) and Hercules. Museum curators have set up the sculptures to give us an idea of how they might have been arranged on that temple rooftop. 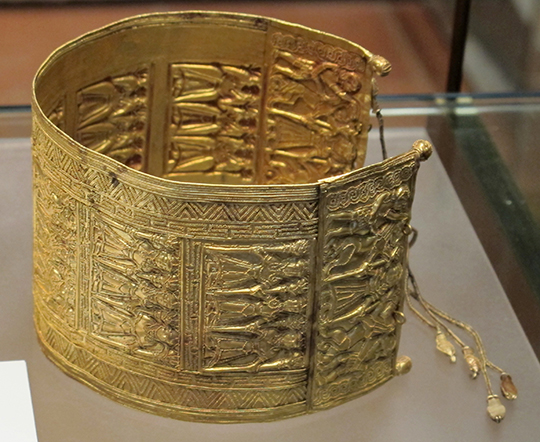 Etruscan Collection of the Vatican Museums

Many people miss this museum as they are being pushed along in the sea of visitors headed toward the Sistine Chapel. Take a detour into the Museo Gregoriano, and immerse yourself in the world of the Etruscans. Several galleries are dedicated to masterpieces of Etruscan art, including the Mars of Todi and the spectacular finds from the Regolini-Galassi Tomb from Cerveteri.

This striking warrior, discovered near the town of Todi in 1835, would have worn a helmet and carried a lance in one hand. In the other, he probably carried a patera or libation bowl, probably as a ritual performed before going into battle. An inscription on the skirt below the breastplate is written using Etruscan characters, but in the Umbrian language. The inscription tells us that a man called Ahal Truitis—a name that is Celtic in origin—dedicated this sculpture. So, we have an Etruscan object in an Umbrian sanctuary, dedicated by a Celt, giving us a fascinating glimpse into the rich cultural exchanges of the ancient Mediterranean. Some historians believe that this sculpture was ritually buried in a trench outside of Todi after being struck by lightning. As you might imagine, being struck by lightning was a portentous sign for ancient people. No doubt the ritual burial accounted for this particular sculpture’s survival.

Cache from the Regolini-Galassi tomb

This breathtaking work of gold was discovered at the so-called Sorbo necropolis just outside of Cerveteri, north of Rome. When the tomb was discovered in 1836, they found a female skeleton covered in gold jewelry. Across her chest, she wore a gold pectoral decorated with hundreds of tiny animals and plants, a symbol of her high status. She wore a belt with a spectacular gold fibula made with repoussé and granulation techniques. She wore two wide gold bracelets decorated with trios of dancing females with long hair and long dresses. She also wore necklaces with beads and amber pendants, gold earrings, rings, and pins. At her feet, the name LARTHIA was inscribed on each piece an 11-piece silver set at her feet.We don’t know whether Larthia was an aristocrat, a queen, or a priestess, but clearly, she was a woman of high status. 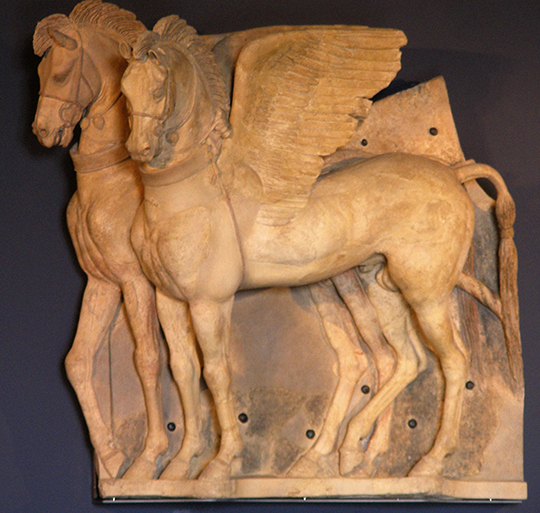 This archeological museum, housed in a medieval palace, is dedicated primarily to Etruscan civilization and contains many works excavated from the necropolis of Monterozzi located to the east of the city. One of its most impressive holdings are the winged horses that once decorated the pediment of the Ara della Regina temple.

Unfortunately, no standing architecture from the Etruscan period survives above ground. The Romans tended to preserve the location of major sites like temples, public squares, and homes, and they simply built over these original Etruscan structures. However, many Etruscan collections preserve roof tiles, architectural fragments, and decorative sculpture. Among the most impressive of these is a pair of winged horses that once decorated a major temple in the town of Tarquinia. They are now mounted high on the wall inside the town’s archeological museum to give visitors an idea of how they would have been seen from below.

These two excellent collections lie just a stone’s throw from one another and together, they represent an unparalleled dive into the world of the Etruscans. The archeological museum displays a wide range of Etruscan objects from cinerary urns to sarcophagi, pottery, gold jewelry, works in bronze and other metals. If you want a spine-tingling experience, don’t miss the underground civic museum, which occupies the seemingly endless network of tunnels that once supplied Chiusi with water. This “underground city” consists of subterranean passages, caves, and a large cistern. A guided tour takes you along rows of Etruscan sarcophagi, carved tablets, pottery, and other items from Chiusi’s archeological record.

Texts in the Etruscan Language

In addition to Etruscan sarcophagi arranged as they were originally placed in tombs, Chiusi’s museums contain many examples of Etruscan writing that you can examine up close. Etruscan is a non-Indo-European language that remains unique in the world. Scholars have scoured the tens of thousands of Etruscan texts that exist today, most of which come from a funerary context. 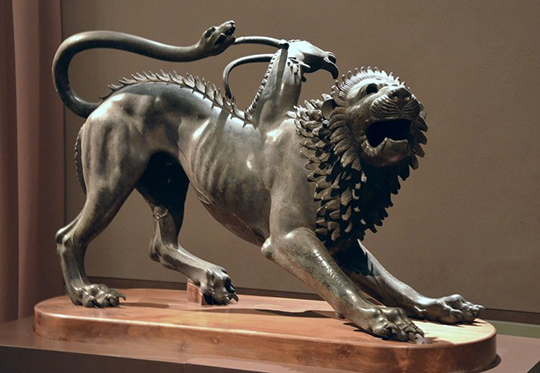 This collection is the prime repository of Etruscan goods discovered within the boundaries of Tuscany. The museum holds the famous Chimera of Arezzo, the life-sized Etruscan bronze statues of Minerva and the Orator (L’Arringatore), as well as many other important works from ancient Egypt, Greece, and Rome.

This famous bronze was found in 1553, at the height of the Italian Renaissance, when people were captivated by works of antiquity. Cosimo I de Medici, Grand Duke of Tuscany, took the chimera into his personal collection in Florence, where it was carefully studied and celebrated. The chimera was a fire-breathing monster from Greek mythology who caused all kinds of trouble for the people of Lycia in Asia Minor; that is, until Bellerophon, a hero from the Greek city of Corinth, mounted his winged horse Pegasus and slayed the chimera. The chimera itself is usually represented as a hybrid creature with the head of a lion, a snake-like tail, and a goat emerging from the middle of its back. The Etruscan artist who made the chimera of Arezzo managed to make this fearsome creature beautiful and powerful in its writhing contortions. No doubt this sculpture was meant to be viewed in the round. An Etruscan inscription on the right foreleg indicates that this beast was meant as an offering to the sky god Tinia. 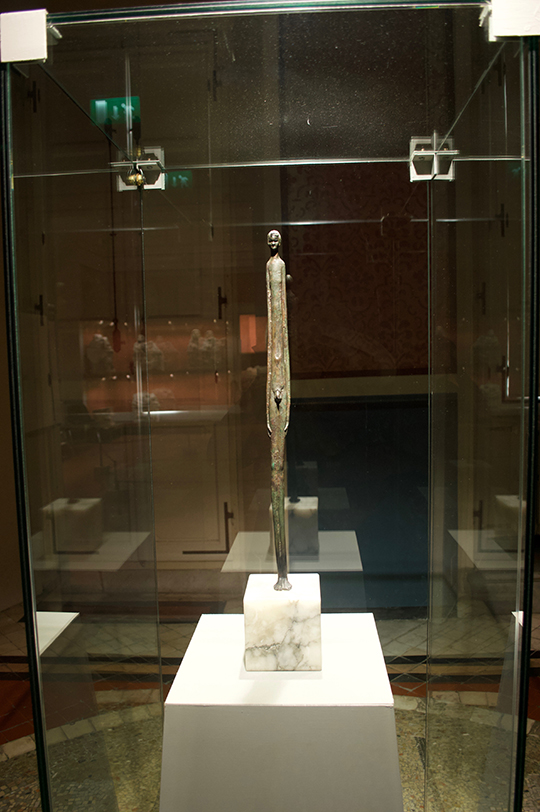 Volterra is one of my favorite destinations of central Italy, and it is an important place for the Etruscans. This museum contains a vast assortment of Etruscan funerary urns and characteristic vases made in Volterra during Etruscan times. There are also many examples of alabaster wares made with the translucent material mined near Volterra and still worked today.

This elongated standing nude, nicknamed “Shadow of the Evening,” is displayed in its own glass case inside the museum at Volterra. Small bronzes in human form are found across Etruria, and were probably used as votive objects. This one is unique for its large size, as well as its resemblance to modern works of art, especially those by the Italian sculptor Alberto Giacometti. 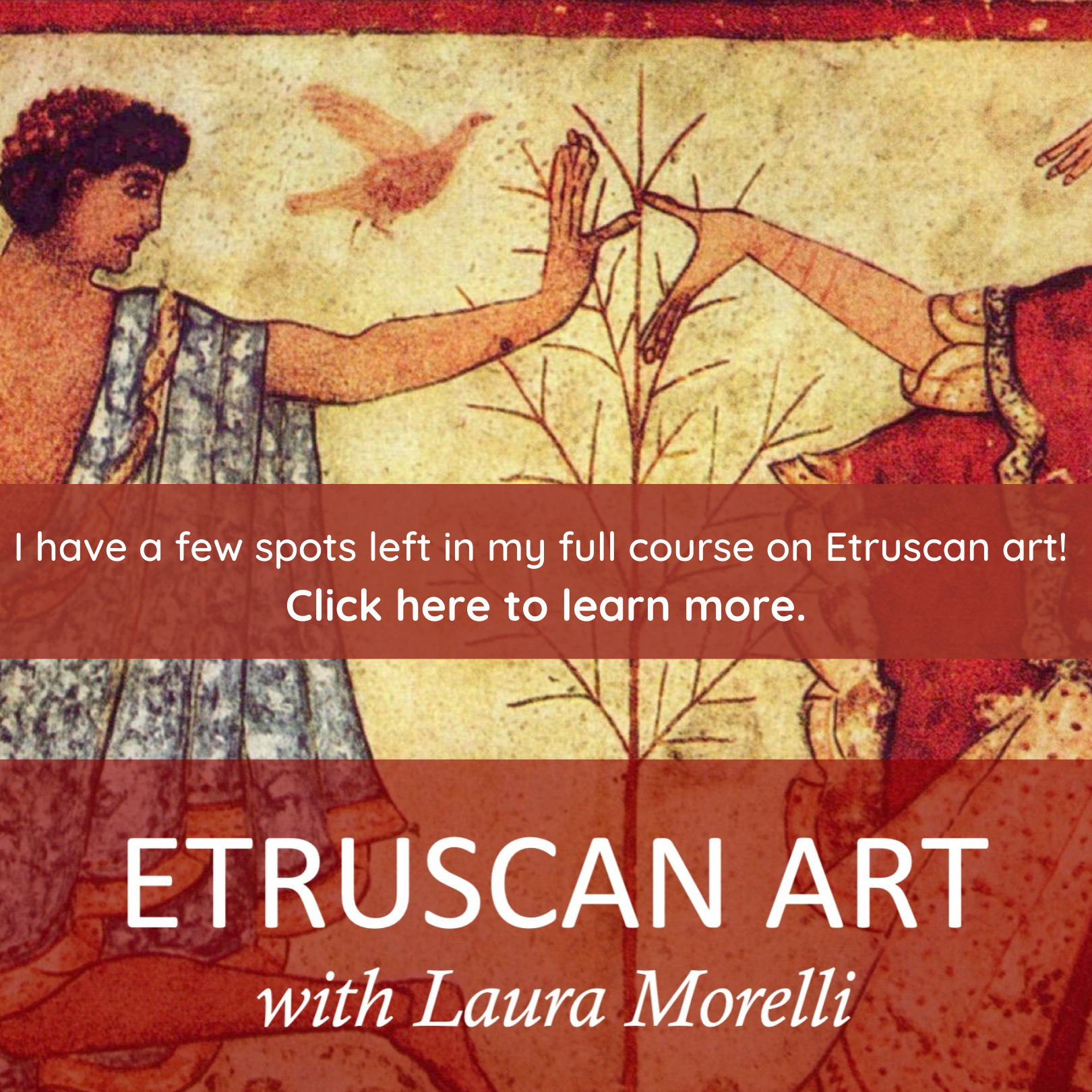