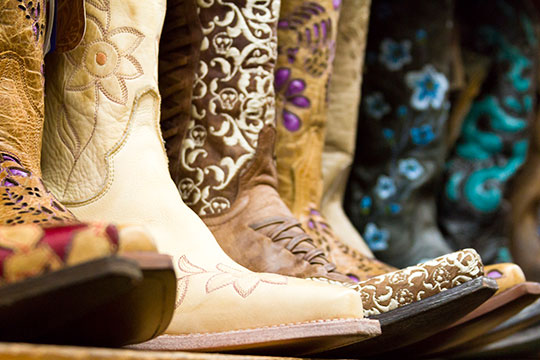 This must be West Texas’s most refreshing surprise—a plethora of artisan bootmakers who still make cowboy footwear by hand. Few are on the beaten path, and their shops are not fancy, but from them emerge cowboy boots that can be considered not just indelible icons of American style, but true works of art.

Behind today’s American cowboy boot are thousands of years of equestrian footwear. From ancient Asian mounted warriors to medieval European nobles, as long as horses have been domesticated, riders have wrapped their feet and legs in animal hides to protect them. The Mexican vaquero tradition helped shape the development of the boot that 19th-century Anglo cowboys wore while herding the cattle across the central and western states. Initially, function was more important than form. Early American cowboys wore flat- or low-heeled, round-toed boots, sometimes recycled from Civil War uniforms. Later, they enlisted shoemakers to help craft a particular weather-, thorn-, and snake-proof boot, with a higher heel to help secure their feet in the stirrups. By the 1870s, the basic form of the cowboy boot we know today had evolved.

Bootmakers established workshops across Texas and the western states. By the 1920s individual craftsmen had made names for themselves based on particular embellishments like hand-tooling, embroidery, inlays, exotic skins, and bright colors. By the time Western movies hit the silver screen in the 1930s, cowboy boots were already popular, but Hollywood’s romanticized depictions of the American West helped make the cowboy boot standard fare, not just for cowherds but for everyone. In the 1980s, rock bands sent the old cowboy boot to new heights of fame. Today, handmade cowboy boots remain popular with Hollywood and Nashville stars, many of whom boast impressive personal collections.

As in the past, today’s artisanal bootmaker begins with cured animal hides, mostly commonly calfskin. Avid boot collectors appreciate rarer specialty hides like goat, armadillo, ostrich, shark, eel, boar, even bullfrog. Alligator hides command the highest prices because of their limited supply and the challenges of working the material. Other exotic hides, like elephant, were once coveted but are now banned from the hide market.

Today bootmaking is divided between handmade and mass production. Even some of the large-scale commercial boot factories employ specialized craftspeople who complete certain steps by hand. Many factories, some founded a century ago, operate today, including Justin, Lucchese, Nocona, and Tony Lama, carrying on venerable traditions of quality bootmaking. In addition, several hundred custom bootmakers are scattered across the west, many in West Texas. Some of the more well-known include Rocketbuster, Little’s, Paul Bond, Stallion, and Tex Robin. The number of truly excellent boot craftspeople with thriving businesses is a testament to the value people place on this icon of American style.

No bootmaker worth his or her salt would consider making a custom pair of boots without fitting you in person. It may seem like an extravagance to travel to the wilds of West Texas just to have someone examine your arches, but artisan bootmakers say it’s essential in getting the right fit. Each bootmaker boasts their own method—from measuring your feet and calves, to observing how you walk, and applying pressure to different parts of your foot. Part of the fitting process involves making a last—a wooden form that models how your individual foot will occupy the interior space of the boot—that is used to mold the boot leather. The artisan uses the last to tack down damp leather and affix the sole with pegs. Many will keep the last in case you want to place another order in the future.

The tools used to hand craft boots have changed little over time—simple pliers, shears, punches, hammers, and awls. What distinguishes each bootmaker are the finishing techniques, many painstaking and so individual that it is often possible to tell the maker by their stitching technique or a familiar motif. Hand-tooling is one such laborious technique, related to saddle-making and involving special experience with stamping and carving leather. Pitiado is another specialty in which artisans hand-sew cactus fibers into intricate designs, a process that may take weeks or even months to complete. Other signature designs may incorporate inlaid or overlaid colored leathers, and intricate stitch work.

Basic custom-made cowboy boots begin at a few hundred dollars, but quickly climb into the thousands for more unusual materials and special techniques. The reputation or popularity of the workshop, especially if it claims celebrities among its clientele, can also mean higher prices. Given the time and passion that go into each pair of boots, though, it’s a small price to pay for one-of-a-kind works of art that will not only last a lifetime, but may be the only items in your closet that will never go out of style.

Have you found a great pair of cowboy boots in your travels? Send me a picture or post a comment below!