HOW ITALIAN CAMEOS ARE MADE

HOW ITALIAN CAMEOS ARE MADE

Cameos involve carving in relief, or designing an image to project out of a background of a different shade of color. Conversely, in jewelry, engraving and intaglio refer to carving or cutting an image into a flat surface. However, cameos and intaglios may involve the same materials—seashells, glass, or other materials from sardonyx to carnelian. They may also be made using the same hand tools, abrasives, powdered stones, diamond wheels, and burins.

Seashells make an ideal material for cameos because of their beautiful semi-transparent layers of different colors or tones. African shells first arrived in Torre del Greco as ship’s ballast. Today, many shells are still imported from Africa and the Caribbean, as certain species have become prized for their coloration. The most common shell species used in cameo production today are Haliotissardonica, valued for its reddish brown coloration; Cassis madagascariensis, with a brown inner layer; Cassis rufa, which features a pale pink outer layer and a darker, more reddish inner layer; Cassis cornuta, a large shell with a whitish outer layer and and orange inner layer; and Strombusgigas, or queen conch, with its beautiful pink inner layer. Alternately, precious or semi-precious stones, including agate, onyx, and sardonyx, also make ideal materials for cameos because of their complex layers of coloration. Cameos may also be made of glass, though these are less common today than they were in the ancient world. 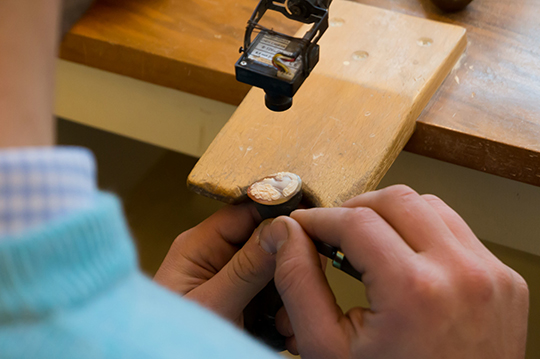 To make a cameo from a shell, first, the specimen is selected. Next, the shell must be left to dry for at least a year. Next, in an operation called scoppatura, the cameo-maker sands the whitish external layer with a diamond wheel to reveal the translucent pink, reddish, or brown layers beneath (originally a lathe was used). Next, the cameo-maker sketches the image he or she wants to create with a pencil on the transparent, light layer underneath. Once the outer shape of the cameo is cut, it is glued to a wooden spindle, making it easier for the artist to manipulate the small object and turn it by hand as needed during carving. The cameo-maker then grinds the edges of the piece down to the darkest layer, which serves as a contrasting background for the image that emerges from the top. Details of the figure are then engraved with a burin, a special tool with a sharp metal tip. Once the design is complete, the cameo is polished with oil and pumice, then washed and dried.

Although many works of cameo and coral stand on their own as exquisite art objects, most pieces are incorporated into jewelry. Today, many jewelers in Naples and throughout southern Italy incorporate cameos and coral made in Torre del Greco into their pieces. Cameos and coral are commonly combined with gold. By combining gold with different metals such as copper and silver, jewelers can achieve different coloration to complement the color of the cameo or coral. Rose gold (ororosa) is achieved by combining gold with copper. White gold (orobianco) combines gold with copper, nickel, and zinc. Yellow gold (orogiallo) combines gold with copper and silver.Many pieces of coral jewelry are finished with the addition of pearls, turquoise, or other precious materials.