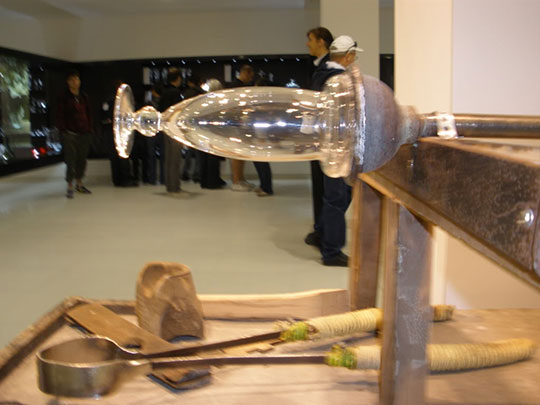 The roads of southeastern Ireland meander past ruined abbeys, thatched-roof cottages, sandy coves, and flocks of sheep. While this part of the country is known for these pastoral scenes, it’s mostly famous for what put its prosperous port city, Waterford, on the map: crystal.

Crystal originates through much the same process as glass: with a hot fire, a blowpipe, fine sand, potash, and just a few other ingredients. The difference is that lead oxide is added to crystal, making up 11 to 33 percent of the mix. It’s the lead that accounts for crystal’s most beloved attributes: its ability to refract light when cut into facets, its heft, and the pleasing bell-like tone it produces when you flick it with your finger. Add to that the reputation that Irish artisans hold as crystal cutters and engravers, and you’ve got a recipe for some of the world’s most esteemed tableware.

A Legacy of Glassworks

Glass was used in Ireland as early as the sixth century, when artisans coated chalices, brooches, and ceremonial objects with intricate glass designs, imitating gemstones. Though their work was very different from the clear crystal that would eventually dominate Ireland’s heritage, these medieval artisans demonstrated a stunning mastery of their material. It wasn’t until the 1600s that several non-Irish glassmakers brought to Ireland the kind of large-scale glass enterprises that were already flourishing in England and continental Europe. These glassworks employed skilled artisans and supplied people with lead glass for everyday needs, from tankards to windows.

English tax laws and export regulations prevented Irish crystal from being exported outside of Ireland until the 1780s, when the English Parliament allowed the Irish to trade freely. At that time the Penrose family revived an old glassworks in Waterford, an important port city, and began establishing a reputation for quality cut and engraved glass. Several glasshouses opened in Dublin and other Irish cities. The reputation of Irish glassmakers for their cutting skills began spreading across Europe and eventually to America, which is today the largest consumer of Irish crystal.

How Irish Crystal is Made

Many of today’s Irish crystal-makers craft crystal as in centuries past. The first artisan to touch a piece of crystal is the gaffer; his job is to lift the molten mixture on the end of a blowpipe, then twist it, blow into it, pull it, and cut it over an extremely hot chamber. Forming the entire vessel usually happens in a matter of minutes, when it is hot enough to be malleable, a skill that is honed through many years of experience. To form certain shapes and add spouts, handles, or other ornamentation, artisans use wooden and metal glassmaking tools, mostly custom-made in the factory. After all additions are affixed, the piece is annealed, meaning it is heated evenly then cooled so that all the components are completely fused. 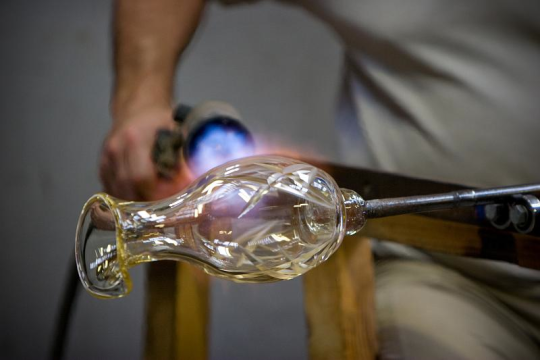 After the basic piece is formed, it moves to decoration, the most laborious part of the process. Today most crystal vessels are cut by hand, with the aid of a diamond saw and/or other electric wheels. Pieces may also be engraved with figures or words, using a small wheel coated with a special paste that creates a frosted appearance.

The headquarters of Waterford Crystal, a brand synonymous with Irish craftsmanship, is one of the country’s most popular attractions. On a guided tour, you can watch artisans hand-blowing, cutting, and engraving Waterford’s distinctive patterns. Scattered around the island, additional quality crystal makers with historic ties also make crystal according to traditional Irish methods.

Purchasing crystal in Ireland is great fun, but travelers should be aware of a few important facts. Irish crystal from the major houses goes through a rigorous quality control process, and you can rest assured of authenticity if you buy a new piece from one of the factory stores or authorized retail outlets. However, Waterford and other makers now outsource some of their production to Germany and several Eastern European countries known for their crystal artisans. Even certain pieces sold in the factory store may not have been made in the factory or even in Ireland, so be sure to check the labeling carefully and ask questions to avoid disappointment. Prices for Waterford crystal are fixed within the Republic of Ireland, whether purchased at the factory store or another retailer.

Second, buying antique pieces of Irish crystal can be a tricky business, because a lack of hallmarks makes it difficult to identify the source and maker. Many pieces of old glass may be labeled “Waterford,” but authenticating antique pieces from the famed factory can prove challenging even for crystal experts. If you buy an antique, consider getting a written appraisal, and stick to well-documented pieces. Classic items include stemware, bowls, and decanters, but the range of crystal objects is staggering, from pens to chandeliers and figurines. Old or new, classic examples of Irish crystal hold pride of place in many of the world’s best collections.