ITALY BEFORE THE ROMANS: The Etruscan Sarcophagus of the Spouses

ITALY BEFORE THE ROMANS: The Etruscan Sarcophagus of the Spouses

On the lid of a large terra-cotta sarcophagus dating from about 520 BCE, a husband and wife are shown reclining comfortably against a pair of stylized cushions.

The body of the sarcophagus is designed to resemble a type of dining couch that is recognizable thanks to depictions of such banquet furniture in ancient art from central Italy and across the Mediterranean. While their upper bodies face towards the viewer, the couple’s hips and legs seem to sink into the softness of the dining couch.

Rather than a somber memorial to the dead, we encounter two lively individuals with warm smiles. The man raises his hand toward the viewer, addressing us with the gesture of a genial host, perhaps inviting us to dine with them for eternity or to join them in some sort of convivial festivities. The couple probably once held drinking vessels and other goodies from a rich banquet in their hands, now missing.

The man’s upper body and feet are bare, his lower body covered with a cloak. He circles his arm around the woman’s shoulder in a loving attitude. The woman is lavishly dressed and wears a close-fitting cap as well as pointed sandals of the type that we see in Etruscan tomb painting.

Both figures displayelaborate hairstyles, with long braids draping around their necks and down their backs. The man’s hair splays across his back in a geometric pattern. His beard, too, is very stylized. Their almond-shaped eyes stare out at us with a lively yet abstracted sense of engagement. 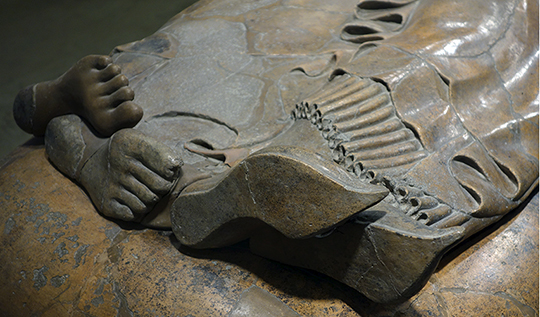 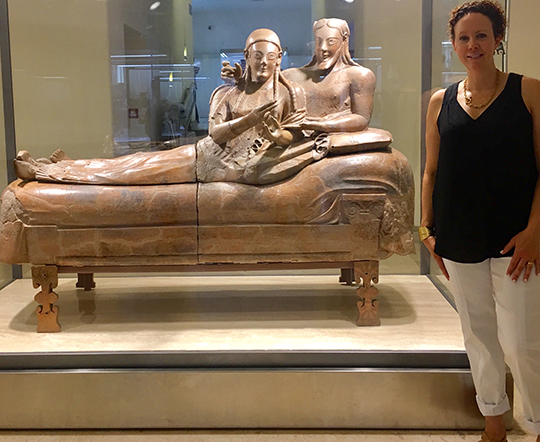 Where did this sarcophagus come from—and what happened to its occupants?

This amazing sarcophagus, commonly called the Sarcophagus of the Spouses, or the sarcofagodeglisposi,was discovered during the course of archaeological excavations in 1881.

It was discovered in a tombat the Banditaccia necropolis, outside of Cerveteri, a town known in antiquity as Caere. The founder of the Etruscan Museum at the Villa Giulia in Rome purchased the sarcophagus, which at that time consisted of some 400 fragments which had to be pieced back together. What a project it must have been!

While we cannot identify the original owner of the sarcophagus, it is clear that whoever commissioned it would have been a member of the city’s elite.Today, this sarcophagus is one of the most famous works of Etruscan art.

Why is it significant?

Stylistically, the figures on this sarcophagus resemble Greek sculptures of the same era. A distinguishing feature of this period is the so-called “Archaic smile,” a peaceful yet frozen facial expression that is usually associated with Greek sculpture of the sixth century BCE. The elongated proportions, stylized braided hair, and almond-shaped eyes also make it clear that our Etruscan sculptor was familiar with Greek models.

So, what makes this sculptural group Etruscan? Instead of being captured in a frozen stance like their Greek counterparts, this Etruscan couple reclines in a relaxed pose. In fact, they engage us with extraordinary directness and vivacity that is a hallmark of Etruscan art.

Banqueting and conviviality is a major theme in Etruscan funerary art. Art historians assume that earthly pleasures must have been a part of actual Etruscan mortuary rituals. In Etruscan tomb painting and on sculpted sarcophagi, we see everything from concerts to parades, food, drink, socializing, dancing, and other pleasures of life. The Etruscans, it seems, were expert revelers who wanted to take this perpetual celebration with them into the afterlife.

And in Etruria, public revelry included women as well as men. Many writers in Greek and Latin commented on the Etruscans’ strange custom of hosting elaborate—and mixed gender—banquets. In ancient Greece, by contrast, the symposium was essentially an adult male drinking party—no women or children allowed.

The appearance of women and men feasting and toasting together was seen as highly unusual, even scandalous, according to some Greek writers like Theopompus of Chios, writing in the fourth century BCE. Etruscan women “are expert drinkers and very good looking,” he tells us.

From what we know about various cultures around the ancient Mediterranean, the participation of women at such a raucous feast was highly unusual—except in Etruria. And women seem to have enjoyed a more privileged status in Etruscan society in general than their Greek or Roman counterparts. 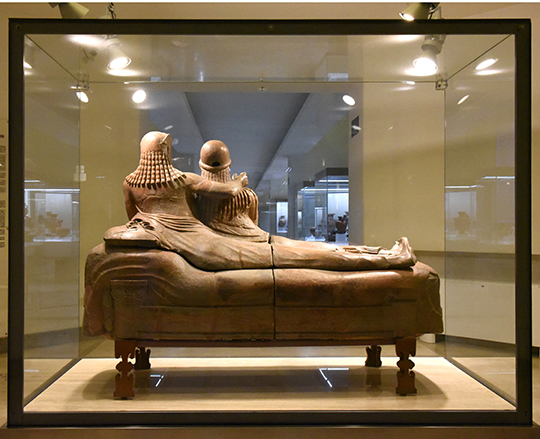 The Sarcophagus of the Spouses is a major achievement in terra cotta sculpture. The medium of terra cotta gives the artist greater freedom than marble, allowing for great surface details in the hair, the folds of the drapery, the eyes, the beard.

Also, we must admire the technical challenge of creating such a large-scale ensemble made with clay. No doubt the sarcophagus would have been fired in multiple pieces.Etruscan sculptors were masters of terra cotta, and painted terra cotta played a key role in the visual culture of Etruria. Can you imagine what this sarcophagus would have looked like when it was first painted in bright colors?

This sarcophagus is remarkably similar to another terracotta sarcophagus from Cerveteri depicting a man and woman that is presently housed in the Louvre Museum in Paris. These two sarcophagi are contemporary to one another and are perhaps the products of the same artistic workshop. The one in Paris conserves quite a bit of original paint.

A moment in time

As a work of art, the Sarcophagus of the Spouses conveys a great deal of information about Etruscan culture and its customs in the sixth century BCE. This work stands as a symbol for the peaceful, convivial culture of Etruscan aristocrats at this time.

For now, all is well in Etruria, but nothing stays the same forever, even for the pleasure-loving Etruscans. As the fifth century BCE approaches and the Romans begin to consolidate their power, things are about to get a lot more complicated for the Etruscans. 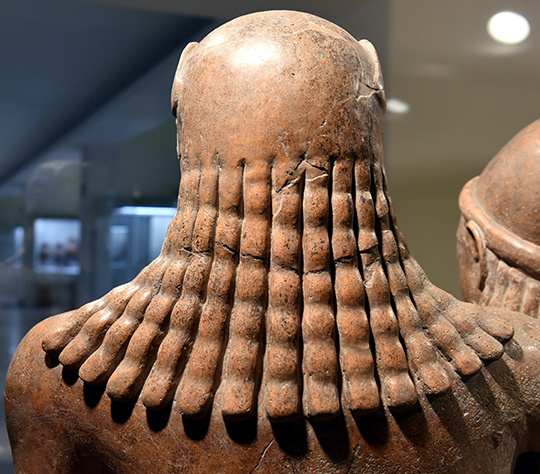 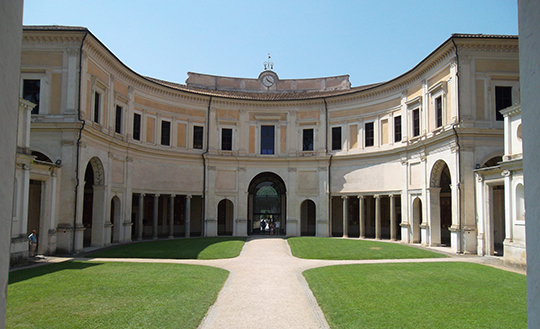 Where to see it

Open 9am to 8pm Tuesday through Sunday

On a recent visit to the National Etruscan Museum in Rome at the height of the tourist season, my kids and I arrived at opening time and had the entire museum to ourselves for nearly an hour. What a treat! While your friends are fanning themselves in the endless lines at the Colosseum, you could spirit yourself off on an incredible journey to the quiet galleries of this fantastic museum—the premier collection of Etruscan art in the world—where you can experience Etruscan culture firsthand. Don’t miss it!

And if you want to learn more about the ancient Etruscans and their art, join my online course on Etruscan art here: lauramorelli.com/etruscans.