This month I am pleased to welcome my fellow author, medievalist, and Venetophile friend Octavia Randolph. Octavia has written a fantastic series of historical novels set in 9th-century England and Scandinavia, the Circle of Ceridwen Saga. Most recently, her historical novel, Light, Descending, draws us into the mind of one of the most fascinating figures of the nineteenth century: the artist and art critic John Ruskin. Ruskin, a passionate lover of Venice, captured the city in a series of lovely watercolors. But it is Ruskin’s obsessive and flawed character that holds us captive in Octavia’s beautiful new book. Here, in a piece for lovers of Venice, Octavia explains Ruskin’s fascination and devotion to this majestic, atmospheric, yet crumbling city:

John Ruskin was one of the great figures of the 19th century, one of the truly seminal thinkers on art, architecture, and social justice. I’d like to share with you some thoughts on his relationship with Venice, which he believed was the world’s supreme architectural and cultural expression, or as he said, Venice was “the history of all men, not in a nutshell, but in a nautilus shell.” 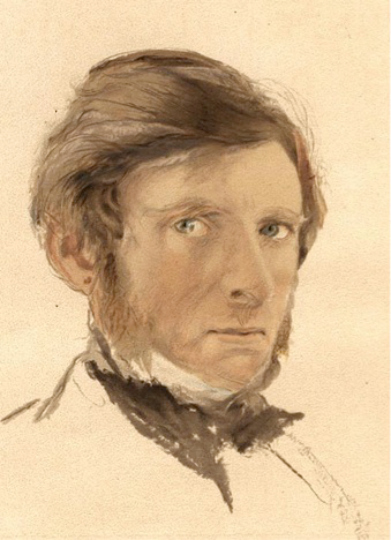 The life of John Ruskin exactly mirrored that of Queen Victoria. They were both born in 1819, and died a year apart, he in 1900 and she in 1901. Ruskin had a decidedly bifurcated career; the first half of which was largely devoted to thinking and writing and lecturing about art and architecture, of which his greatest and most lasting contribution was The Stones of Venice, a magisterial work on the history of La Serenissima, told through its architecture.

Much of the second half of his career was devoted to issues of social and economic justice. In 1906, six years after Ruskin’s death, the incoming Labour Members of Parliament were polled as to whose books were most influential in their personal development, and Ruskin’s books ranked first, besting those of the Bible, Shakespeare, Dickens, Carlyle and many others. In other words, he left a profound impact on society a century ago.

Ruskin spent about 18 months of his life living in Venice. From boyhood on he travelled every Summer on the Continent with his parents, and the first time he saw Venice he was 16; they stayed there a week.

As a 22 year old Ruskin returned to Venice. After furiously drawing all he could see, he felt overwhelmed at his inability to capture the city. He wrote to an Oxford friend, “I have put up my pencils, rather sulkily, by the bye: for this place is quite beyond everybody but Turner.” The great JMW Turner, was of course, Ruskin’s life-long hero, whose cause Ruskin championed for his entire life.

He returned in a later drawing trip, spending September and October 1845 there, a trip on which he made many of his most beautiful and expressive record drawings. Venice was very much under assault, in Ruskin’s view, by this time. The occupying Austrians (Napoleon had seized it and looted it in 1797, and then handed it over to the Austrians) had nearly completed the causeway from the mainland, put in gas lighting, and as he wrote in despair to his father, “After whitewashing the Doge’s palace…they are scraping St Mark’s clean. Off go all the glorious old weather stains, the rich hues of the marble which nature, mighty as she is, has taken ten centuries to bestow.” And, “It is misery for me to stop here, but every hour is destructive of what I most value, and I must do what I can to save a little.” He was saving it of course, by drawing it, recording it. 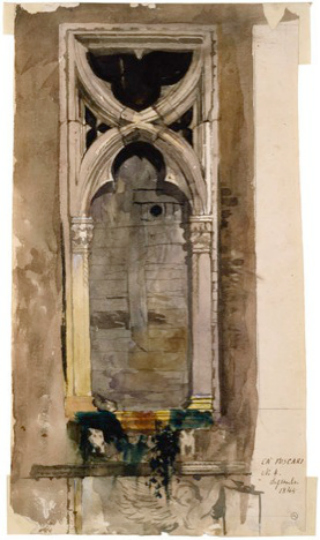 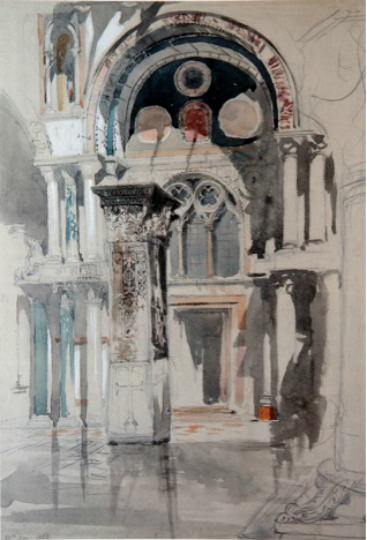 Part of St Mark’s Basilica – the South side of the Baptistery, John Ruskin 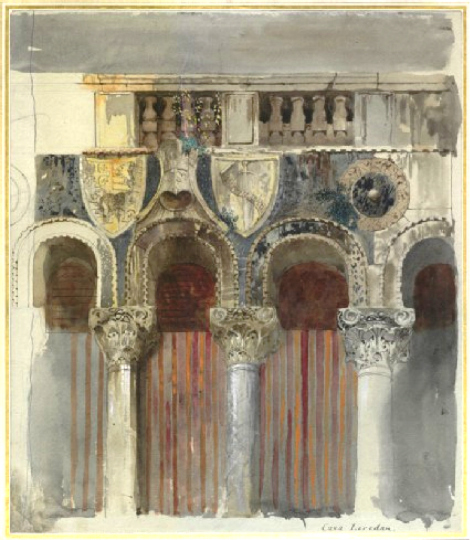 Of the Casa Loredan, also called Palazzo Corner-Loredan, Ruskin said “which will, I believe, be felt at last, by all who examine it carefully, to be the most beautiful palace in the whole extent of the Grand Canal.” This was what Ruskin saw and recorded in 1845; by 1867 the building became a municipal office, and was stripped of the colour and detail that Ruskin had cherished. 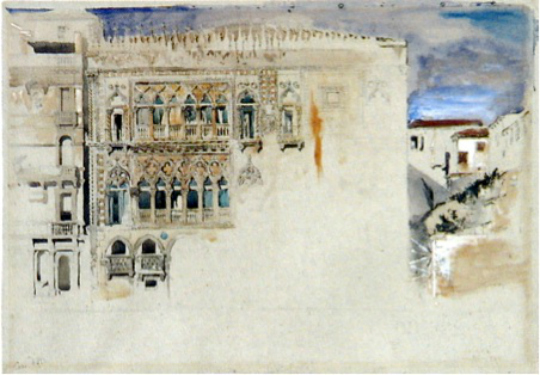 Marie Taglioni owned the Ca’ d’Oro when Ruskin witnessed it, during that 1845 visit, being set upon by “restorers” chiselling off the very cabled ornament he was furiously attempting to draw; the prima ballerina was modernizing the house and sold off bits and pieces of Ca’ d’Oro, including the huge interior marble stair, said to have been the most exquisite in Venice.

But the trip that mattered most, the trip that he had a true mission for, was in fact his delayed wedding trip to Venice, with his young Scottish wife Effie Gray. They spent two winters there. The first four months they lived there, beginning in October 1849 were truly revelatory to Ruskin.

What was he doing in Venice? – he wished to document its monuments for what would eventually become the three volume Stones of Venice – going to this den of inequity – Venice – much against his father’s wishes (and his father underwrote everything Ruskin ever did, every trip he took, every painting he ever bought, and it was terrifically hard for John to defy him as he was so dependent on him.) 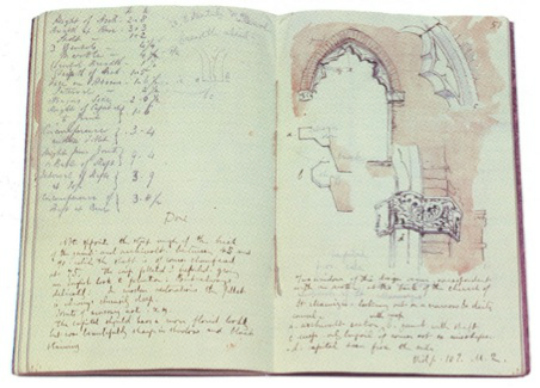 One of Ruskin’s pocket notebooks; this is Casa Loredan again.

There are two important quotes about The Stones of Venice which bear both repeating and reflection. William Morris called On the Nature of Gothic, the piece nestled in the heart of Volume II…“one of the most important things written by the author, and in future days will be considered as one of the very few necessary and inevitable utterances of the century.” Henry James said of The Stones of Venice, “Ruskin has made Venice his own, and in doing so, has made her the world’s.” 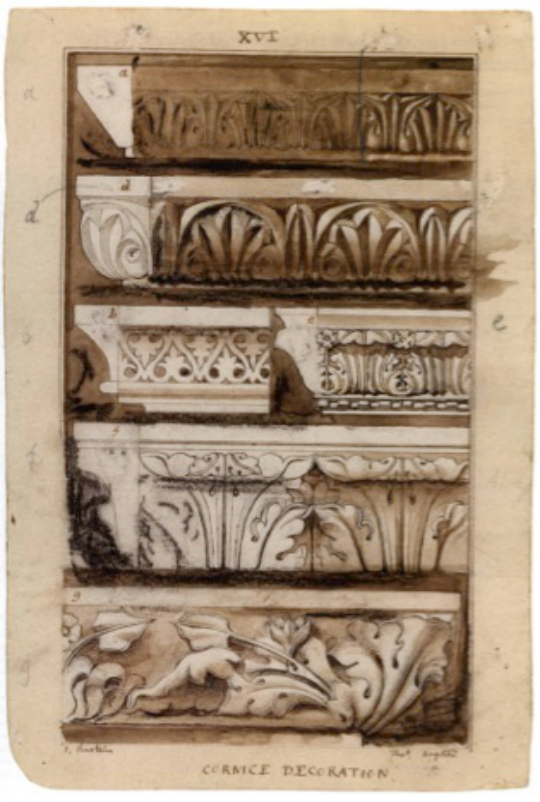 These are the kind of detailed studies that Ruskin did that prompted a later observer to note that if Venice were ever destroyed, it could practically be reconstructed through Ruskin’s meticulous drawings.

In wasn’t entirely all work, especially during the second winter Ruskin and Effie spent in Venice. Ruskin usually asked Effie to go out without him at night, but during Carnivale she wrote to her mother, “I am rather tired today as I was up late last night, John and I having taken it into our heads that we would mask and have some fun…We hired a couple of dominoes

[these are enveloping cloaks], black with black masks and white gloves, and reached the square about ten. I laughed so that I could scarcely go on and John, who was a grave as possible, did the thing capitally. We found quantities of masks in dominoes and fancy costumes of all kinds parading about and entering the Cafes to throw bonbons…”

Despite such moments of revelry, we know the five year marriage to Effie remained unconsummated. Effie had hoped that going to Venice in the second year of her marriage would in fact signal the beginning of the physical marriage, but it did not. However, one can easily see from reading Effie’s letters that the time she spent with John in Venice was much the happiest of their entire relationship – due not only to the charms of La Serenissima, but the fact that it was one of the few times when the elder Ruskins were not also with them.

One of Ruskin’s biographers, John Batchelor, actually posits, and I think with cause, that Ruskin’s displaced sexual drive found expression in his lust and love for Venice. Venice becomes a love object for him. Certainly both in The Stones of Venice and in letters to his father he uses deeply sensual language to describe his attraction and attachment to the city – he must eat it, devour it, stone by stone. And certainly no beloved ever caused its lover more pain than Venice caused Ruskin.

So. Let’s consider Ruskin’s Venice. As difficult as it is for us to imagine, Venice was not universally admired by the Victorian traveller; it was altogether too ornate, unexpected, and visually chaotic for many. And perhaps it also offended Victorian moral sensibilities; as historian J.G Links points out, “You might see it as a robber’s den, for everything in it was stolen.”

The fact was that Venice, although it had always attracted a certain number of pleasure-loving aristocrats, did not entice the upper-middle classes until The Stones of Venice spelled out her charms and drove home the necessity of experiencing this fabulous mishmash of architectural styles and moral lessons in person. And even then it took some time. Volume I of Stones came out in March 1851, and sold few copies. Volumes II and III came out two years later, in 1853, and then people began to take notice, and of course, On the Nature of Gothic was in volume II. A reviewer in The Daily News noted that no longer could Venice be looked at as an example of “barbarous” taste, with St Mark’s a mass of “ill shaped domes; its walls of brick incrusted with marble; its chaotic disregard of symmetry in the details; its confused hodge-podge of classic, Moresque, and Gothic.” Ruskin had proved that the architects and builders of the middle ages were “artists of profound and tender feelings.”

Ruskin called himself a “foster child of Venice”, and felt both responsible for and frustrated with it, much of the frustration due to the fact that the Republic had destroyed itself, and he could not save the remaining architectural fragments of its illustrious past.

By his late 50’s Ruskin was deeply troubled by the influx of tourists he thought himself accountable for; during his long over-wintering stay of 1876-77 he removed himself from the Grand Hotel to the modest Calcina on the Zattere to escape those hordes who only milled about San Marco and never penetrated into any of the fascinating calles and narrow, backwater canals. And in fact in his 1877 Guide to the Pictures in the Accademia he argues that people should actually be made to pay a fee to enter Venice.

When Ruskin returned to Venice to over-winter there from1876-77 it was after an absence of 16 years; he hadn’t been there since his last trip with Effie in 1852. Now, struggling with mental illness, he was preoccupied with two other young women: St Ursula, and Rose LaTouche. Ursula, the virgin martyr who is the subject of the series of beautiful paintings by Carpaccio in the Accademia, held Ruskin in thrall in his later years. In 1858 Ruskin had met ten year old Rose LaTouche, and over the years proceeded to fall violently in love with her, an obsession which caused both of them great pain. Rose died in May 1875, when she was 27, and the Virgin Rose and the Virgin Ursula became one love-object for him.

Venice, along with Turner, was truly a constant in Ruskin’s life, inspiring his greatest work, and haunting his dreams. He writes much about Venice in the Brantwood diary, the diary in which he documents his own psychotic break in 1878s, as he slipped into the abyss. Such is the abiding power of the Most Serene Republic. 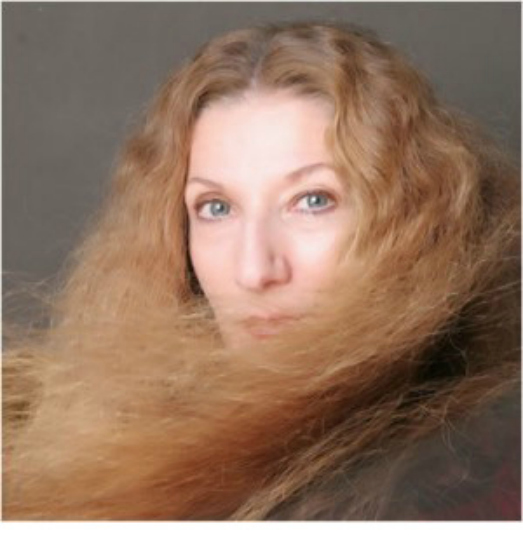 Octavia Randolph’s most recent work is the biographical novel about John Ruskin, Light, Descending. She is also the author of the best-selling historical adventure Circle of Ceridwen Saga, set in 9th century England and Scandinavia, and the novellas Ride: The Story of Lady Godiva, and The Tale of Melkorka. Visit her at octavia.net.