Laguiole Knives: What To Ask Before You Buy

Laguiole Knives: What To Ask Before You Buy 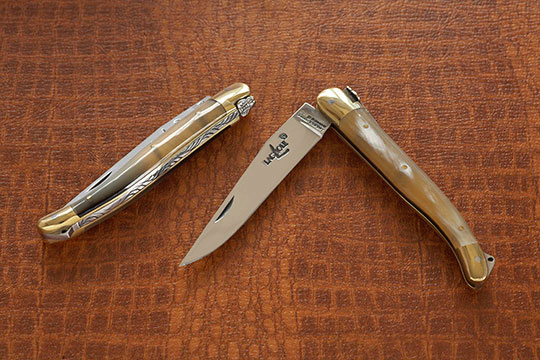 Photo: Dawn Smith for Made in France

The town of Laguiole (pronounced la-yull) is situated in a rural part of central France, where shepherds utilized a special kind of knife for many centuries. In the 1830s, a local man named Pierre-Jean Calmels transformed the traditional knife into a folding model, and the design caught on. Today, Laguiole knives are sold all over the globe, but they are not all created equally.

1. Where was it made? Today, many companies in France, across Asia and elsewhere make “Laguiole” knives, but the name refers only to the form of the knife and has little to do with the original versions. Only a handful of Laguiole knives today are actually made in Laguiole; even fewer are crafted by hand.

2. What materials were used? The classic Laguiole knife has a slender, curvilinear design comprising a handle in horn or wood and a carved metal spine. Handles may originate from different parts of the Aubrac cow or other mountain animals; the tip of the horn is considered more desirable than the interior parts, both for its durability and beautiful veining.

3. How valuable is it? Numerous factors can influence the price. What materials are used for the handles? Were the metal designs on the spine made by machine or by hand? Does the spine have a mark, like a bee, that is considered desirable?

4. Is the maker known? Some of the world’s best knife designers have created and signed models of Laguiole knives. Signed pieces and well-known makers command the highest prices.

By the 1930s, artisanal knife production in Laguiole had been subsumed by the more industrial knife making center of Theirs. In the 1980s, however, a company called La Forge de Laguiole was founded with the high-minded goal of reviving the town’s tradition of handcrafted knives by employing local, able-handed carvers. Today, the best-quality handmade Laguiole knives are made at La Forge de Laguiole. You can travel to central France to buy one, or visit one of their sleek Paris showrooms.

Do you own a knife from Laguiole or another knife-making capital of the world? Drop a comment below. I love to hear your stories!