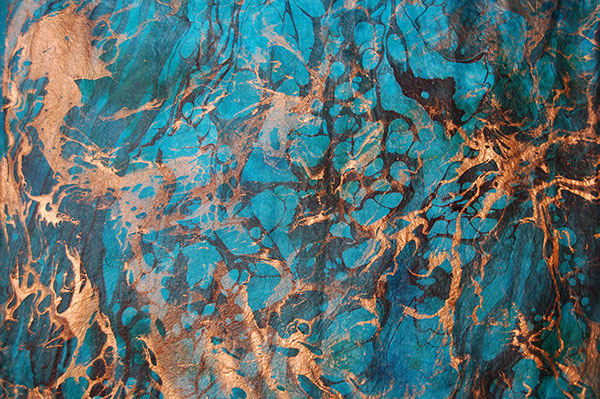 Salt air blends with the scent of hot wax emanating from the batik-maker’s shop, little more than a beachside shack. On a line, a dozen freshly printed cloths flap in the breeze, a cacophony of color. A slight Malaysian man appears at the door, dabbing beads of sweat prompted by the open fire, the blistering equatorial sun, and his labor of love: decorating batik fabric by hand.

No one knows how long artisans in Southeast Asia have been making batik, the brightly colored fabric that is printed using a wax-resist process. Although batik is also crafted in Japan, China, India, and some countries in West Africa and South America, there is no other region as inextricably linked with batik as Southeast Asia. Indonesians, and especially Javanese, have swaddled their infants in it, married in it, wrapped their dead in it; batik is an essential element of daily living. In neighboring Malaysia, where Indonesian batik traditions have been influential, the burgeoning tourism and fashion industries have begun to take this craft in new stylistic directions.

The basic process of batik involves creating designs in wax in order to prohibit dye from coloring the cloth in those areas. Artisans begin by stretching the fabric—usually cotton but sometimes silk or linen—over a wooden or metal frame. In Malaysia, batik artisans are known for their hand-drawn designs, a technique known as batik tulis. The artisan draws the design using a pencil, then traces over the design using a traditional, stylus-like tool called a canting. The canting, invented in Java, has a small copper receptacle with a spout that allows artisans to apply the hot wax in a controlled stream. Alternatively, they apply the hot wax with a brush. After waxing, the fabric is immersed in a vat of dye, dried, then waxed and dyed again until the desired effect is achieved. Traditionally batik-makers created natural dyes made from the highly prized indigo plant, as well as roots, bark, leaves, and seeds, though today synthetic dyes are common. The fabric is rinsed in hot water to remove the wax, then hung to dry. Often the design is embellished with hand-embroidery or sequins.

An alternate technique called batik cap relies on stamps, often made of copper, rather than hand-drawn designs, a faster process that makes for more regular patterns. Artisans dip the stamps into wax and apply them to the fabric before dyeing. Many of these stamps—with intricate geometric, floral, and animal motifs—are works of art in themselves made by specialized craftspeople.

Today batik is a thriving industry across Malaysia, with production centered in factories or semi-industrialized settings in which some steps are farmed out to work-at-home batik painters. Several contemporary Malaysian fashion designers have made batik a staple of their lines, designing modest tunics and headscarves for Malaysia’s predominately Muslim women, as well as outfits destined for European and American consumers. Today batik artisan enterprises, in which the production is entirely carried out by hand and within the same family, are concentrated in just a few areas.

Malaysia’s complex textile scene makes locating an authentic, handmade batik souvenir challenging for even the most seasoned international shopper. Many screen-printed fabrics mimic handmade batik. “Batik” items churned out for the tourist trade, including picture frames, placemats, cushion covers, and swimsuit cover-ups, are not necessarily traditional. It’s easy to arrange a batik factory tour, but not so easy to judge what constitutes quality in the shops.

A good place to start is the craft museum and workshops inside the Kompleks Budaya Kraf (http://www.kraftangan.gov.my) in the Malaysian capital of Kuala Lumpur. Government-sponsored craft emporia, operating in several Malay states under the name Karyaneka (http://www.karyaneka.com.my), sell quality batik that is a safer bet than trying to locate a treasure among the piles of fabrics stacked high in the city’s markets and shops.

The most traditional choice you can make is a batik sarong, a wide cloth tied or belted at the waist, considered traditional garb for both men and women in Southeast Asia. To ensure that you buy a traditional handmade batik textile, and not one of the machine-made, screen-printed versions, examine both the front and back of the fabric carefully. A true batik will be equally bright on both sides, whereas a screen-printed imitation will be lighter on one side. A quality piece will have been executed with wax on both sides of the fabric, so that the design is exactly the same on the back and front.

If you’re serious about coming home with an authentic piece of batik, as well as enjoying an immersive cultural experience, arrange an excursion to Kelantan or Terengganu, rural states located on Malaysia’s quiet east coast. This is truly Malaysia’s heartland of batik. Kota Baharu, the capital of Kelantan state, is great place to see batik being made in seaside family workshops, as well as to appreciate other traditional crafts like silversmithing and the making of spinning tops and kites. Several tour operators in Kuala Lumpur can help you organize excursions to Kota Baharu and nearby coastal villages, where you can witness the ancient art of batik firsthand.