Oaxacan Textiles: What You Should Know

Oaxacan Textiles: What You Should Know 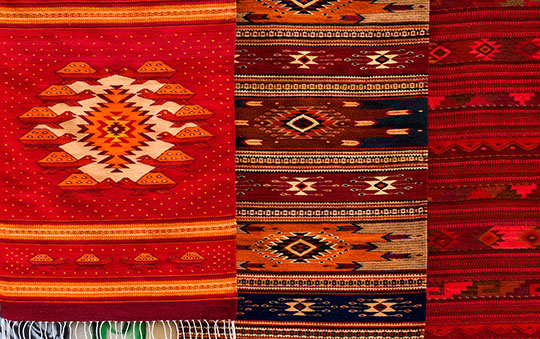 Hanging from the wrought-iron balconies of Teotitlán del Valle, rugs flap gently in the breeze. The setting sun creates shadows across swaths of purple, red, and blue, illuminating diamonds, zigzags, and snarling serpents. For some two millennia, weaving these colorful textiles has been the lifeblood of residents of this humble village in southern Mexico. Today, visitors from around the globe flock to the state of Oaxaca, where it’s impossible not to be smitten with the colors and forms that characterize the region’s strong folk culture.

Incongruously, the relatively poor region of Oaxaca boasts one of the richest craft traditions in all of Mexico. The state of Oaxaca also counts the country’s largest indigenous population, descended from the Zapotec Indians who flourished in southern Mexico as far back as 2,500 years ago. Its capital, Oaxaca City, as well as the surrounding towns and villages, are chock-full of artisans’ studios and shops selling hand-carved wooden animals, colorful pottery, silver jewelry, leather goods, and folk art. Local crafts remain among the region’s most important industries, and a large percentage of the population is involved in creating pottery, wood carvings, rugs, and other goods for the local and export markets. Of these, textiles hold pride of place.

Long before the Spanish arrived in the New World, the Zapotec Indians of southern Mexico were already cultivating cotton, spinning the fibers, then dyeing them with natural dyes made from plants, insects, and minerals to create brightly colored diamond forms, zigzags, and other geometric and animal forms. The Zapotecs’ impressive temples were decorated with sculptures depicting geometric patterns and great serpents, lizards, and other jungle animals. The weavers committed these designs to memory from childhood, when they watched their parents and grandparents crafting rugs and serapes needed for everyday life. These same themes are repeated to this day in Oaxacan weavings. Traditionally, both men and women have been active weaving in Zapotec communities.

Originally weavers used simple floor or backstrap looms, which maintained tension in one set of threads called the warp, while they interlaced the weft, or the horizontal weave, through them to create a design. In the 1500s, Dominican friars from Spain introduced the upright treadle loom to these communities, and the Zapotec weavers added this relatively simple wooden contraption to their repertory. The Spanish also introduced churro sheep, and over time, wool became the staple for Oaxacan weaving. The advantage of the treadle loom was that it sped up the weavers’ process and productivity. Today, treadle looms made with milled lumber and metal fittings are the norm, their overall form having changed little since the conquistadors introduced them three centuries ago. On this particular type of loom, the warp attaches to the loom on two sides. When the rug is complete, the weaver cuts the fibers to free the piece, creating fringe on two sides.

Modern technology has brought certain conveniences to Zapotec weavers, but even today, many insist on the original techniques of their ancestors. Traditionally, the Zapotec raised sheep, sheared the animals, then washed and dried the wool. From there the wool would be carded, the laborious process of unfurling the wool into long strands that can be spun onto spindles and readied for weaving.

Natural dyes imparted rich colors used in the designs. Most of today’s weavers use commercial dyes rather than the natural ones of the past, for convenience and to achieve a wider range of colors. However, a handful of weavers still use natural dyes made from indigo, moss, nuts, leaves, bark, and other natural products. Cochineal, a dye derived from a particular cactus-eating insect common in Oaxaca, produces a distinct shade of red associated with Zapotec weavings. The bodies of the female cochineal, when ground and made into dye, create various shades of crimson and orange highly valued in fabric designs.

Where to buy in Oaxaca

If you travel south of the border, you can find excellent deals on quality Oaxacan textiles by going directly to the source. Without a doubt, the best place to see weavers in action is Teotitlán del Valle, a small village in the foothills of the Sierra Madres, about a half-hour drive southeast of Oaxaca City. Weavers have been working in Teotitlán del Valle for around 2,000 years, and the town retains the flavor of a historic artisanal village.

Many of the weavers in town welcome visitors into their home studios, an excellent way to appreciate not only their craftsmanship but also to immerse yourself in the local culture. In many cases, you can watch weavers at work at their looms and purchase or commission a special rug. In addition to the weavers’ studios, you can browse authentic textiles along the main thoroughfare through the village Avenida Juárez, which features numerous shops and markets selling quality rugs. Many of these shops also host live demonstrations. Artesanías el Centro, an artisan market in the center of the village, is another good place to browse. Wherever you buy in Teotitlán del Valle, you can expect to pay less than in Oaxaca City and certainly less than back home in the United States.

If you only have time to shop in Oaxaca City, try the Mercado de Artesanía for authentic rugs brought in from the weavers of Teotitlán del Valle. Prices are relatively low and quality is high, so this is a good place to buy. If you want to learn more about the history of these colorful weavings, the Museo Rufino Tamayo and the Regional Museum of Oaxaca, both in Oaxaca City, contain impressive collections of historical and contemporary weavings.

Keep in mind that many of the more portable (and more affordable) pieces—including place mats, pillow covers, and bookmarks—are recent inventions mostly geared toward the tourist trade. You should always buy something you like, but for authenticity’s sake, it’s a good idea to stick to traditional and historical textiles such as room-sized rugs and serapes. If you’re interested in starting a collection, remember that these characteristic pieces tend to hold their value over the long term.

Prices for genuine Oaxacan weavings start at just a few dollars for small decorative items and reach several thousands of dollars for large pieces or custom designs. An average room-sized rug is a great deal at just a few hundred dollars, considering the time and artisanship that goes into making such a piece. By shopping in Oaxaca, you will save as much as sixty percent off prices in the United States.

Whether you buy in the United States or in Mexico, remember that in order to ensure you’re buying the most authentic textile, whom you buy from is at least as important as what you buy. Whenever possible, buy directly from the weaver or in an artisan co-op or market, where you can talk with weavers face to face. Otherwise, buy from a reputable dealer who can educate you about your purchase and provide information about the origin and the weaver in writing. Museum shops are usually a safe bet, but you will want to avoid retailers around airports, cruise ship docks, and souvenir shops, where you’re likely to overpay for a lesser quality or mass-produced item. If you’re serious about bringing home an authentic, quality textile from Oaxaca, there’s nothing like meeting the weaver and taking in the sights, smells, and sounds of the place where this 2,000-year-old Zapotec tradition began.

This piece originally appeared in my column for Su Casa Magazine.

Have you discovered a textile treasure in central or south America? Drop a comment below. I love to hear your stories!