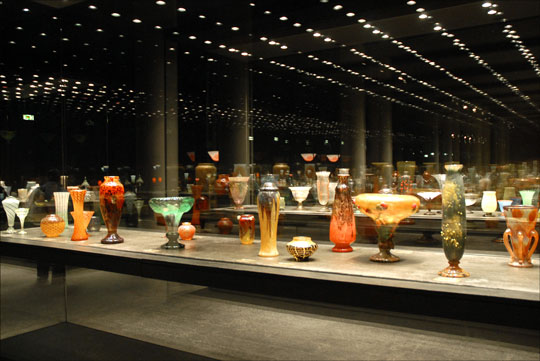 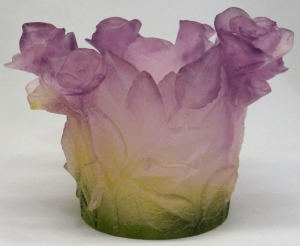 Pâte de verre begins with powdered glass and coloring agents, which are mixed into a gooey paste, then poured into a mold. The technique allows for subtle coloration and patterns such as flowers or swirls in relief across the surface of a vessel.  The mold goes into a kiln, where the pâte de verre melts into the intricately carved designs of the mold, and results in a relief pattern once the piece has cooled.

Although this technique has been used since ancient Egypt, French artists in the late nineteenth and early twentieth centuries revived pâte de verre and took it into new directions. Lalique, a glassworks founded by the former jeweler René Lalique (1860-1945) brought pâte de verre into vogue in France thanks to its distinctive Art Nouveau and Art Deco styles. 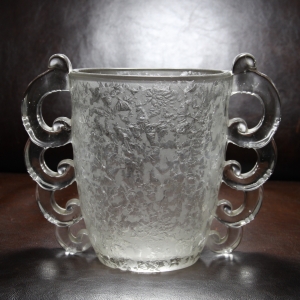 Another glassworks from northeastern France known as Daum pioneered new techniques and styles in pâte de verre, imparting a lovely translucent finish to its popular glass pieces. The Daum factory added lead to the mixture, making it closer to crystal. Daum was founded in 1878 by two brothers, Auguste and Antonin Daum, who left established careers as an attorney and an engineer to take over a glassworks their father had purchased. The brothers quickly became known for their colored lamps, many in the shape of mushrooms and flowers, with wrought-iron bases.

Daum’s real claim to fame, though, is bringing Art Nouveau style to life in glass, with its characteristic natural forms of flowers, grass, leaves, undulating plants, animals, and scrolls. In later years, modern artists such as Salvador Dali designed pieces for Daum in pâte de verre including snails and surrealist vases that appear broken. Today the Daum glassworks is still considered one of the masters of pâte de verre.

For more about authentic shopping in France, click here.

Have you discovered a beautiful work of pâte de verre? Drop a comment below. I love to hear your stories!