People of Color in Renaissance Venice

We all know of Othello, the famous Moor of Venice, but Shakespeare’s fictional character had some historical basis–even in Shakespeare’s own day.

Venice was a cosmopolitan city, a major international port, and Europe’s gateway to the rest of the world. If you visited Venice in the 1500s, no doubt you would have seen people of many different races, speaking different languages, and practicing different religions.

During the Renaissance, the Venetian Republic was renowned as a model of cultural and religious tolerance, at the same time that its authorities locked up Jews at night in the world’s first ghetto, and many of its people took the branding iron to their own slaves. Even in our own time, we can appreciate the irony. 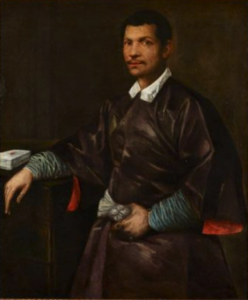 The term “Moor” (Latin morus and maurus / mauri, and its regional European variations such as more in Old French, moro in Italian) may stem from the Greek word mavro. In any case, it conveys the idea of “black,” “blackened,” or “charred.”

Even though the word “Moor” is sometimes thought to equate to “Muslim,” there is no historical basis for that association, and no evidence that Renaissance Venetians equated skin color and religious faith, though some may have. In sixteenth-century Venice, there were blacks, there were Muslims, and there were also variations of many other skin colors and faiths in the city.

The term “Saracen” (Greek sarakenos, Latin saracenus), carried a slightly more specific connotation of “Eastern,” and sometimes “Muslim.” It was the word the Venetian Crusaders used when stirring people to launch medieval religious wars to wrest Jerusalem from the hand of the infidel, and to justify the plundering of Constantinople. At the same time, Venice welcomed merchants from the Near East, and they must have been a familiar sight in the city.

In short, documents of the time show that the terms “Moor” and “Saracen” were often used indiscriminately and without cultural sensitivity, to say the least. Interestingly, we know that some Venetians of color took on the surname “Bianco,” which means “White.” In Renaissance Venice, it seems that the lines were very blurred indeed.

Slavery was a fact of life in Renaissance Europe. Through the early Middle Ages, the Norse (Vikings) were powerful slave brokers, capturing people in the northern European and Baltic regions, and selling them into slave markets of western Europe. Black Africans were also captured and brought into Europe, and many of them ended up in Venetian households and boatyards.

Slavery was not always a life sentence, however, at least not in Venice. There are many documentary references to slaves being freed for various reasons, including dutiful service and personal affection for those in the household. Slaves were often freed upon the death of the master (as in the case of Zenobia in The Painter’s Apprentice), and slavery did not automatically carry on to the next generation.

Some people of color brought to Venice as slaves were branded on the breast or shoulder to indicate ownership. If they stole something or committed another crime, they might be branded on the forehead, cheek, or under the eye. (And any white Venetian “marked with fire” in such a manner would have surely had an entanglement with the law, just like Trevisan’s boatman in The Painter’s Apprentice.)

Writings of the time described Moors for their physical prowess, strength, and for their skill at dancing and singing.

A guidebook to Venice written in 1493 by Marino Sanuto takes note of the city’s black gondoliers, and the painter Vittore Carpaccio portrays them in his Miracle of the Relic of the True Cross, painted about 1494. 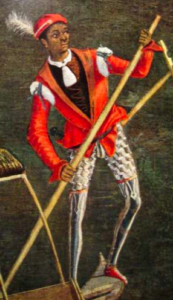 Detail from Carpaccio’s Miracle of the Relic of the True Cross in the Accademia, Venice

In addition to slaves, freed black Africans were also engaged in domestic service. The famous Isabella d’Este, Marchesa of Mantua, was known for procuring freed and enslaved Africans from Venice to work in her household. In 1491, she wrote to Giorgio Brognolo, her Venetian agent, to ask him to locate a young servant girl “as black as possible.”

Freed slaves in Venice are documented as working in jobs including bakers, mattress-makers, poultry sellers, dyers, and farmhands. Working as a goldbeater, like Cristiano in The Painter’s Apprentice, would not be outside the realm of possibility.

Through the Renaissance and later, romanticized images of “Moors” remained popular across Venice. Today, you can still find “Blackamoors” fashioned into jewelry and decorative objects across the city. 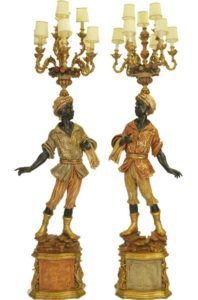 In addition to unequal relations between masters and servants, many of which resulted in bi-racial children, there are also some rare accounts across Renaissance Italy of marriage and cohabitation between blacks and whites. Giovanni Morelli, a Florentine diarist of the fifteenth century (perhaps a distant relation of mine? I don’t know!), reports that his uncle married a black woman and that they had children together.

In The Painter’s Apprentice, Cristiano the battiloro faces nearly insurmountable hurdles to become recognized as a guildsman in his trade, as well as a legitimate love interest for Maria. Even in The Most Excellent Republic of Renaissance Venice, the challenges of making a living–and making a life–were real indeed, especially for people of color.