It’s easy to imagine why plague outbreaks inspired terror among residents of European cities in the pre-antibiotics age. For the most part, the source and spread of the disease were poorly understood, even though officials took various measures to try to stem contagion. Plague took the young, the old, the sick, the vibrant, the rich, the poor.

As a waterlogged city, a major maritime port, and Europe’s gateway to the rest of the world, Venice was particularly vulnerable to outbreaks. Between 1456 and 1528 alone, there were fourteen documented plague outbreaks in the city. The 1510 outbreak, the setting for The Painter’s Apprentice, took the life of 32-year-old Giorgione, one of the city’s most celebrated painters, who we now know died in the Lazzaretto Nuovo.

The 1630 plague is probably the most well remembered in Venice, partly because it took more than thirty percent of the city’s population. But it’s mostly remembered because it inspired Venetians to build their famous church of Santa Maria della Salute as a votive offering for deliverance from the devastating outbreak.

The bubonic plague is usually contracted via a flea bite, but we humans didn’t figure that out until the turn of the twentieth century. Less commonly, it might be spread by exposure to an infected person, through a cough or a kiss, for example. The bacterial infection caused by the Yersinia pestis bacteria brings on symptoms within one to seven days after exposure.

In sixteenth-century Venice, it must have been common to have been bitten by fleas, if you think about the number of rodents, cats, and other small animals in the city, not to mention the fact that everyone slept on mattresses stuffed with straw. A person might experience the first signs of plague like a sudden onset of flu: fever, chills, headache, fatigue, and general malaise. Within hours or days, painful, swollen lymph nodes around the neck, groin, and armpits might develop, eventually turning black and pustulant.

Many of the infected died, usually within a few days of the first appearance of plague symptoms. In the early modern period in Venice, even with all the precautions and treatments, only about a quarter of the people who were sent to the pesthouse islands recovered and returned home.

Precautions Against the Pestilence

Venice’s Health Office, part of the city’s Provveditori alla Sanità, was established around 1490 in San Marco, with its seat near what is now the Public Gardens. This government office was responsible for instituting city-wide measures against contagion.

The first line of defense was to prevent the spread of disease. Throughout the Middle Ages, this might entail simply boarding up the windows and doors of those infected’s homes, preventing the spread of contagion but also ensuring a certain death sentence for those behind the cross-marked doors. By the sixteenth century, if someone showed signs of the disease, a doctor and a parish priest would be dispatched to question everyone in the house. As depicted in The Painter’s Apprentice, the infected and their families would then be boarded onto ferries and sent to the pesthouses in the lagoon islands.

Merchant ships coming into port might be held in quarantine for up to forty days in the Venetian lagoon before embarking. Sentries in the tower of the Piazza San Marco documented the comings and goings of these ships on a daily basis. Galleys were sometimes directed to the Lazzaretto Nuovo in order to unload goods for airing out and fumigation before they were allowed to be brought into the storehouses of the city.

In the pesthouses, patients were submitted to a variety of treatments, especially lancing of buboes and bloodletting, a mainstay of pre-modern medicine. In addition, caregivers experimented with a dizzying array of oils, ointments, syrups, pills, and concoctions containing everything from extracts of pearl to rosewater, poppy, and urine. A sixteenth-century Venetian notary described daily life in the pesthouse as nothing less than “Hell itself,” with patients three and four to a bed.

Probably the best advice for anyone in sixteenth-century Venice trying to avoid the plague was a popular saying: “Flee quickly, stay long, and return slowly.” 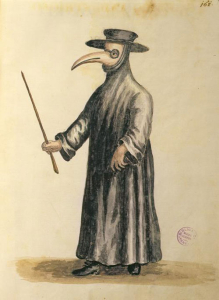 Around 1630 (more than a century after the story of The Painter’s Apprentice), a French physician named Charles de Lorme (1584-1678) pioneered a sinister-looking, beaked mask that was believed to protect physicians from contracting the pestilence from their patients. Part of the reason it was believed to be effective is that the doctor could stuff the beak full of herbs thought to ward off disease. Today, it’s one of the most popular masks made in Venice. You can read more about the history of the plague doctor mask here.

And if all else fails, call in the big guns…

San Rocco (also known as Saint Roch) was an early fourteenth-century saint who, according to legend, was born with a red, cross-shaped birthmark on his breast and healed many plague victims across Italy with the touch of his hand.

Naturally, San Rocco became the patron saint of plague-sufferers. The highly coveted relics of the saint came into Venetian possession in the fifteenth century. The Church of San Rocco was built by Bartolomeo Bon the Younger between 1489 and 1508 (just before the setting of The Painter’s Apprentice), though it was substantially altered in the eighteenth century.

The Scuola Grande di San Rocco, adjacent to the church in the sestiere of San Polo, was a confraternity founded in the fifteenth century to assist citizens during plague outbreaks. It is famous for its paintings by Tintoretto.

The church plays a role in The Painter’s Apprentice, when Maria and Zenobia meet at a midnight plague vigil there.

Richard John Palmer, The Control of Plague in Venice and Northern Italy, 1348-1600. Dissertation, University of Kent, 1978.