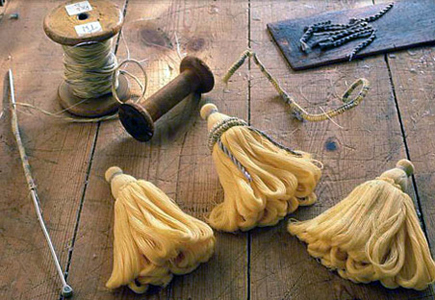 Only in Paris… I know of no other place on Earth where frog’s legs can be turned into a delicacy, where silkworm cocoons can be spun into robes befitting the Sun King, and where something as banal as a tassel can be transformed into a masterpiece.

It’s a combination of inspired artisanship and an undeniable urge to embellish that makes passementerie so purely Parisian. The term passementerie encompasses a broad range of trims for interior decoration, from tassels to multicolored fringe, curtain tie-backs, and other ornate minutiae.

Passementerie stands at the heart of a long tradition of embellishment among Parisian craftspeople. Through the centuries, Paris has put its greatest décorateurs to work decorating buildings, furniture, and interiors with style and flair. The French monarchy and noble classes kept the city’s artisans busy churning out deluxe interior fabrics and table settings, prestigious coaches, along with shimmering jewelry, lace collars and cuffs, custom shoes, and powdered wigs to adorn themselves as fancifully as their abodes. They established some of France’s most famous manufactures—large-scale artisanal enterprises specializing in interior trappings from Sèvres porcelain to Gobelins tapestries. These trades reached their zenith in the 18th century, when craftspeople fed a nearly insatiable appetite for covering every square inch of noble residences with ornate wall and ceiling moldings, bronze sconces and gilded chandeliers, silk and tapestry upholstery, and of course, fine furniture embellished with elegant fabrics, fancy tassels and trims.

It’s no wonder that this community of specialized craftspeople endured—even outlasting the monarchy—to make Paris a world capital of interior design and furnishings. The industrial revolution of the 18th and19th centuries ushered in machines capable of manufacturing passementerie on a large scale. Today, however, a handful of artisan establishments across the city, and north into the Ile-de-France and Picardy regions, carry on the tradition of making passementerie, in whole or in part, by hand. A variety of specialized looms, hooks, and other small hand tools help create a long list of stitches and cording, each with its own complex terminology.

Some of today’s best artisan passementiers are clustered in the Bastille district of southeastern Paris. In the Middle Ages, this area of town was home to the furniture trade guilds: cabinet-makers, joiners, metalworkers, and specialists in inlay and marquetry. Today, though undergoing gentrification, the area retains some of the flavor of an old-fashioned working-class district, with hole-in-the-wall workshops that transport visitors light years away from the posh avenues of the rest of the Right Bank.

Intrepid treasure-hunters might locate special antique examples of Parisian passementerie at the city’s two largest weekend antiques markets, Les Marchés aux Puces de Saint-Ouen, on the northern outskirts of Paris; and Les Marchés aux Puces de la Porte de Vanves, on the city’s southern edge. If you opt for an antique, be sure to check the condition carefully, since textiles can be fragile if not conserved in a controlled interior environment.

Whether you buy an antique piece or a tassel hot off the loom, you may be surprised at the high prices of these little wonders, a measure of their uniqueness and the labor involved in crafting them. On my last trip to Paris, I spent just over a hundred euro for three yards of tassel trim from an artisan passementier. Still, passementerie makes a fantastic choice for a typically Parisian souvenir that is easily portable and won’t break in your suitcase. When you get home, attach it to a doorknob, a chair, or a chandelier, an easy trick for bringing a distinctly French accent to your home, from the world’s undisputed capital of embellishment. Indeed, the key to authentic Parisian style is all in the details.

Read more about French passementerie in my guide, Made in France. The free companion guide, Artisans of France, leads you to the best places to find authentic passementiers in Paris and beyond. Read on… 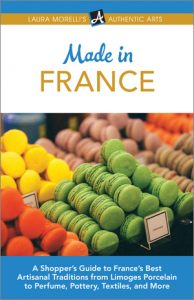 Have you found a treasure of trims and tassels in France? Drop a comment below!