Ravenna, Italy: What You Should Know About Its Mosaics

Ravenna, Italy: What You Should Know About Its Mosaics 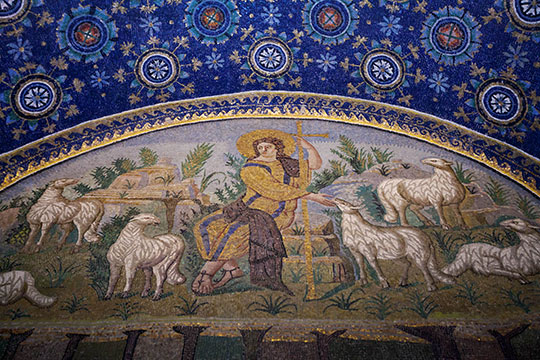 The 300s and 400s CE were a time of great political and social upheaval across the Mediterranean, as the balance of power shifted away from Rome and to the Byzantine empire. Ravenna, on the eastern Adriatic coast of the Italian peninsula, was strategically placed. In 402, as Rome fell into a period of chaos, Ravenna became the capital for the western Roman emperor.

Wealthy and imperial patronage in Ravenna made possible several important buildings with breathtaking mosaics, including the Mausoleum of Galla Placidia (ca. 425-426), the church of San Vitale (ca. 520-547), and the basilica of Sant’Apollinare Nuovo (6th-9th centuries).

A more eastern aesthetic characterizes the mosaics completed in Ravenna during this early period. Elegant, slender, flattened figures on a shallow spatial plane stare out with huge, staring eyes. Flat, deeply hued decorative schemes take over entire wall, ceiling, and vault surfaces. In these forms the medieval visual vocabulary takes form, their more abstract modes better able to convey ideas about spirituality, earthly and heavenly hierarchies, and the divine order of the universe.

Have you discovered the historic mosaics of Ravenna? Drop a comment below. I love to hear your stories!