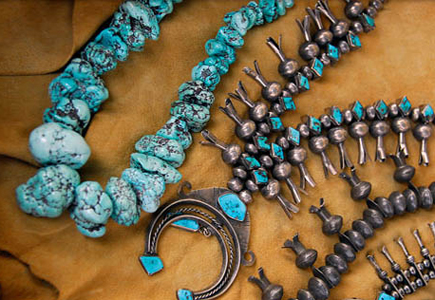 The wrinkled man, shiny braids reaching down his back, is dripping with turquoise jewelry. Each of his fingers bears a blue chunk set in silver, and at least a dozen strands of blue and green beads hang from his neck. “You can’t wear just one,” he smiles, handing me a few to try.

His is just one of many blankets spread beneath the arcades of the Palace of the Governors in Santa Fe, New Mexico. Jewelers, potters, and carvers display their wares in the shade along the city’s main square. Among the artisans clustered here, this elderly Navajo jewelry maker stands out to me—not only for his beautiful work, but for his palpable passion for the blue mineral that has become a symbol of Native American craftsmanship.

Turquoise is a mineral created in a natural process that is still not completely understood. Water seeping through porous rock interacts with copper, aluminum, and iron, over time creating a striking range of dark and light blues, greens, grays, yellows, and even white. For many centuries, Native Americans pulled turquoise from the earth using antlers, horns, hatchets, and other makeshift tools. Among a list of valued stones, minerals, and shells, turquoise held pride of place. Native Americans traded it for other objects, used it as currency, and transformed it into beads, jewelry, and ceremonial objects valued for their intrinsic beauty. A complex mythology developed about turquoise. It was thought to protect people from illness and bring luck and rain. Certain tribes developed their own distinctive creations with turquoise. For example, artisans from Santo Domingo Pueblo, in northern New Mexico, developed a class of jewelry called heishi, characterized by turquoise beads shaped like hockey pucks stacked closely together and strung in long strands.

When Spanish conquistadors arrived in the region in the 1500s, they considered turquoise worthless, and searched instead—fruitlessly—for gold. The Spanish introduced silversmithing to Native Americans, who quickly realized the potential of marrying the shiny metal with their beloved blue mineral. Originally Native Americans melted down Mexican pesos and American silver dollars for their silver content, and later, in the 20th century, moved to sheet silver. The Hopi, clustered in northeastern Arizona, perfected several silver techniques that have resulted in distinctive designs. However, few have joined silver with turquoise as successfully as the Navajo. Some Navajo jewelry designs are now considered classics. The most recognizable is the squash blossom necklace, which features a downward-facing horseshoe called a naja, usually encrusted with turquoise.

Jewelry dealers generally refer to turquoise by the name of the mine from which it originated, as turquoise from each place can be recognized by distinctive colors and veining patterns. The so-called Turquoise Trail, between Albuquerque and Santa Fe, New Mexico, once held many turquoise deposits. Unfortunately, many of the historic turquoise mines of the Southwest have been depleted, although the Kingman mine has reopened and is one of the best sources of American turquoise today. If you want a piece pulled from one of the other well-known historical mines of the Southwest—Orvil Jack, Cerrillos, or Sleeping Beauty, for example—you’ll have to buy an antique, or have the old turquoise reworked into a new piece. Many native jewelry makers rely on personal stashes of turquoise collected from antique pieces, or they may use turquoise imported from overseas.

Today there are five grades of turquoise on the market: natural, stabilized, treated, reconstituted, and imitation. Turquoise is inherently fragile, and most pieces have been treated with clear or colored epoxy to harden them. Natural turquoise that needs only be polished and set into a necklace represents a miniscule percentage of the pieces on today’s market. In fact, natural, untreated turquoise is even rarer than diamonds.

Shopping for turquoise jewelry across New Mexico and Arizona can be overwhelming for the sheer volume and selection. Beautiful contemporary creations incorporate other minerals, stones, and gems from coral to pearls. If you choose a traditional Native American design, make sure you buy something authentic. Authenticity is a major issue not only for turquoise jewelry but all Native American crafts, since cheap knockoffs and fakes sold across the Southwest take millions of dollars of revenue from native artisans. The Indian Arts and Crafts Act can make it a felony to sell imitations billed as “authentic” Native American. The term “Indian handmade” means that a work has been created entirely by hand by a Native American artisan. “Indian crafted” means that Native American craftspeople have been involved in producing the item, but not necessarily in designing it.

Just as you would when buying diamonds and other precious gems, stick to a reputable dealer who will provide details about the artisan and grade of turquoise in writing. Tribal co-ops, like the Navajo Arts & Crafts Enterprise, with a handful of locations in New Mexico and Arizona, are an excellent bet for finding authentic pieces. The Santa Fe Indian Market, which takes place each August, is one of the best opportunities to interact with some of the region’s most skilled masters of this enchanting blue mineral so synonymous with the American Southwest.