The Ancient Art of Chinese Silk

The Ancient Art of Chinese Silk 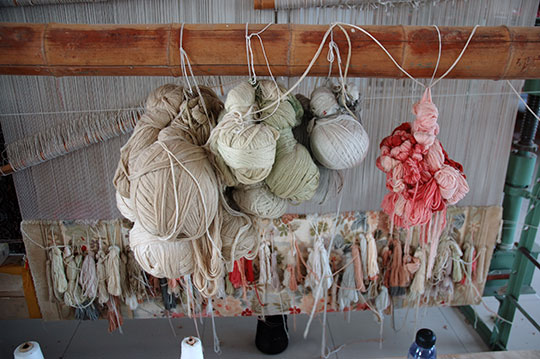 With the flick of a cigarette lighter, a Shanghai merchant sets the fringe of a silk scarf ablaze. My jaw drops as the fringe singes, then disintegrates into a tiny smoldering pile of fine ash. The merchant smiles. Yes, I know the “burn test” is designed to amaze tourists and differentiate authentic silks from plastic-smelling synthetic threads that curl or melt when burned. Still, it’s impressive that even in China—a country known for mass production—some things remain provably real.

Silk-making traces its roots to prehistoric China. For many centuries the Chinese closely guarded the secrets of their laborious craft. As China’s main currency, silk was used to pay taxes, fines, and wages, and even to buy public office. Silk ceremonies played an important role in imperial culture. A host of Buddhist deities associated with silk and silk-making received offerings at special altars reserved for them. The Silk Road—a well-trodden system of ancient trade routes, many over treacherous terrain—brought silk to Westerners hungry for these exotic luxuries. Many observers consider silk to be one of China’s greatest contributions to world civilization.

How silk is made

Incongruously, this luxurious fabric begins with a worm, or more accurately, a caterpillar of the species Bombyx mori. The process starts with the careful cultivation of silkworms, along with the mulberry bushes and trees that form both their habitat and diet. Sericulturists spread the sillkworms and fresh mulberry leaves on large trays stacked in special houses. There the silkworms produce a protein filament tightly wound into cocoons. Once completed, the cocoons are sorted and momentarily steamed, which kills the chrysalis, then boiled, which helps loosen the cocoon’s delicate filaments. Then, the filaments are “thrown,” a process in which several strands are twisted together to yield a thicker, stronger thread. The threads can then be dyed, making them ready to be woven or used in embroidery. The Chinese invented specific types of looms, as well as a host of specialized handmade implements for weaving and finishing silks. The woven silk is wound into bolts of fabric ready to use in clothing, upholstery, and many other products.

From the start, Chinese silk production was a well-honed group activity, with many specialists involved in the cultivation, harvesting, sorting, spinning, weaving, and embroidering phases. Hand-embroidery developed as a craft naturally associated with silk, engendering a plethora of regional embroidery styles, the most famous of which emerged in Hunan, Guangdong, and Sichuan provinces, and in the city of Suzhou. There are more Chinese words to describe silk embroidery techniques and styles than there are English ones to supply translations.

Today, the silk-making process is largely a blend of handmade and industrial production, and still employs many specialists. Most silk factories utilize machines to sort and boil the cocoons, and to throw and reel their delicate threads. However, even with China’s reputation for automation, the country still boasts many excellent sericulturists who follow centuries-old techniques, hand-weavers who use traditional looms, and embroiderers who continue to reproduce by hand the traditional stitches of their ancestors. China remains the world’s largest silk exporter.

How to select silk

Many travelers to China are overwhelmed by the choices for silk fabrics, garments, and smaller accessories. The number of silk shops in Shanghai and Beijing alone is staggering. For the most authentic shopping experience, head to one of the regions known for silk. The city of Suzhou, west of Shanghai, for example, developed a reputation as a silk capital because its silk-makers turned out imperial garments from the seventh to the early 20th centuries under the Tang, Song, Ming, and Qing dynasties. At the Suzhou Silk Museum, you can view silks dating back to the seventh century, and train your eye for the many silk shops and factories that lure travelers across the region. China’s larger cities boast interesting fabric markets such as the boisterous Dongjiadu Fabric Market (now called the South Bund Fabric Market) in Shanghai, where tailors craft custom garments.

Good buys include traditionally styled garments like the qipao, a high-collared gown with a slender cut. To judge quality, examine the edges and stitching carefully. How closely are the silk threads woven? Are the edges even and unfrayed? If embroidered, how fine and skillful is the stitching? Are the design and colors traditional? Prices begin at 45-55 yuan (roughly U.S. $6-7) for one meter of silk, and climb to several thousand yuan for unusual or antique pieces. One of China’s best shopping experiences is commissioning a tailor to create a custom silk garment. For a surprisingly reasonable price, you can select a fabric and hire a tailor to create a shirt or entire suit—and come home with a souvenir that is truly a reflection of China’s history.

Have you discovered a silk treasure in China? Drop a comment below. I love to hear your stories!