The Venetian Origins of Sequins

The Venetian Origins of Sequins 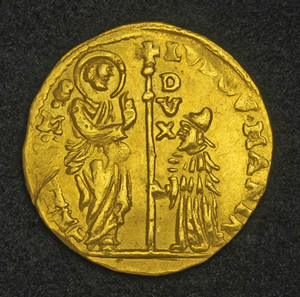 The Venetian Republic began minting a particular type of gold coin called a ducat in the thirteenth century. Venetian ducats were highly valued and actively exchanged in a widespread area across the Mediterranean.

The ducat soon came to be referred to as a zecchino after the name of the Venetian mint, the zecca. Venetian zecchini changed with each ruling doge, and can be dated by analyzing the iconography on each coin.

Eventually it became fashionable for women across the Mediterranean world to stitch Venetian zecchini and other coins to their clothing and headdresses. Variations for the word zecchino–along with a similar Arabic word, sikka–ultimately evolved into sequin to describe any shiny circular adornment used on clothing.

Have you discovered an interesting historical tidbit about Venice? Drop a comment below. I love to hear your stories!