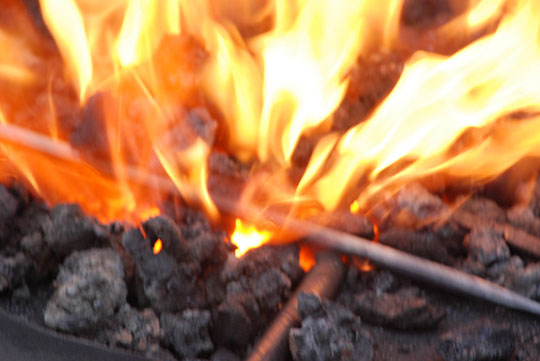 How many blacksmiths do you know?

Most people can’t name one. It’s amazing to realize that little more than 100 years ago, blacksmiths were considered so vital—not only in the Southwest but all over America and around the world—that life would have been unimaginable without one. Everyone needed something the blacksmith made: tools, implements, hardware, gates, railings, and other metal objects used for practical living.

In New Mexico, the wrought iron tradition traces its roots to the earliest blacksmiths who traveled with settlers from Mexico along the Rio Grande in the late 1500s and early 1600s. In these nascent communities, artisans set up workshops to create furniture, pottery, tools, and other necessities of daily life. In the colonial period, these cultures were entirely self-dependent. Everything they needed to live had to be crafted by hand—not only wrought iron but also clothes and table linens, saddles and horse tack, crockery for food and cooking, religious objects, and more. Following the example of their Spanish ancestors, these artisans organized themselves into specialized guilds. They brought with them implements, tools, hardware, and other small pieces to trade with the Pueblo Indians, who valued these finely wrought metal objects.

The American Southwest is not particularly rich in iron ore, but the blacksmith’s craft was so critical in pre-industrial society that wrought iron craft flourished in early New Mexico nonetheless. The Spanish exported iron in bars or sheets to their colonies in the New World, in part as a way to ensure the strength of their own country’s important iron industry. Hispanic blacksmiths passed on their trade not only to their children but also to Native Americans. As part of the Spanish king’s colonial strategy, craftspeople were instructed to teach Native Americans their trades, and by the 17th century blacksmith shops were well established across the Southwest.

Because of the scant quantities of available iron, colonial blacksmiths crafted smaller and more modest implements, furniture, and hardware compared with larger and more elaborate examples produced by their relatives in Mexico. Living in the harsh new land, early Hispanic blacksmiths adapted their work, applying a distinctive vocabulary of forms to craft objects of rustic beauty. Craftsmen toned down the ornate, curvilinear baroque forms they knew from Spanish and Mexican examples of the 1600s and 1700s. Out of these modifications, these craftspeople forged a distinctive regional style that began to stand on its own with bold lines and rustic simplicity.

The earliest interiors of the Southwest looked very similar to those of Spain and Mexico of the same era—understated, sparse spaces that relied on a few important pieces of furniture pushed back against the wall. Wrought iron formed an important decorative element in these distinctive interiors. Of course, wrought iron was used for large-scale architectural works such as gates for churches, grand entrances to homes, and to communities walled with adobe. Southwestern blacksmiths also excelled at works on a smaller scale, especially elaborate crosses, devotional objects, and church ornamentation.

Like many traditional trades, over the course of the 19th century, hand-wrought iron was supplanted by mass-produced, or at least more commercialized, products. In the 1970s, a revival of interest in craft ensured that many of these traditions would not only be saved but would also flourish. Luckily, a handful of dedicated wrought iron artisans still use techniques that have changed little over its many centuries of history. Even today, traditional blacksmiths rely on the same tools used for thousands of years—a furnace or forge, an anvil to use as a base for shaping iron works, and a variety of hammers and chisels to cut, flatten, or fashion a particular form. No longer relied upon for the basic tools of living, blacksmiths now ply their trade for decorative and custom work.

What to consider before buying

Whether you buy an antique or reproduction piece of Southwestern wrought iron, you will likely benefit from spending time in the region’s excellent museums, like the Museum of Spanish Colonial Art in Santa Fe (750 Camino Lejo, 505/982-2226, spanishcolonial.org), one of the few with a sizeable collection of Spanish Colonial wrought iron. Once you’ve filled your mind with these examples from the past, you’ll be better prepared to scour the shops for an authentic wrought iron treasure.

If you would like to pick up a piece of quality wrought iron, buy from a reputable dealer, or better yet, directly from the artisan. Although they no longer operate in guilds, some traditional wrought iron enterprises across the Southwest remain family affairs. Parents pass the torch of tradition to their children and grandchildren, perpetuating the techniques and the spirit of these old works. It is not always possible to watch these artisans work, as blacksmithing requires space, with studios situated away from the shopping zones of Albuquerque, Santa Fe, Taos, Tucson, and Phoenix.

One of the Southwest’s best wrought iron shopping opportunities is the treasure-packed Spanish Market in Santa Fe (taking place in July and December in Santa Fe Plaza, spanishmarket.org), where you can rub elbows with blacksmiths who do not run retail spaces of their own and whose work you might not find elsewhere.

Spirit of the Southwest

For the most authentic purchase, stick to characteristic, traditional pieces like crosses and other devotional works. Large-scale works, like a door or window screen called a reja, also are traditional choices. Wrought iron is a proven way to add character and a sense of Southwestern taste. A number of today’s interior designers use wrought iron in new contexts, whether as a headboard or as wall art.

Many of the region’s artisans jump at the chance to design custom pieces—a sure way to add a distinctive and authentic Southwestern accent to your home. Wrought iron crafts are a relatively good value, especially when you consider the ease with which you can commission a custom piece such as a gate or furniture hardware. For smaller budgets, antique hinges, drawer pulls, and other small forged works can also be picked up cheaply from antiques dealers and markets across the Southwest, an easy trick for bringing Southwestern style into your home.

Have you discovered a wrought iron treasure in your travels? Drop a comment below. I love to hear your stories!