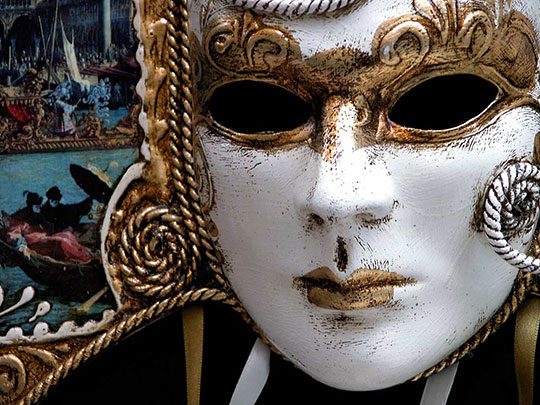 No one knows exactly when, how, or why Venetians began to wear masks in public. Some historians attribute the origin of masquerade celebrations to festivities surrounding the Venetian Republic’s conquest of lands in the eastern Mediterranean, but there is little evidence to help us understand the original motivations behind this curious tradition.

The earliest accounts of Venetian masks are laws stating what Venetians could not do while wearing one. A law of 1268 forbade masked people from playing certain games. Another thirteenth-century law prohibited masked people from gambling. In 1339, the Republic’s lawmakers specifically outlawed vulgar disguises and visiting convents while wearing a mask. As is the case with all laws, we can only assume that they existed because people were doing whatever was forbidden. 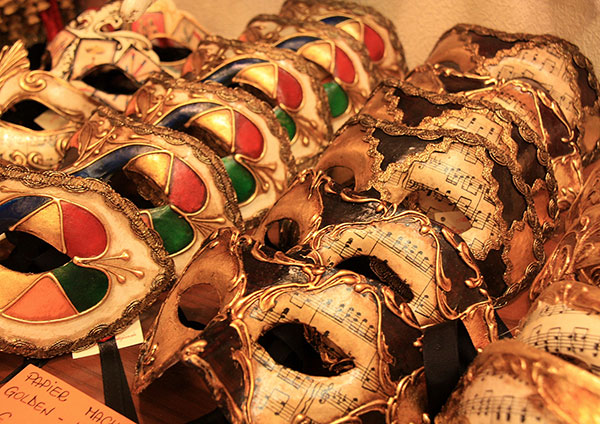 During the Middle Ages, Venetian mask makers (singular mascarer or plural mascareri) were organized into guilds or arti. Their statutes, recorded in 1436, placed mask makers under the same regulations as painters. The statutes set forth strict rules about the education and advancement of apprentices and journeymen, and stipulated the conditions under which masks could be produced and sold in the city.

From these medieval accounts, we learn that masks were associated with Venetian Carnival. Carnival is a traditional annual festival in Catholic countries that takes place during the ten days leading up to Lent. Lent being a time of abstinence (the origin of the word carnival is thought to connote “relief from meat”), the days leading up to it entailed the opposite: overindulgence in food, drink, and merry-making. The city held its first Carnival in the eleventh century. Carnival celebrations extended through the city streets and squares, with dancers, acrobats, jesters, and other street entertainers. This free-for-all celebration included parades, balls, practical jokes, street music, and general revelry.

Under the laws of the Republic, Venetians were allowed to wear masks starting with Santo Stefano on December 26 and leading up to the beginning of Carnival on Shrove Tuesday (also called Fat Tuesday), which usually falls in February. In these early centuries, the official period of mask wearing was the one time of year when social divisions were blurred; behind the mask it was impossible to tell aristocracy from the lower classes. Scholars believe that mask wearing allowed people some relief from the rigidity of Venetian class divisions. By the seventeenth century, Carnival celebrations were not the only setting for the wearing of masks. Venetians also wore masks during state ceremonies, at society balls, at opera and theater performances, and at other public events.

While today we think of Venetian Carnival masks as opulent, even ostentatious, the early ones were simple affairs, little more than unadorned faceplates of white or black. By the time Venetian Carnival reached it zenith in the sixteenth century, masks had become more elaborate along with the costumes and jewelry for which Venetians were world-renowned. In fact, masks are inextricably linked to the history of costume in Venice. In the sixteenth and seventeenth centuries, costume renters ran successful businesses, outfitting their clients with sumptuous fabrics adored with tassels, trims, beads, feathers, ruffles, jewels, pearls, and other finery. As the theater genre of the Commedia dell’Arte gained popularity, many Venetian masks emulated popular characters from the stage.

When the Republic fell at the end of the eighteenth century, the ruling king of Austria outlawed Carnival celebrations in Venice, specifically banning the wearing of masks. The art of Venetian mask making fell into a lull until Carnival was revived in the late 1970s; the efforts of just a few local mask makers renewed the tradition. At that time, the Italian government sought to boost tourism and made the Carnevale di Venezia the focus of their efforts. The number of mask makers grew quickly, and today there is a group of notable mask makers carrying on the traditional techniques.

Today, it is nearly impossible to find a street in Venice without at least one shop selling masks. At Carnival time, several private balls including the exclusive Ballo del Doge cater to dignitaries who want to recreate the magic of Venetian Carnival, including the wearing of traditional masks. The Venetian Carnival attracts hordes of international visitors, and the tradition of mask making continues in part thanks to today’s lively Venetian tourist trade.