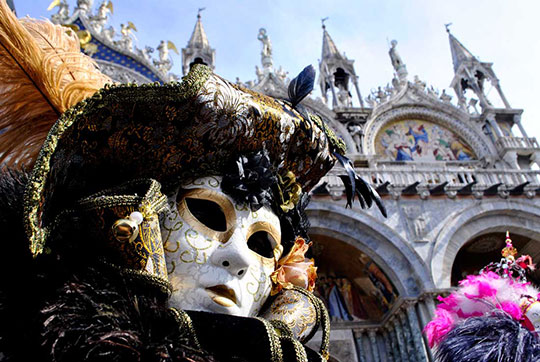 Although the earliest Venetian Carnival masks were simple affairs—a plain white or black molded form with cutouts for the eyes—eventually a range of archetypal masks developed. By the eighteenth century, some of the most commonly worn mask types were based on characters from the Commedia dell’Arte, a popular theater genre whose stock characters would have been immediately recognizable to an eighteenth-century Venetian. These characters included a host of heroes, clowns, patricians, and servants. Most of the masks based on these stage characters were half-masks, since the mouth needed to remain free so that the actor could be heard.

The baùta is the quintessential Venetian mask, worn historically not only at Carnival time but any time a Venetian citizen wished to remain anonymous, such as when he may have been involved in important law-making or political processes in the city. The simplest of the traditional Venetian mask types, the baùta is a stark faceplate traditionally paired with a full-length black or red hooded cloak called a tabàrp (or tabàrro), and a tricorn hat, as depicted in paintings and prints by the Venetian artist Pietro Longhi.

Most baùte were made of waxed papier-mâché and covered most of the face. The most prominent feature is a distinctive aquiline nose and no mouth. The lower part of the mask protruded outward to allow the mask wearer to breathe, talk, and eat while remaining disguised.

The moretta is thought to be of French origin, but it became a popular women’s mask in Venice by the seventeenth century. Usually made of black velvet, the moretta consists of a simple, oval faceplate with cutouts for the eyes but not the nose or mouth. Women secured the mask to their faces by holding a button on the inside of the moretta between their teeth! Understandably, the popularity of this mask was short-lived.

The volto is meant to be a generic face in the crowd; the word volto means “face” in Italian. The volto consists of a simple, white oval with cutouts for the eyes and nose. Traditionally, the volto was worn by Venetian citizens at Carnival time and for important feast days and events, complemented by more individualized costumes.

The Commedia dell’Arte emerged as a theater style in Italy in the second half of the sixteenth century, and enjoyed enormous popularity over the next two centuries. The lively stage productions took place in temporary outdoor venues, and featured humorous sketches based on stereotypical, stock characters whose roles stayed consistent even though the stories changed. Audiences recognized these stock social types as parodies of characters from various walks of life. The Commedia dell’Arte found it perfect audience among Venetians, with their love of public spectacle, costumes, and masks.

In the Commedia dell’Arte, Colombina played the role of maidservant. The Colombina is a half-mask that covers the forehead down to the cheeks, but leaves the mouth revealed. Originally, it would have been held up to the face by a baton in the hand. The Colombina is often decorated with more feminine flourishes, from gilding to gems and feathers, but both men and women may wear it.

“Big Pants” (sometimes called Il Magnifico) is a classic stage character who plays the role of father figure or another strong male lead. The Pantalone mask is characterized by a large nose, high brow, and slanted eyes.

Of the Commedia dell’Arte characters, Arlecchino, or Harlequin, is the most famous. On stage, Arlecchino appeared frequently with Pantalone as a dim-witted, mischievous, and comical counterpoint to the strong male lead. The Arlecchino mask is typically dark and characterized by a snub nose and protruding forehead. Arlecchino’s costume is immediately recognizable for its familiar diamond-shaped patterning.

The character of Il Dottore is a rich, pompous know-it-all, quick to share his opinions with the other stage characters. His mask typically covers only the forehead and nose, and accompanies a bulky costume to suggest his gluttonous habits.

Zanni is another servant character of the Commedia dell’Arte, an unlearned, meddling, and comic personage whose mask is characterized by a low forehead and elongated nose, not to be confused with the Plague Doctor.