Venetian Fashion in the 16th Century

Costume-renters were some of the most prosperous business owners in 16th-century Venice. That’s because Venetians with means did not want to be seen wearing the same thing twice. With the help of the costume renter, they could enjoy an ever-changing array of hats, tights, doublets, dresses, and shoes.

And here’s what people wanted.

First, let’s address the elephant in the room.

Venetian chopines–platform shoes worn by wealthy women–were at the height (literally) of fashion in the 16th century. These tall shoes originated in the Near East, and probably made their way to Italy through Spain, where tall shoes made with cork soles were popular at the same time.

Spanish noblewomen tended to wear dresses at a length that would allow the shoes to show, and the shoes themselves were made with luxury materials. By contrast, in Venice, women tended to bring the length of the dress to the floor, so that their chopines were rarely in view, only meant to give the illusion of height and allow for more display of luxurious fabric instead. In this regard, chopines functioned as a type of foundational garment: basically underwear.

As you might imagine, average Venetian citizens–artisans, shopkeepers, guildsmen, even house servants and boatmen–dressed more modestly than their patrician counterparts. 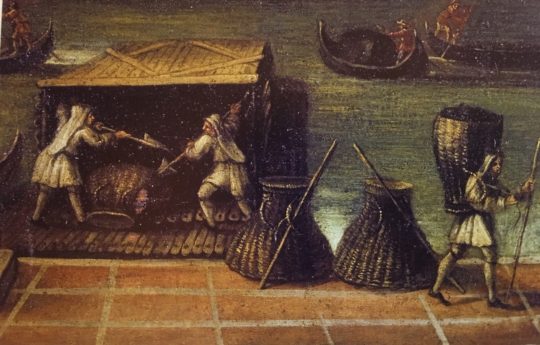 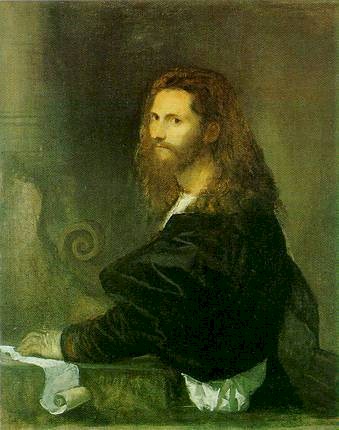 But still, it’s Venice. And Venetian things are… well, fancy. 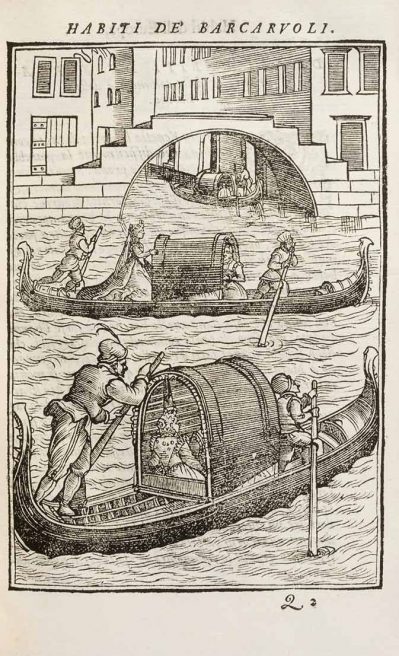 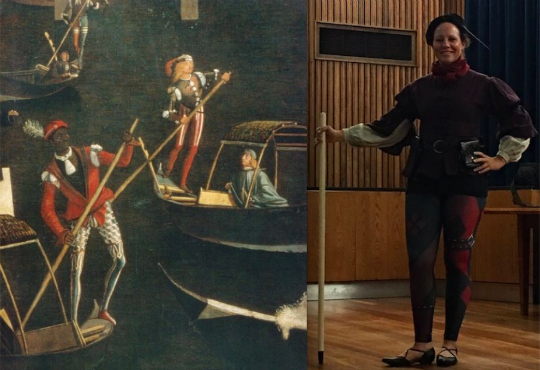 Cross-dressing isn’t part of my normal routine, but I played the role of a 15th-century gondolier for the costume pageant at the 2016 annual meeting of the Historical Novel Society in Oxford, England. And guess what? I won second place–ha ha! (Maybe I should do it more often?) Can you see the resemblance?
Vittore Carpaccio, Detail from the Miracles of the True Cross, ca. 1490, Gallerie dell’Accademia, Venice. 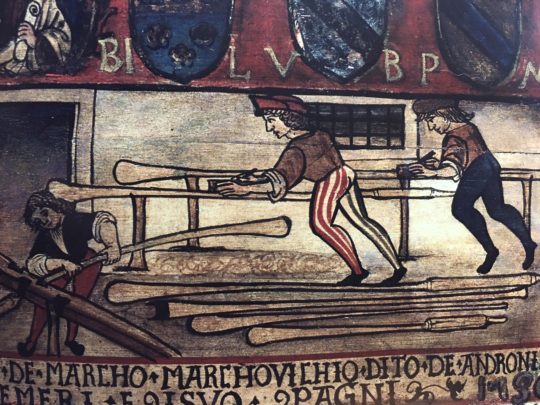 In the 16th century, Venice was a stage where those with means flaunted their material wealth in the form of textiles, jewels and accessories, ornamented boats, and other symbols. 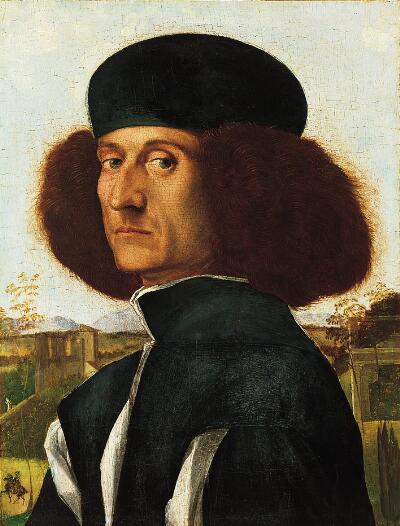 Vittore Carpaccio, Portrait of a Venetian Nobleman, 1510, Norton Simon Museum, Pasadena. This has to be one of my favorite portraits of all time. The hair! This gentleman appears as a character in my TED-Ed lesson, A History of the Venetian Gondola. Check it out.

Some Venetian stereotypes of the time were captured in a fascinating series of woodcuts by Christoph Krieger, published in a book by Cesare Vecellio called De gli habiti antichi et moderni di diversi parti del mondo (About Old and Modern Dress from Various Parts of the World). Vecellio was Titian’s cousin, and came from the mountainous region of Cadore to work with him some time before 1548. By 1570, Vecellio had set himself up as a successful publisher. At that time, Venice was the publishing capital of the world.

Jewelry and other adornments

Jewels and gems were highly prized in Renaissance Italy. Judging from dowry lists and household inventories of wealthy Venetians, we learn that some women held collections of dozens, even hundreds of pearls, emeralds, garnets, and other precious stones. They were fixed into gold fittings, and held in private stashes and safes inside Venetian palazzi. Venetian courtesans were also famous for their collections of colorful, flashing baubles. 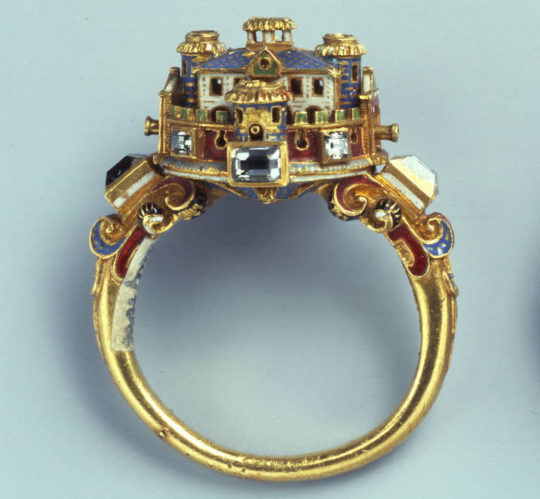 Across the Italian peninsula, Catholic authorities instituted sweeping sumptuary laws designed to curb sinfully ostentatious displays. Wearing too much jewelry was seen as a particularly egregious offense, but it was not the only one. In 1562, Venetian authorities decreed that all gondolas be painted black, and we are left to imagine how they must have been ornamented before then.

In the face of these sumptuary laws, some wealthy Venetians chose to pay the fines, a small price to keep up appearances.

During the sixteenth century, a curious “horned hairdo” took hold of Venice. The style involved piling the hair into two points at the brow, often studded with pearls or golden threads. Combined with a fan-like lace collar, this fashion trend appears in many portraits of the era. 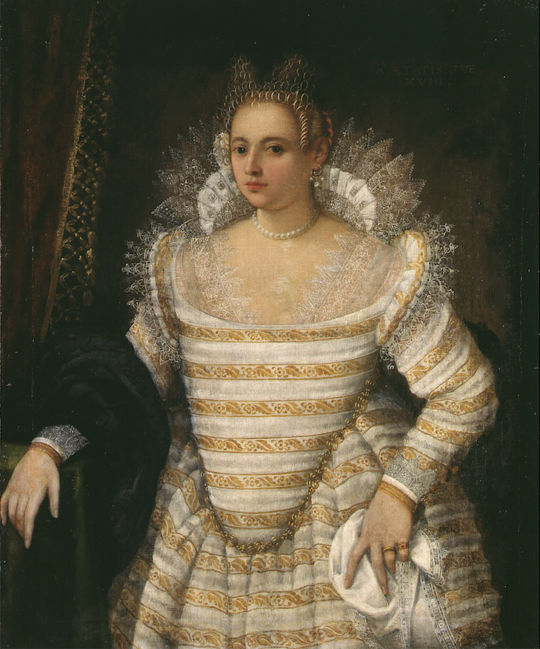 Blonde hair was also considered most beautiful, and Venetian women bleached their hair by sitting in the sun with it soaked in a concoction of lemon juice and urine. The result must have been lovely, but I imagine that you wouldn’t want to get too close.

Research is one of my favorite things about writing a book. I hope you’ll take the time to explore more of this behind-the-scenes section of my web site to learn historical tidbits related to The Gondola Maker.