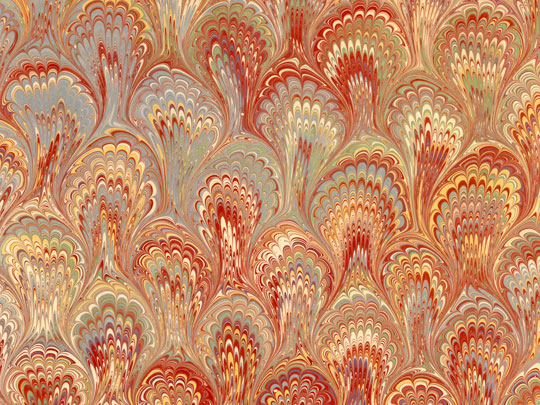 Venice claims an important position in the history of bookmaking and publishing. The city’s geographic position as a gateway to the East, its preeminence in international trade, and its place as a center for knowledge exchange and artisanship made the Venetian Republic a natural setting for large-scale bookmaking to take root. The legacy of Venetian paper was born.

Prior to Johann Gutenberg’s invention of moveable type in the 1450s, each and every book was handmade. Books were precious, expensive, and highly coveted, prized possessions of monasteries and learned collectors wealthy enough to purchase them. Parchment vellum was made in a laborious process of preparing sheepskin in the tanneries, and a parchment sheath was never discarded, only occasionally scraped down and reused in a new book. Traditional monastic scriptoria could no longer meet the exploding demand for new books that occurred over the course of the fifteenth century.

With the innovations in moveable type, engraving, book printing, and distribution by the late 1400s, Venice was poised to be a leader in this expanding trade. Bookbinding studios, or legatorie, are documented in Venice by the 1450s, and bookmakers enjoyed esteemed social status. One of the most influential publishers of the era was Aldus Manutius, whose legatoria in Venice typeset many scholarly books in Greek and Latin destined for scholars and universities all over Europe. A French-born engraver named Nicholas Jenson opened shop in Venice in 1470 after studying under Gutenberg and became an important figure in the history of type. Based on centuries-old, well-established trade routes, Venetian printers and publishers found easy distribution channels to the newly emerging booksellers across Europe.

Book production was a natural art for Venetians, who were already skilled at working with leather, pigments, and gold leaf. Knowledge of paper-making made its way from Asia to Europe during the Middle Ages. Venice, with its strategic location as the gateway to the East, was the natural place for this new art form to take root. From Venice, the tradition of decorative papers moved south to Florence, where it also flourished.

With the widespread use of moveable type instead of script, paper instead of vellum, and woodblock prints and engravings instead of hand-painted illuminations, the interior pages of books were dramatically transformed from their medieval predecessors. However, a book’s exterior, its binding, remained essentially the same as its medieval models. Often, the legatoria only bound a book once a patron purchased it, and therefore the binding was customized and could be as simple or as fancy as the book buyer’s budget and desire.

Early bookbinders discovered that when leather bindings came into direct contact with end papers, the result was discoloration and damage to the paper. They began facing the inside of the leather covers with hand-colored papers. This practice not only meant blank pages for creative and colorful paper displays, but also later the bookbinders realized they could reduce the amount of expensive leather they used in binding. Eventually, many bookbinders began using leather only for the spine, disguising the cover boards with colorful decorative papers.

The practice of “marbling” paper—decorating paper with colorful patterns that imitate marble veining—probably originated in China. By the fifteenth century these techniques had made their way across East and Central Asia. While the practice of using marbleized end papers was widespread in Germany and France by the seventeenth and eighteenth centuries, most Venetian and other Italian bookbinders used surprisingly little colored decoration, preferring plain, white end papers and foucusing on the leather binding of the book itself. By the mid-eighteenth century, several prominent Venetian bookmakers incorporated marbleized paper into their repertory of woodblock prints, copperplate engraving, leather binding, and other book production services.

The production of Venetian books involved specialists of several stripes—masters of leather, paper, engraving, printing, gilding, and other trades. Many famous Venetian painters, including Tiepolo and Canaletto, produced an enormous number of engravings and etchings during the middle of the eighteenth century, many of which were destined for bound books. Wealthy English travelers on the Grand Tour of Europe fueled demand for individual prints and books that contained prints by these well-regarded artists. These artists’ vedute—or views—of Venice served as precursors to modern-day postcards for these international visitors who wanted to take a piece of Venice home with them.

Have you discovered handmade paper in Venice? Drop a comment below. I love to hear your stories!