What to Bring Home from Sardinia

What to Bring Home from Sardinia

For people like me with an interest in cultural traditions, the island of Sardinia is one of Italy’s most fascinating spots.

In many ways, landing on Sardinia feels like stepping into an idyllic Arcadia that—as if by magic—has passed unnoticed by modern civilization. Left alone by invaders, untouched even by the Renaissance, Sardinia’s traditional crafts and ways of life seem to transcend time.

From sheep grazing in the scrub brush along rocky hills, to a sea so transparent it doesn’t seem real, to women crafting lace in the shadows of stucco homes, Sardinia feels like another world. 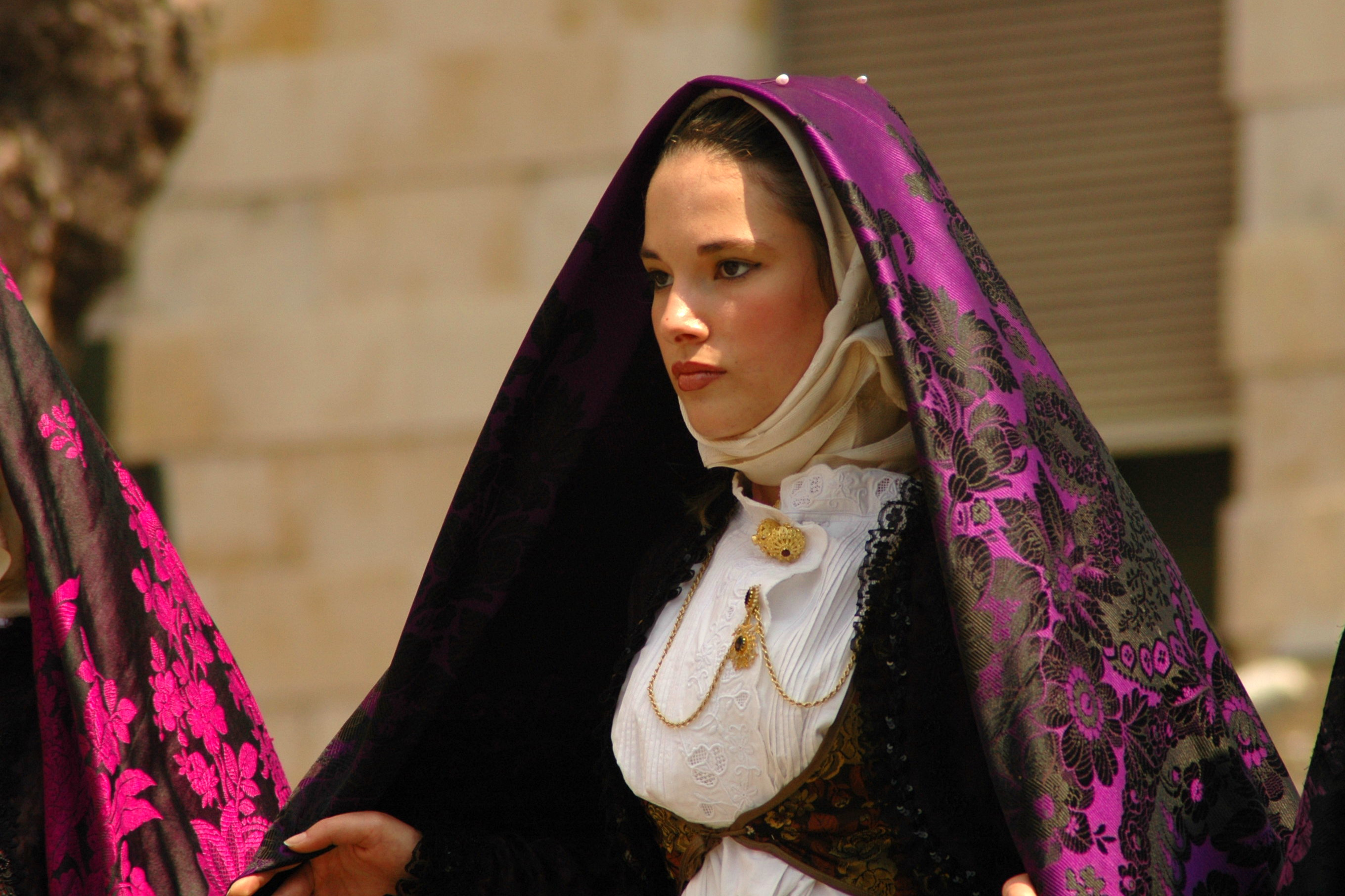 Since Paleolithic times, people have worked the land, fished its emerald seas, and made music and crafts on this island of stunning beauty. As an insular society, its people developed their own language and culture. Traditional crafts, including embroidery, metalwork, ceramics, wrought iron, and woodworking, follow practices used since antiquity.

No other region of Italy boasts so many costumes of diverse colors and fabrics. Each village preserves its own ceremonial dress lavishly covered with lace, gold, embroidery, and gems, which you can see if you attend one of the many festivals on the island. This love of ornament also extends to fabulously ornate gold filigree jewelry set with corals and pearls. Shawls, table linens, rugs, and other textiles with traditional designs decorate the rustic rural houses of the island.

Today, this mostly rural island boasts some of Italy’s most diverse linguistic, artistic, and musical traditions. Bring home one of Sardinia’s traditional crafts, and you will have picked up an authentic souvenir that is unique in Italy.

Here’s what to look for: 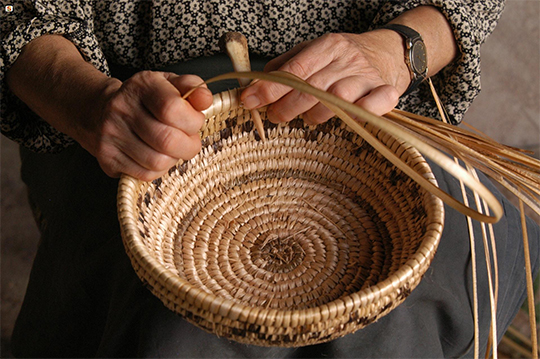 Sardinian basket-weaving, closely linked to textile production, remains an important art form. Woven baskets, mats, rugs, trays, and vessels of every sort meet the practical needs of gathering a harvest, scooping up fish, and transporting bread. They’re placed on floors, chairs, and tables throughout sparse, tidy Sardinian homes.Artisans weave rush, reeds, straw, willow, and just about any flexible vegetable material to craft these items. They also color the pieces with bright hues using natural plant dyes. The seaside town of Castelsardo, on Sardinia’s northern coast, remains a cen­ter of basket production. Most of the weavers work from home. 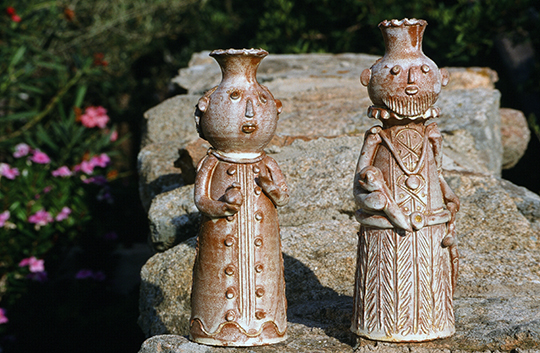 The ceramic traditions of Sardinia couldn’t be more different from those of the great ceramic centers of the Italian mainland—Faenza, and Deruta, for example—or even that of Sicily. Untouched by the classical spirit of the Renaissance, Sardinian ceramics boast the same indigenous forms that inspire the gold jewelry and textiles of the island.

The stylized birds, deer, and decorative motifs seem closer to the art of prehistory or the ancient Near East rather than to the classical tradition of the Italian mainland. Major ceramics centers include Oristano and Assemini, near Sardinia’s capital city of Cagliari. Small, utilitarian pottery, as well as whimsical pieces based on animal forms, make portable, affordable souvenirs. 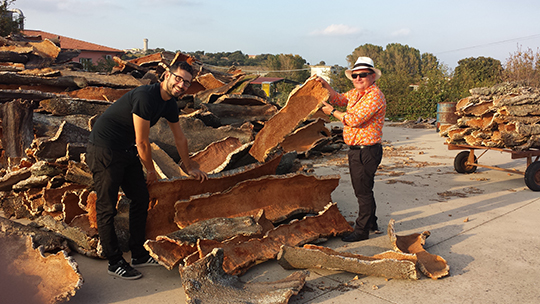 In the arid landscape around Calangianus, bark is pulled away from the lower trunks of gnarled trees that blanket the hillsides. Calangianus is Sardinia’s major cork production area. The processing of cork begins with stripping bark from the trees, a process that does not harm them. The bark is seasoned in vast outdoor vats for up to two years. Then the cork is boiled and disinfected, dried, cut, and packaged. A single sugherificio can produce hundreds of tappi per day, many destined for the great wine producers of Tuscany and Piemonte. Several dozen industrialized cork producers churn out wine corks, tappi, in breathtaking numbers. A few artisans also carve the material into frames, boxes, and even tea sets and jars. 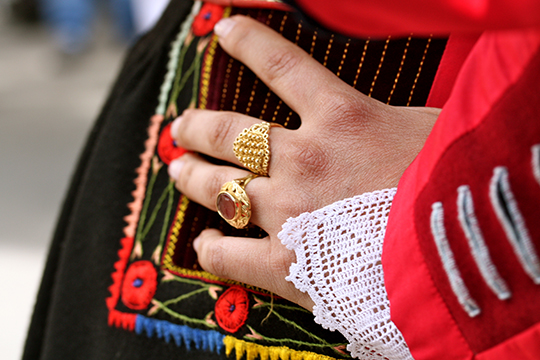 For centuries, Sardinia has been known as the “land of metal.” Silver and gold are abundant, worked with precious stones, including gems of the sea, coral, and pearls. Today, Sardinian craftspeople use the techniques of filigree (filigrana d’oro), embossing, casting, and welding to create unique brooches, pins, earrings, necklaces, chains, rings, religious objects, amulets, and a thousand other creations.

Traditionally, these ornate jewels adorned local costumes that varied widely from town to town. Artisans craft jewelry all over the island, but a large number of jewelers are concentrated in Cagliari. Alghero is the center of coral jewelry. Don’t miss the regional parades and fairs that take place year-round on Sardinia. It’s one of the best places to witness traditional costume and jewelry. 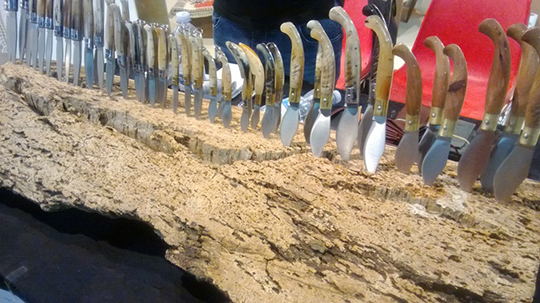 The Sardinian knife—a foldable, pocketknife-style instrument—has a long his­tory on the island. Traditionally, these knives were crafted with handles made from the horn of mountain goats that once inhabited the formidable mountains of central Sardinia. The towns of Santu Lussurgiuand Pattada have been centers for knife artisans for centuries. In fact, the word for knife in the Sardinian language is, simply, pattada. 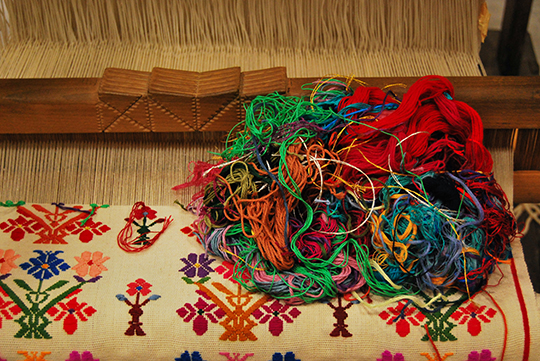 Until recent times, sheep outnumbered people on Sardinia, so it’s no wonder that wool products and textiles emerged as a key industry. For many centuries, coarse sheep’s wool has been hand-woven on ancient looms. Rugs, wall hangings, bed linens, church vestments, costumes, and even saddlebags for carrying the harvest on the back of a donkey have been made. The costumes of Sardinia are among the richest in the world, and each town boasts a unique tradition, so textiles are a major craft here.

Colors and dyes from the island’s indigenous plants, flowers, barks, and colored earth make striking geometric designs and stylized animal motifs. Today, there are concentrations of weavers in Dorgali, near Nuoro; Ittiri and Nule, in the province of Sassari; and Samugheo, in the province of Oristano. Look for local weavers’ coops—and occasionally an open door at a weaver’s home—in the provinces of Sassari and Oristano.