Writers’ Routines
Recently my kids and I went to see the Broadway musical, Matilda, which is based on Roald Dahl’s book. In preparation for the show we did some research on Dahl himself, and I came across this fantastic description of his writing routine captured by Dahl’s daughter Lucy: 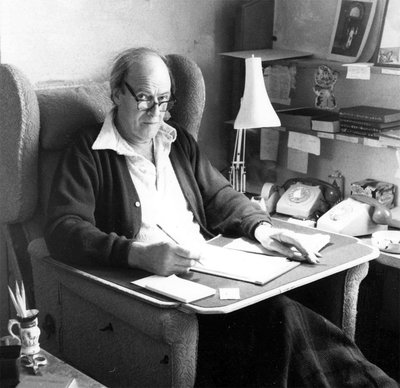 “His hut was a sacred place. … We were all allowed to go in there, but we only disturbed him when we absolutely needed to because he used to say that his hut was his nest. You would walk in and the smells were so familiar — that very old paper from filing cabinets. And he sat in his mother’s old armchair and then put his feet up on an old leather trunk, and then on top of that he would get into an old down sleeping bag that he would put his legs into to keep him warm.
He then had a board that he made that he would rest on the arms of the armchair as a desk table and on top of that he had cut some billiard felt that was glued on top of it, and it was slightly carved out for where his tummy was. When he sat down … the first thing he did was get a brush and brush the felt on his lap desk so it was all clean. The always had six pencils with an electric sharpener that he would sharpen at the beginning of each session. His work sessions were very strict–he worked from 10 until 12 every day and then again from 3 until 5 every day. And that was it. Even if there was nothing to write he would still, as he would say, “put his bottom on the chair.” (Story via NPR)

I just LOVE that Dahl wrote in a “writer’s hut” and that he had a place carved out of his writing board for his tummy! Ha ha! Writers’ routines are so individual and curious. A great reminder for all of us who write that we need to put our bottoms in the chair every day–no matter what kind of hut we are in!
As for myself, I suppose I also have a few curious routines. In my office I have a treadmill that stands across the room from a bookcase that I rigged with a large TV monitor at eye level. On the shelf below the TV monitor I put my laptop and hook it up to the TV so that my screen is magnified many times. Typically I have way too many things open on my desktop! Often I walk while I work… slowly, but at least I’m moving. 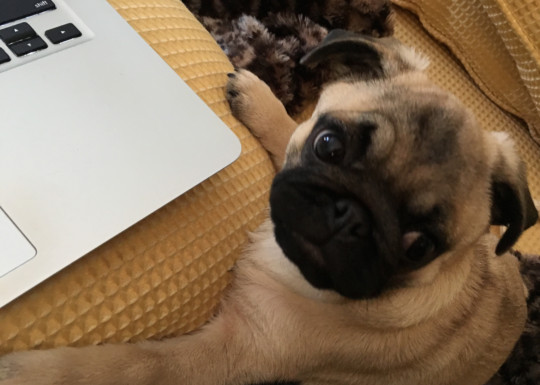 Dixie in a rare alert moment

Other times I work from my bright yellow loveseat with my feet propped on a leather ottoman, or I sit on the floor with my laptop on the ottoman itself. In these two scenarios, my author assistant Dixie is always by my side. She sleeps through most of the writing!

Tell me… What interests you about writers’ routines? Comment below!